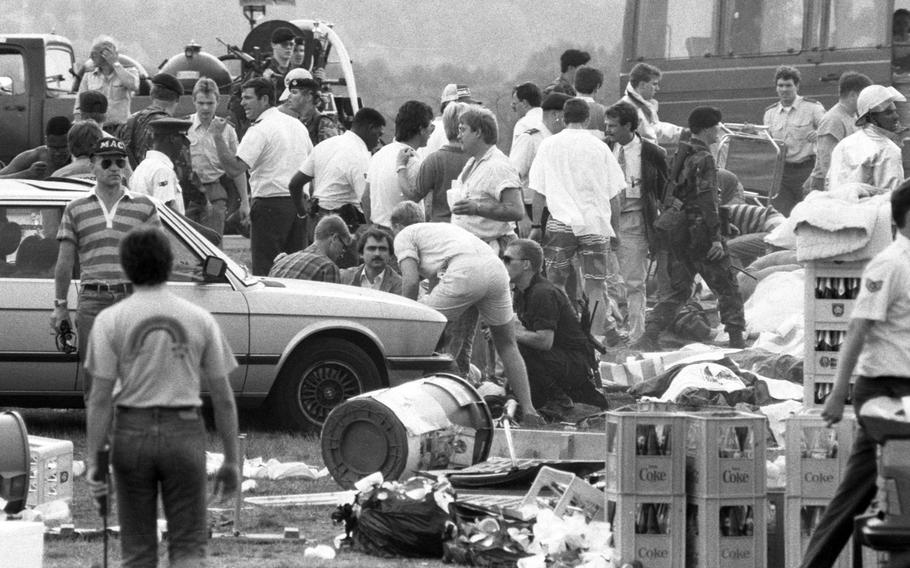 Buy Photo
On Aug. 28, 1988, three Italian Air Force jets from the precision-flying team Frecce Tricolori collided in midair during the final performance of an air show, sending one of the jets into the crowd of nearly 300,000 spectators at Ramstein Air Base. (Dave Didio/Stars and Stripes)

Buy Photo
On Aug. 28, 1988, three Italian Air Force jets from the precision-flying team Frecce Tricolori collided in midair during the final performance of an air show, sending one of the jets into the crowd of nearly 300,000 spectators at Ramstein Air Base. (Dave Didio/Stars and Stripes) 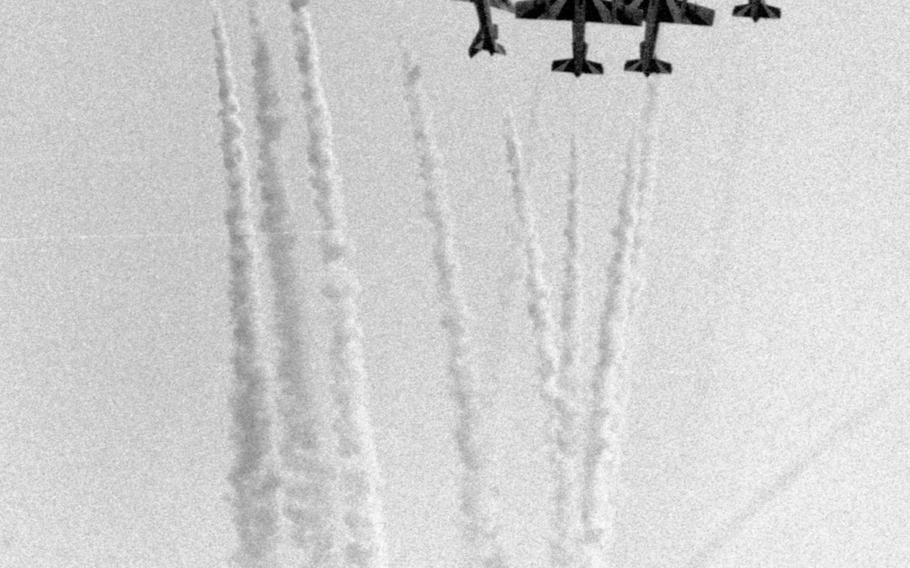 Buy Photo
Italian Aermacchi MB-339 fighter jets perform an aerial maneuver moments before three collided in midair at Ramstein Air Base in Germany, killing 70 people and injuring 450 on Aug. 28, 1988. The jets were part of the precision-flying team Frecce Tricolori, and the crash happened during the show's final maneuver. (Dave Didio/Stars and Stripes) Buy Photo
A woman reacts to an accident that killed 70 people, including pilots, and injured 450 during the final maneuver of the Italian aerial demonstration team at the Ramstein air show on Aug. 28, 1988. (Dave Didio/Stars and Stripes) 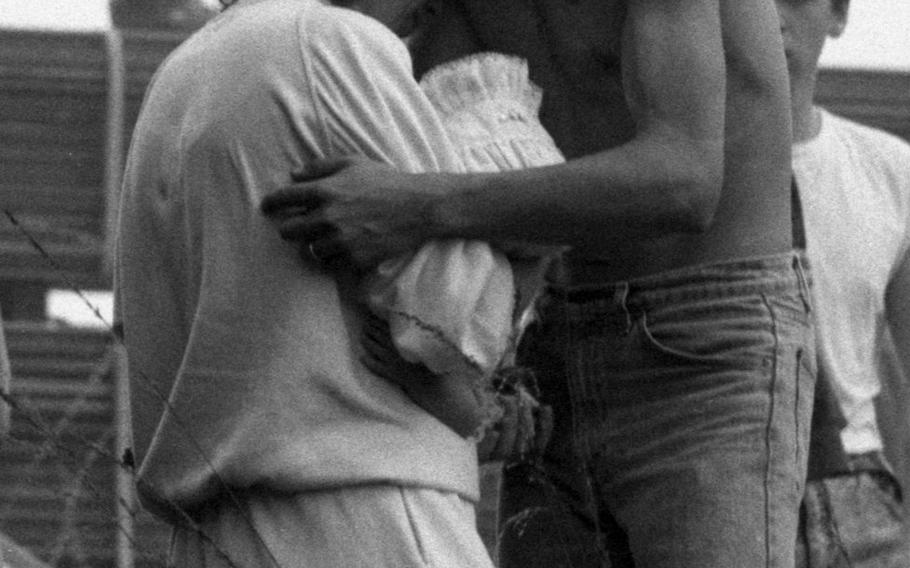 Buy Photo
A woman is comforted after witnessing the crash at the Ramstein air show on Aug. 28, 1988. (Dave Didio/Stars and Stripes) Buy Photo
A victim of the Aug. 28, 1988, Ramstein air show accident is transported for medical attention. (Dave Didio/Stars and Stripes)

I remember the heat most of all.

Aircraft performing a famous maneuver collided, sending debris and fire into a nearby stand and medical area.

My father left the safety of our stands and rushed toward the chaos to help the victims. I didn’t understand then what was going on.

I remember watching him carry a man with a very severe arm injury across the field. I don’t remember if his arm was there or not. I just remember the blood.

Whenever I talk to my mother, she says that I was too young to remember the accident. But to me, it is impossible to forget watching something like that.

The 1988 Ramstein air show accident was the deadliest of its kind at the time. There were 70 fatalities and hundreds more injured.

When the Italian Tricolori team performed their “pierced heart” maneuver, one of the aircraft came in too fast and too low and struck another jet. Wreckage and a massive fireball rolled through the crowd. It destroyed a refrigerated concession area and also killed a pilot in a UH-60 Black Hawk helicopter.

When I talk to my mother, she always tells me the same thing, and it seems like she is still hurt or angry about it. I can never tell which.

“I remember a ball of fire engulfing the two front rows,” she said.

Air Force Staff Sgt. Ann Knowles, my mother, was stationed at Ramstein in 1988.

“You were so small. I remember grabbing you guys and running,” my mother told me recently. “Dad was not near us because we were up towards the front area. I remember the heat was terrible. It was early afternoon I think. You sat on a woman’s lap whose husband was injured while I drove people up to the hospital.”

My father, Richard Knowles, was an Air Force technical sergeant at the time of the accident. He was a civil engineer also stationed at Ramstein.

“My first thought while cooking hamburgers and looking at the Italian aircraft flying were ‘they’re missing the crossing marker by several degrees’ and that was right before they crashed,” my father said during a recent phone call. “My job as an environmentalist was to secure the streams and prevent any contamination from the fuel. Everyone provided support for the medical teams and assisted anyone who was hurt.

“Your mom drove the ambulance, and I helped a little boy who lost his left arm,” he said.

When he told me that, it proved to me that I remembered the incident the way it really happened. That image of my father has been with me for as long as I can remember.

“My thoughts went straight to making sure both you and (your siblings) were safe,” my father continued. “I found two of the downed pilots and secured the rescue helicopter crash site before picking up a dead body supporting the safety and rescue team and the medical coroner.”

When my father got to this point in the story, he had to stop. I don’t blame him. He and I both have the same aversion to blood, but it doesn’t seem to have stopped us from being witness to plenty of it.

On Tuesday, there will be a local ceremony marking the 30th anniversary of the Ramstein air show accident. Being assigned to Germany for a second time feels very surreal as this date approaches, and I can’t help but think about the events that unfolded three decades ago.

One thing is for sure, though: I will never forget how my parents became not only my heroes, but the heroes of those whose lives were changed that day.