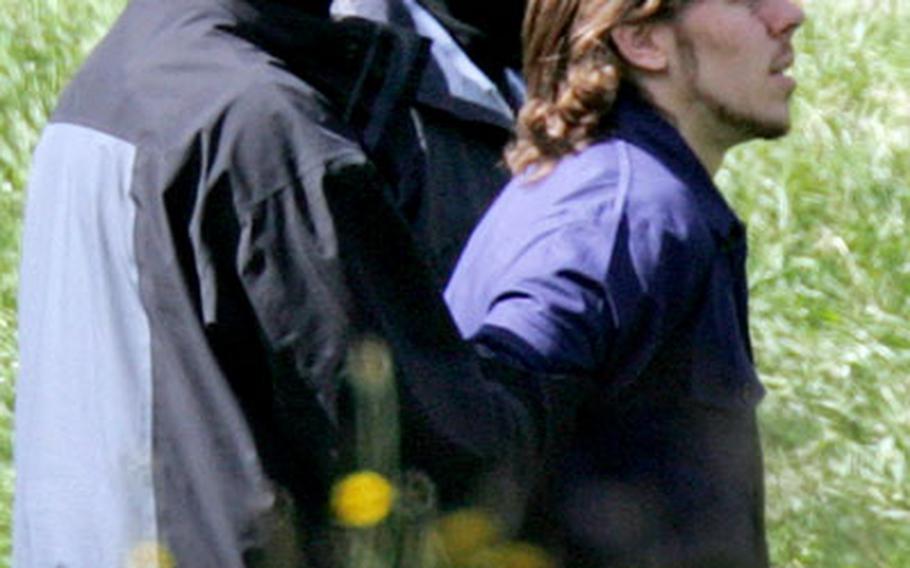 An unidentified man believed to be a terror suspect is led away by masked police at the German Federal Court in Karlsruhe, Germany, on Wednesday. (Michael Probst / AP)

An unidentified man believed to be a terror suspect is led away by masked police at the German Federal Court in Karlsruhe, Germany, on Wednesday. (Michael Probst / AP) 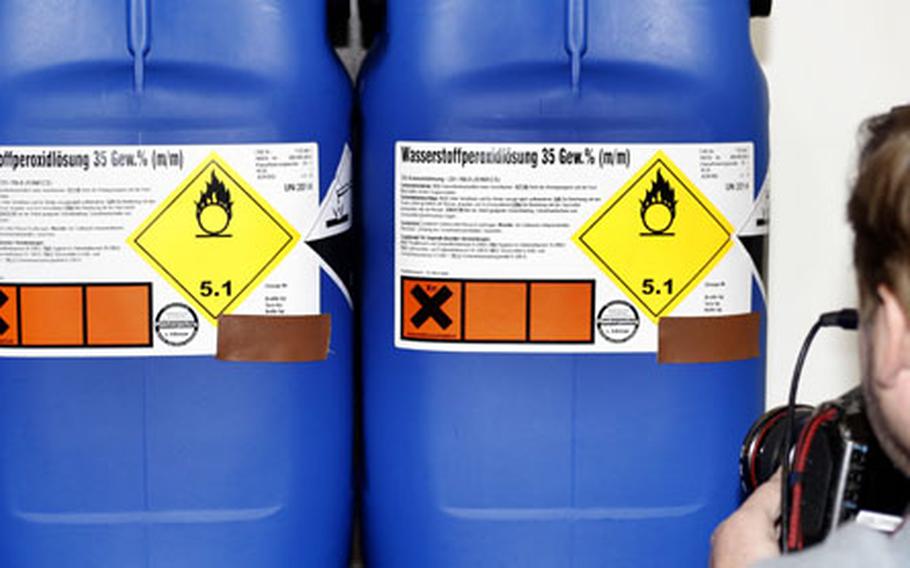 A photographer takes pictures of confiscated canisters labeled as hydrogen peroxide during a press conference in Karlsruhe on Wednesday. (Thomas Kienzle / AP) 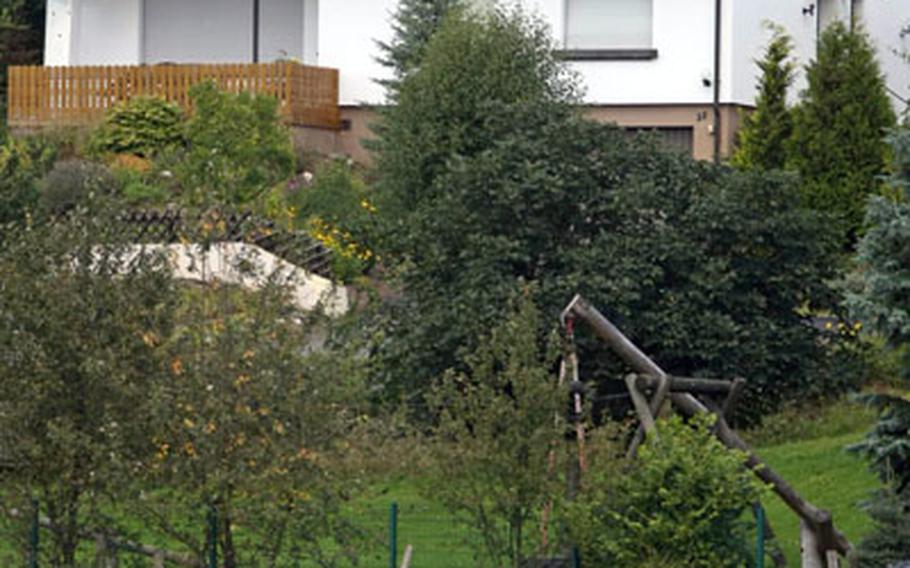 Cows graze in a field in front of a holiday home in Oberschledorn, Germany, where three men were arrested on suspicion of terrorism-related activities. (Eckehard Schulz / AP) 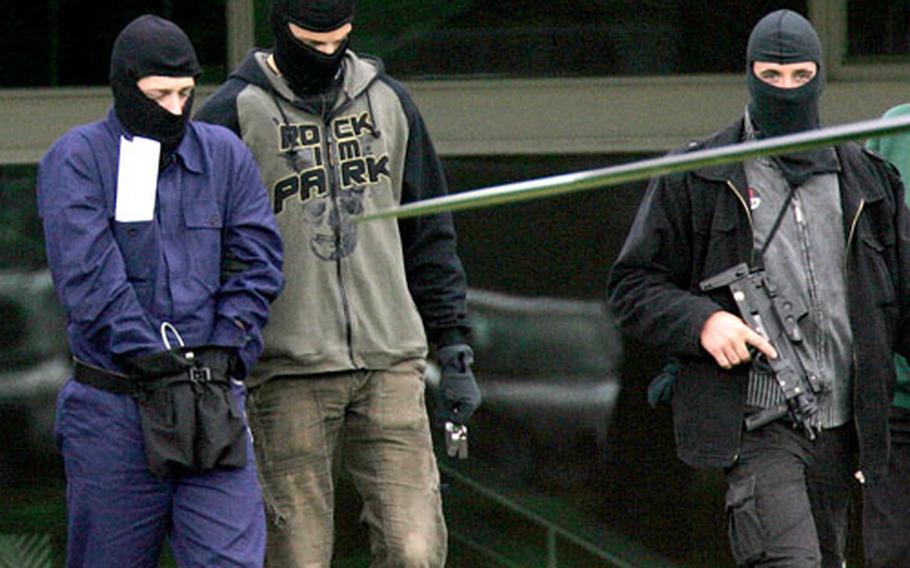 A man believed to be a terror suspect, left, is led away at the German Federal Court in Karlsruhe, Germany, on Wednesday. (Michael Probst / AP) 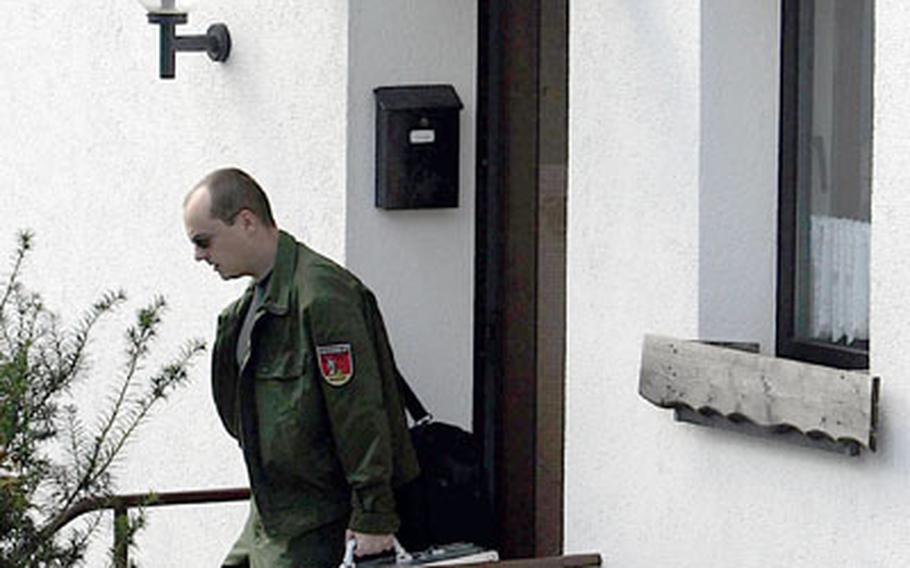 A police forensics officer leaves a holiday home in the village of Oberschledorn. (Frank Augstein/ AP)

An imminent terror attack, which reportedly included Ramstein Air Base as a target, was foiled Tuesday after authorities conducted a series of raids throughout Germany that resulted in the capture of three suspected Islamic militants.

The suspects had been under surveillance for six months, German law enforcement officials said during a Wednesday news conference.

Scores of German police participated in Tuesday&#8217;s investigation, which included searches of 41 properties across the country.

Investigators were prompted to take action Tuesday after the suspects &#8212; two Germans and a Turk &#8212; had recently obtained some 1,500 pounds of hydrogen peroxide, which could be mixed into explosives, German Federal Prosecutor Monika Harms said during a news conference Wednesday.

Officials said the solution of hydrogen peroxide, stored in a hideout, could have been mixed easily with other additives to produce a bomb with the explosive power of 1,200 pounds of TNT.

&#8220;This would have enabled them to make bombs with more explosive power than the ones used in the London and Madrid bombings,&#8221; Ziercke said.

Bars, discos and restaurants frequented by Americans were among the places that could have been targets, German law enforcement officials said.

Numerous media outlets, citing unnamed sources, reported that Ramstein and the Frankfurt airport were targets in the plot.

U.S. European Command in Stuttgart, however, said it had received no information that Ramstein or any other installation was specifically targeted. German authorities also did not name specific installations during the news conference.

In Washington, a senior U.S. State Department official said German investigators had determined the Frankfurt International Airport and the nearby U.S. Ramstein Air Base were the primary targets of the plot but that those arrested may have also been considering strikes on other sites associated with the United States, the Associated Press reported.

Still, the U.S. military and German authorities have warned for months that there is an increased terror threat posed to U.S. installations throughout Germany.

The three suspects &#8212; two Germans, age 22 and 28, and a 29-year-old Turk &#8212; first came to the attention of authorities because the men had been observing a U.S. military facility in late 2006, officials said. All three had undergone training at camps in Pakistan run by the Islamic Jihad Union, and had formed a German cell of the group.

The Islamic Jihad Union was described as a Sunni Muslim group based in Central Asia that was an offshoot of the Islamic Movement of Uzbekistan, an extremist group with origins in that country.

At least one of the suspects arrested Tuesday matches the description of a militant named in a warning issued to some military personnel early this year.

The BOLO &#8212; given to personnel guarding U.S. bases &#8212; contained their photographs, passport numbers, birth dates and cars they might be driving. One was a 27-year-old German; one was a 22-year-old man of Turkish origin but with a German passport. Both had been arrested in January 2005, according to the BOLO. The third man was a 23-year-old Iranian.

German officials do not release the full names of criminal suspects. However, Spiegel Online reported that a &#8220;Fritz G&#8221; was among those arrested. The BOLO names Fritz Martin Gelowicz, a 28-year-old German, who was arrested on Jan. 12, 2005.

Following the issuing of the BOLO, the U.S. Embassy put out a warning on April 20 of an increased terrorist threat and increased its own security.

However, U.S. officials did not increase the threat level at European installations and had not done so following Tuesday&#8217;s arrests.

&#8220;Bravo&#8221; indicates that an increased and more predictable threat of terrorist activity exists.

The military was kept apprised of the investigation from the beginning and informed of the new developments shortly before Tuesday&#8217;s arrests, according to EUCOM.

The military, however, did not have any involvement in the investigation, Gradeck said.

The men were taken into custody at a vacation home in the small town of Oberschlendorn, north of Frankfurt. Two of the man were captured without incident. A third was caught after attempting to escape through a bathroom window.

Stars and Stripes reporter Lisa Burgess and The Associated Press contributed to this story. Marcus Kloeckner provided translation services for this story.