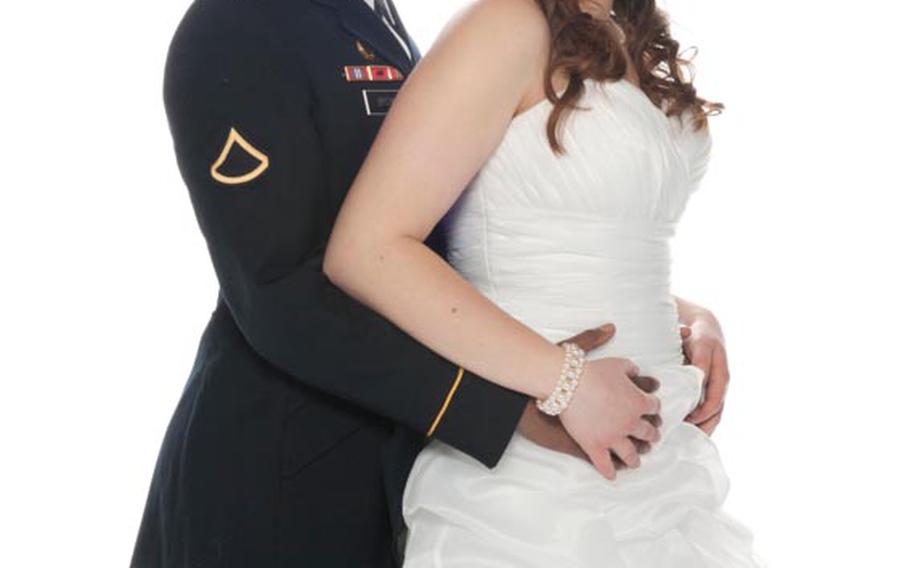 On Jan. 12, 2013, Pfc. Rogerica Brown, a military police officer in Stuttgart wed Tanja Linhart, a German international business student. It was a civil-union service at a German courthouse followed by a reception at the banquet hall on the military's Patch Barracks. (Courtesy Pfc. Rogerica Brown)

From Japan and South Korea to countries across Europe, it’s a story that’s been around as long as the military has operated garrisons overseas, and deployed young troops to man them.

Now, with gay servicemembers permitted to live out in the open, there’s a new twist. And as one young couple is learning, there are still lots of wrinkles to iron out.

Last month, Pfc. Rogerica Brown, a military police officer in Stuttgart, dressed in her formal Army blues for her wedding with German girlfriend Tanja Linhart, an international business student. It was a civil union service at a German courthouse followed by a reception at the banquet hall on the military’s Patch Barracks.

But as the newlywed couple partied, reality of the challenges ahead set in.

The two met in September 2011 and began dating that November. Brown knew right away that Linhart would be the one she’d marry. Linhart, who Brown says is the more responsible of the two, knew it was too soon. But after a year of dating, they were ready.

Now, the couple is preparing for a potentially long separation. Brown has orders to report to Fort Campbell, Ky., in March. She will begin her permanent change of station process at the end of February after failing to obtain a tour extension, something Brown has petitioned her command about for one year.

“I’m trying to extend here until she’s done with college,” said Brown during an interview at her wedding reception. “I want to finish my last three years in my military tour here. And they’re not actually agreeing with that so much. They said the only way they can approve my extension here is if it’s personal hardship.”

The two have explored options for bringing Linhart to the U.S. without the military’s support. But with the Defense of Marriage Act, same-sex marriages are not recognized by U.S. immigration law. Brown will not be able to petition a spouse visa for her wife. Their only option is that Linhart is accepted by a U.S. college and thus could apply for a student visa, but the expenses of college and off-base housing make the idea financially untenable, the couple said.

“I go to Campbell for a year,” Brown said. “And then they said for me to come back to Germany, I’d have to re-enlist four more years in the Army. And they said it’s not even guaranteed that I’d get to come back to Stuttgart. So it’s kind of a hit or miss if I do that.”

Linhart said the couple is still holding out hope for a hardship extension, but it doesn’t look good. “We have a long list of reasons like money issues,” Linhart said. “And we don’t know what they can say against that because it is personal hardship.”

Brown said her command, for the most part, has tried to be supportive. But the extension process is confusing and fraught with misinformation, she said.

Now, the couple is preparing for the likely possibility that just a couple months after their civil union, they will be forced into a long-distance relationship instead of moving back to the States together like their straight counterparts.

“Well it’s going to be tough because of the time difference,” Linhart said. “And we’re both working, and she has different shifts. But yeah, we’ll probably see each other once or twice a year then.

“We just gotta stay strong, because we love each other,” Linhart said. “Distance will not change that.”