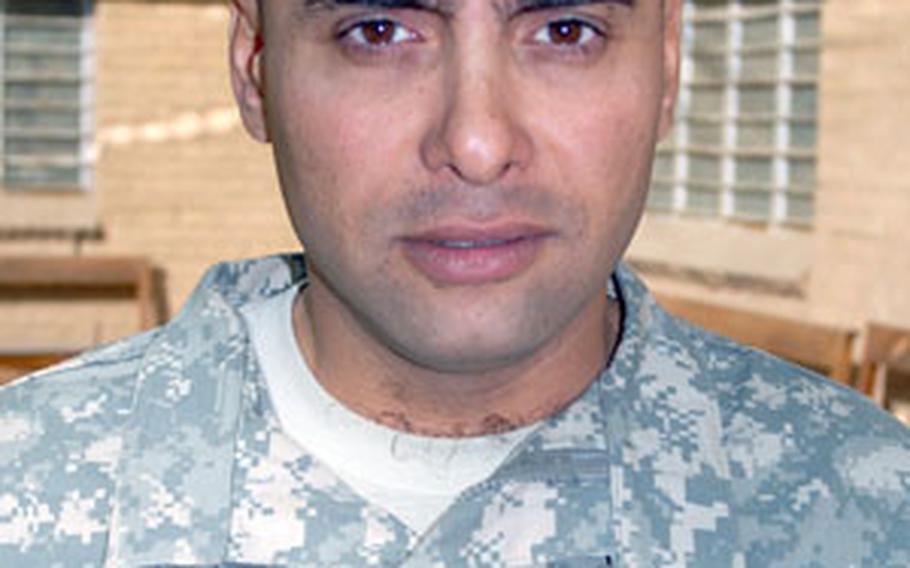 Zahed, who&#8217;s married to an American, got a U.S. green card and a job in a Michigan car-parts plant that paid $6,000 a month, money that helped him support family members in Iraq.

But in 2005, his aunt, who worked for the Iraqi Ministry of Defense, was killed. And his father, a former Iraqi army major general, was threatened and forced to flee to Syria. Several other family members also died in the violence sweeping the country, Zahed said.

On a trip home, he was horrified by what he saw. &#8220;I saw my old neighborhood and my people destroyed. It was not the U.S. Army who destroyed them. Some strange people came from outside the country and started destroying my hometown step by step and killing my people,&#8221; he said.

When he returned to the U.S., Zahed, who says he had served two years in the Iraqi army under Saddam, called his father to ask his opinion about working for the coalition in Iraq as an interpreter.

Then Zahed saw a television advertisement seeking native Arabic speakers to join the U.S. Army as translators. Fewer than 20 Iraqis serve with the U.S. Army in Iraq, according to Zahed, but those who do provide fellow soldiers with valuable insights into the local culture.

Zahed spent a year at U.S. military language schools and in basic training before returning to Iraq as a U.S. soldier.

Now he&#8217;s working with the 2nd Cavalry (Stryker) Regiment in Baghdad, helping soldiers bring Sunnis and Shiites together at reconciliation meetings and finding out what local Iraqis want in terms of essential services such as electricity, water and sewage.

Zahed goes by the name Ivan when he&#8217;s interpreting, so Iraqis will not misread his intentions based on his Sunni family name. Zahed recommended bringing the best locally hired civilian interpreters and their families to the U.S. and giving them the same training he&#8217;s received.

&#8220;We can get more value from them. The local Iraqis are better than interpreters that come from the States. They live in the neighborhoods and they know where the insurgents hide their weapons and where snipers can be,&#8221; he said.

Allowing interpreters to immigrate to the U.S. would shield them from insurgents who often threaten their families in an effort to turn them against U.S. forces, he said.

Cox said he&#8217;d support preferential immigration treatment for interpreters who perform well and signing up as many as possible to join the Army.

&#8220;The 09 LIMA program is a great program. It gives us a native Arabic speaker that is a part of the U.S. Army and under all the rules and regulations and the UCMJ (Universal Code of Military Justice). They are definitely people you can trust more and they have a vested interest in performing well because it is tied to their advancement in the Army,&#8221; he said.

Soldier interpreters are less motivated by money than the civilians, he said.

&#8220;They are typically very proud to be U.S. soldiers and they care about the mission. Ivan is especially valuable due to his background as a resident of Iraq,&#8221; Cox said.

Zahed is positive about the future of his former homeland. &#8220;If the Army continues to do reconciliation like we are doing now and improving services in Iraq, the country will have a better future,&#8221; he said.