Immersion available in schools off base 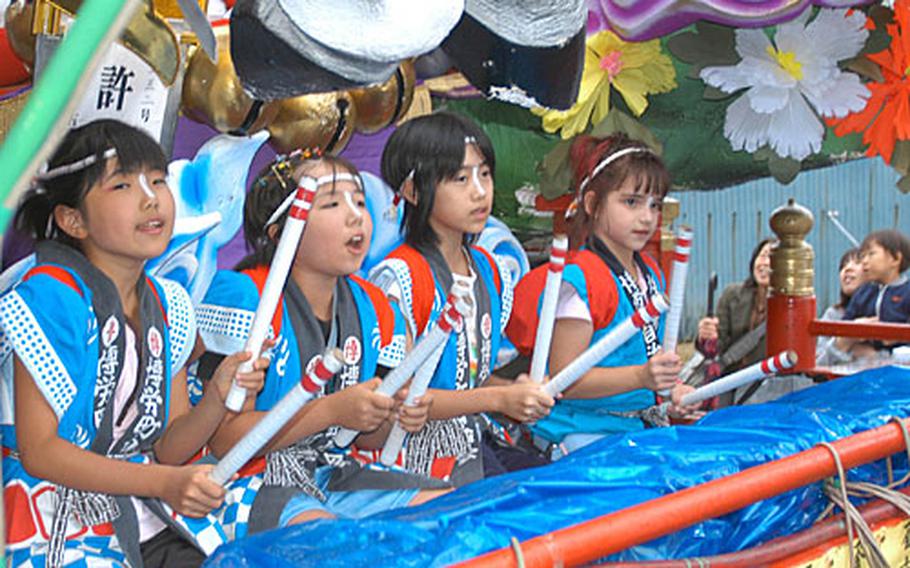 Buy Photo
Emily Reams, 8, far right, plays the taiko drums while sitting on a parade float during a festival Sept. 2 in the northern Japan town of Gonohe. Reams, whose parents work on Misawa Air Base, was the only American playing taiko in the festival. Reams has attended Japanese school since the age of 3 and is fluent in the language. (Stars and Stripes / S&S)

But that didn&#8217;t stop Trish and Shawn Reams from enrolling their daughter into Dai Ichi Yochien, a Japanese preschool near Misawa Air Base.

Emily, who is 8, is now in the third grade at a Japanese elementary school.

Trish and Shawn, a Navy lieutenant with Task Force 72 on Misawa, decided to keep their daughter in Japanese schools because she liked the culture and because Trish, who grew up in Bermuda, was more familiar with Japan&#8217;s more structured, British-style schools.

The arrangement has taken investment in money and time, as well as cooperation from the Japanese schools, Trish Reams said. It&#8217;s also taken commitment from the family to participate as much as other Japanese parents in Emily&#8217;s schooling and to accept that Emily is growing up in a different culture.

Some local schools and preschools in South Korea and Japan will accept English-speaking students. But parents also should consider the extra work a foreign student can put on teaching staff, said Atsuko Ikehara, principal of Eiko Kindergarten outside Kadena Air Base.

At Eiko, the school ensures parents agree to enroll their children for a full school year, and parents also are required to have an interpreter available, she said.

For families such as the Reams, Japanese schooling has become a full-time commitment.

When Emily first went to preschool, she didn&#8217;t know how to dress herself. But in her Japanese school, the teachers expected the toddlers to be able to take off their school uniform and put on a play uniform.

The Reams hired a translator to answer phone calls from the preschool, and later the elementary school, throughout the day. At 4, Emily began kumon, an after-school program, and the family hired a weekly tutor to help her with kanji, Chinese writing characters.

When Emily entered first grade, her mom learned about the importance of artfully prepared lunches in bento boxes.

&#8220;It wasn&#8217;t just put a peanut butter and jelly sandwich in there,&#8221; Reams learned. A few mothers showed her how to buy most of the foods already prepared, she said.

The Reams also had to spend money, first on the preschool (about $220 a month) and later on uniforms, lunches and other supplies for the elementary school. Her backpack, for example, was $350. But it&#8217;s supposed to last six years, and after three, it still looks new, Trish Reams said.

Emily&#8217;s spoken English is strong, and she&#8217;s served as a translator on base during Special Olympics, her mother said. But this year, she&#8217;s getting tutored in reading and writing English because the family is to move to Brunswick, Maine, in April.

But the move will affect the whole family. Both parents volunteer at the school, and the family also volunteers at Japanese nursing homes. This fall, Trish and Emily are taking traditional Japanese dancing together.