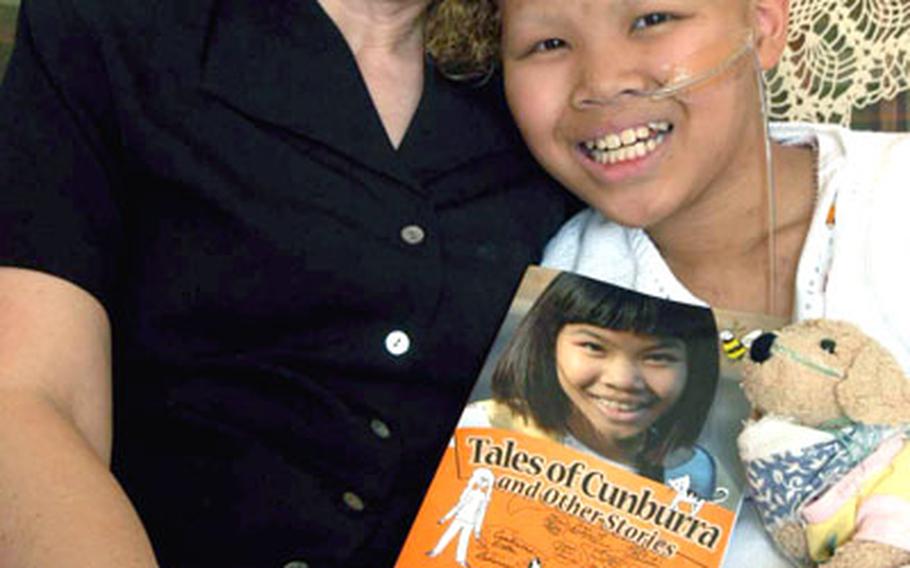 Kara Grace Manjian Siert with her mother Linda, stuffed dog Douglas and a copy of her new book, "Tales of Cunburra and Other Stories," published in May. (Ben Murray / S&S)

RAF LAKENHEATH &#8212; She was a cautious 9-year-old with an active imagination and a voracious appetite for writing when her upper arm started to hurt last summer, but she didn&#8217;t complain because she was terrified of the hospital.

&#8220;That&#8217;s what I told everybody, because I was scared of the doctor,&#8221; said Kara Grace Manjian Siert, now 10, who lives at RAF Lakenheath with her parents Linda and Maj. Ward Siert, of the 48th Medical Operations Squadron. The couple adopted Kara from China as an infant.

Then it began to hurt so bad that she had to go to a clinic where she learned that she had bone cancer. Suddenly, she was too sick to even write.

But by the time Kara was diagnosed with malignant osteosarcoma last August, she had already penned hundreds of pages of original stories on her parents&#8217; home computer, and had a dream to see them published.

At 237 pages, it&#8217;s an impressive compilation of tales based mostly in the made-up world of Cunburra, where animals talk and characters such as the Great Buffalo King and the Evil Lady of the Sea abide.

Drawing on literary influences such as C.S. Lewis &#8212; author of the &#8220;Narnia&#8221; tales and one of her favorite writers &#8212; Kara&#8217;s tales often follow the escapades of red-haired adventurer Nancy through such places as Cakeville, Brownieville and the wicked Closed Door Land.

The stories were largely written last year, her mother said, and she and her daughter realize that, ironically, her disease is what made the publication of the book an immediate priority and a possibility.

A diagnosis of cancer is about as tough as it can get for a girl who&#8217;s afraid of hospitals, where Kara has spent about 180 days since last October, her parents estimate.

Partway through her treatment, doctors removed most of her right upper arm bone &#8212; from the shoulder joint to just above her elbow &#8212; to stop the spread of the disease, and replaced it with a titanium one.

The procedure has left her partially debilitated. Kara can no longer raise her arm above her head and she can never lift anything heavy with it again. But her fingers still work fine, and the limited movement doesn&#8217;t faze her, she said.

Surgery was just the beginning, however. As soon as doctors started Kara on a rigorous course of chemotherapy, she contracted chickenpox and had to be hospitalized. And even when that was over, the chemo made Kara so sick that she had to have a feeding tube inserted through her nose to keep her weight up. She still uses one.

She is also completely hairless from the treatment, minus even her eyelashes, but things are looking all right, her parents said.

Doctors have finally found a mix of anti-nausea drugs that work for her, and, ideally, she will be done with chemo in July.

&#8220;Her chances are looking pretty good right now, but one of the chemotherapy drugs has caused heart damage,&#8221; Ward Siert said.

Despite the illness and the treatments, Kara is buoyant, talkative, cheerful and mature. She&#8217;s met kids her age who can&#8217;t be treated for their cancer. She knows things could be worse, she said.

She also likes being bald, she said, doesn&#8217;t mind losing some arm function (she didn&#8217;t like sports anyway), and she can still write all she wants &#8212; a potential second book has already been mentioned.

The biggest obstacle hampering another book? She&#8217;s got so many ideas that she can&#8217;t finish a story before moving on to the next one.