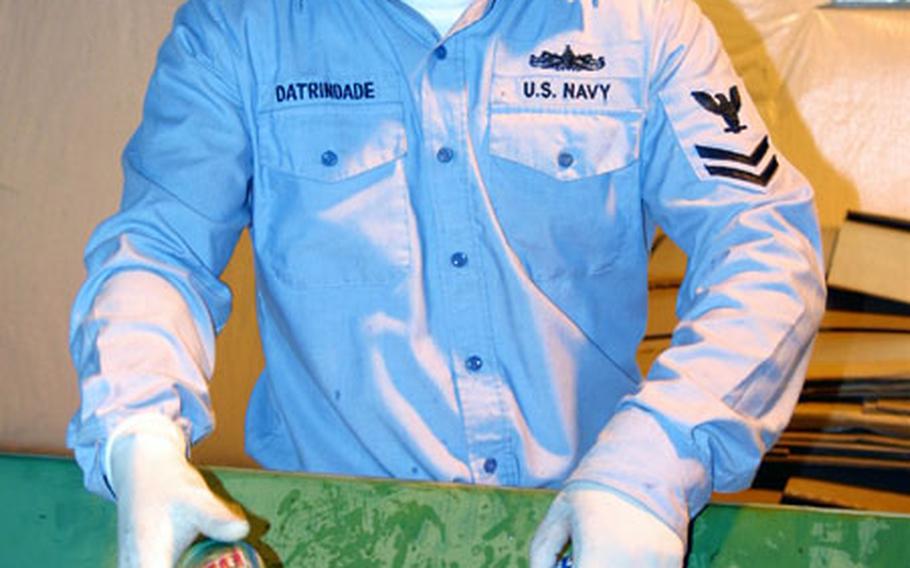 Months ago, a woman burst into the Fleet and Family Support Center at Yokosuka Naval Base in Japan and demanded help from Japanese staff member Nao Aoki, the intercultural relations training technician.

She lived off base, she told him, and was tired of discrimination from Japanese trash haulers. Every time she dragged her garbage to the curb, trash collectors wouldn&#8217;t take it away, she said.

Aoki heard it before. For years, Americans clumsily navigated through the Japanese trash and recycling system, which involves separating items into as many as 18 categories and putting them outside at precise times. There&#8217;s no room for error.

Japan&#8217;s intricate recycling systems are essential in a country smaller than California with 3&#189; times its population. To reduce landfill use, a greater burden is placed on residents to recycle.

The burden can exasperate Americans living off base. To avoid it, some lug their trash on base to dump it, often illegally, causing trouble for base waste-disposal agents.

In other cases, those living on bases don&#8217;t separate properly. That costs time, money and effort for base officials, who have to separate it later or fix incinerators damaged by improper separation.

&#8220;People just don&#8217;t take the time,&#8221; said Butch Malone, mechanical and sanitation chief for the Directorate of Public Works, Operations and Maintenance Division at Camp Zama, Japan, where about a third of the trash picked up on base is improperly separated.

At Kadena Air Base on Okinawa, which controls all military housing on the island, officials spend about $2 million on unauthorized trash dumped each year.

At Marine Corps bases on Okinawa, officials are considering locking up trash enclosures to keep unwanted garbage out.

Marines on Okinawa pay more than $300,000 alone for illegally dumped bulky items such as mattresses and appliances. That amount doesn&#8217;t even consider ordinary garbage illegally dumped by off-base residents, which is indistinguishable from authorized garbage, Vincent said.

Officials at Camp Foster, Okinawa, responded by locking up enclosures to keep out unauthorized dumpers, Vincent said. Other Marine bases, he added, could soon do the same.

The problem has driven other bases to come up with creative coercion.

Long ago at Yokosuka, open Dumpsters were overflowing, creating a mess and a cleanup expense. Base leaders instituted a stiff penalty to help stop it: motorists caught with bagged trash in a car when entering Yokosuka face a 30-day suspended license.

Base officials maintain a dump site for large-item disposal so those off base don&#8217;t have to pay to discard old televisions, furniture and other large items.

At Yokota Air Base, Japan, leaders cracked down on off-base residents when the landfill began filling too quickly.

The landfill wasn&#8217;t designed for off-base residents&#8217; use. And off- base residents receive an extra allowance for their Japanese trash bills, Kirk said.

So the base beefed up efforts, instructing security to look for violators as they entered the base and threatening to penalize those who broke the rule. They worked with the local cities to produce pamphlets in English instructing off-base residents on the myriad trash rules in Japan.

The education and training worked, Kirk said. People haven&#8217;t been found with trash since the changes were emphasized last year.

Camp Zama in Japan is another success. Two years ago, more than two-thirds of the garbage collected was not correctly separated, allowing nonburnable items to reach and damage the furnaces and incinerator. Much of it came from off base.

The base commander prohibited residents from bringing trash on base and instructed security at the gates to actively look for trash in cars, Malone said.

The process worked and off-base residents have all but stopped dumping. But Malone is finding on-base residents are also at fault. About a third of the collected on-base garbage is still not separated. Nonburnables that reach the incinerator wreak havoc, causing $300,000 in damages last year, he said.

Many bases stopped the flow of garbage onto bases, but they still produce too much. The Okinawa Prefecture in June asked base leaders to curb their overall contributions to the prefecture landfill.

Some bases, including Atsugi Naval Air Facility and Sasebo Naval Base in Japan, have found a way to reduce trash and earn money through on-base recycling centers. Sasebo is expected to earn about $250,000 from its center this year, said base spokesman Charles T. Howard. The money goes to base improvement projects.

The centers make it easy for people to separate and recycle.

Where people must separate and recycle at home, it&#8217;s not so smooth. At Yokota, like Zama, attention has moved from off-base trash to on-base. Residents on base are not sorting their trash, causing material that could be recycled to end up in the landfill.

The problem, Kirk and others say, is Americans aren&#8217;t doing their part.