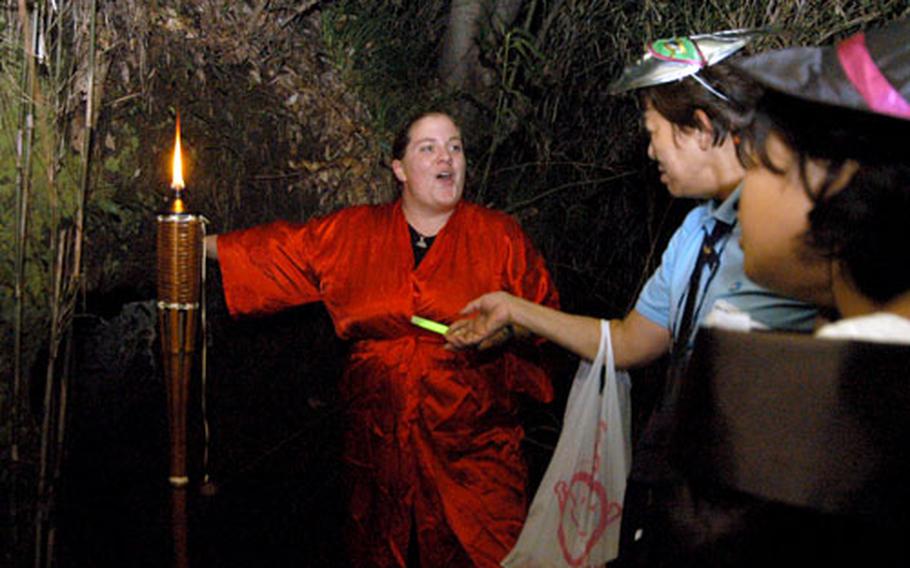 ZUSHI CITY, Japan &#8212; This summer, a woman called Ikego West Campground security saying she had seen a ghost standing in the road near her campsite.

Another report came from the East Valley &#8212; two men had seen something strange, ghostly. One set of campers didn&#8217;t realize what they&#8217;d seen until they developed their pictures from their Ikego camp-out and a phantasmal shape emerged on the print.

This past weekend&#8217;s Haunted Forest and Harvest Festival drew in about 800 people, many of whom braved a hair-raising tour through the campground. It was MWR&#8217;s first large-scale Haunted Forest production there, Rhinehart said. But even without volunteers springing from bushes and making bamboo trees hiss, people &#8220;legitimately&#8221; believe the place is haunted for a host of reasons, Rhinehart said.

The 710-acre forest is listed under Japan&#8217;s &#8220;Haunted Places&#8221; on theshadowlands.net as a place of mass executions during WWII when the Japanese Imperial Army used the area as an ammunitions depot and prisoner of war camp. MWR omitted that information in the tour to be sensitive, Rhinehart said.

But according to the Shadowlands Ghosts and Hauntings Index, gate guards have reported voices, footsteps, eerie feelings and the recurring appearance of a &#8220;World War II Japanese soldier in a brown uniform with no legs between the gates,&#8221; the Web site said.

Ikego has about 50 of them, Rhinehart said. They were constructed in the 16th and 17th centuries and human bones and pottery have been found inside, according to the Ikego Museum.

The thickly-wooded area was also home to many samurai warriors during the Kamakura shogunate from 1192 to 1333. Ikego was considered a subdivision of Kamakura and the samurai set up checkpoints along the path that connected the forest to the city. Fighting erupted in the hills when warring factions seized Kamakura and mass suicides &#8212; by immolation, beheadings and seppuku (eviscerating oneself) &#8212; followed after the city fell in 1333.