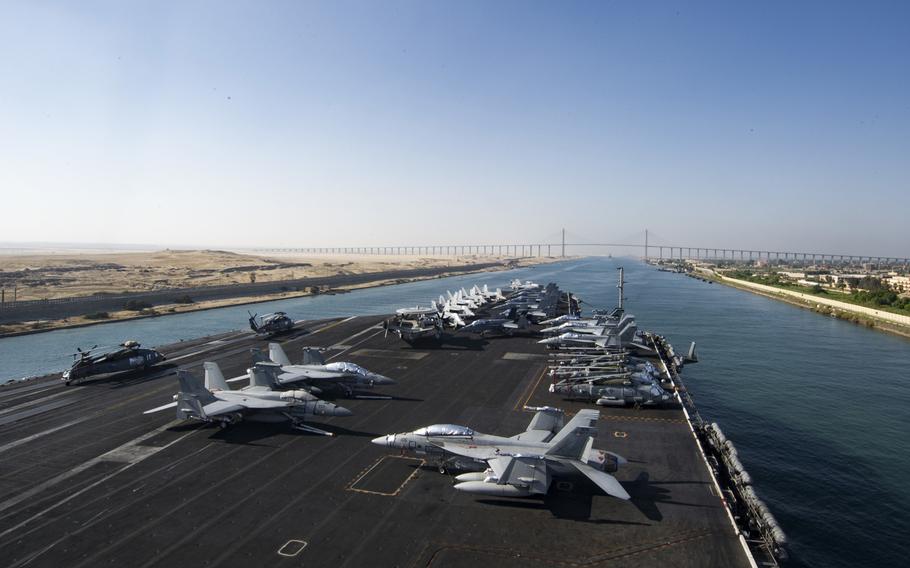 The aircraft carrier USS Dwight D. Eisenhower approaches the Friendship Bridge as it transits the Suez Canal. The Eisenhower moved into the 5th Fleet area of responsibility after concluding operations in the Mediterranean Sea on July 7. (Dartez C. Williams/U.S. Navy)

The Eisenhower, its embarked Carrier Air Wing 3, the guided-missile destroyer USS Nitze and the guided-missile cruiser USS San Jacinto moved into the region after concluding operations in the Mediterranean Sea on July 7, the Navy said in a statement. The air wing has completed 116 sorties in support of the coalition air campaign against the Islamic State in Iraq and Syria since June 28.

While in 5th Fleet, the strike group will conduct maritime security operations and continue to support the air campaign for Operation Inherent Resolve, the Navy said.

The USS Stout was escorting the USS New Orleans through the Strait of Hormuz on Monday as Iranian vessels approached while the U.S. Central Command chief Gen. Joseph Votel was onboard.

The Ike carrier strike group is the first to deploy under the new optimized fleet response plan, the Navy’s effort to prepare the fleet to meet combatant commander needs without straining ships. The 5th Fleet’s area of responsibility covers an area of some 2.5 million square miles, including the Persian Gulf, Red Sea, Gulf of Aden, Gulf of Oman and parts of the Indian Ocean.