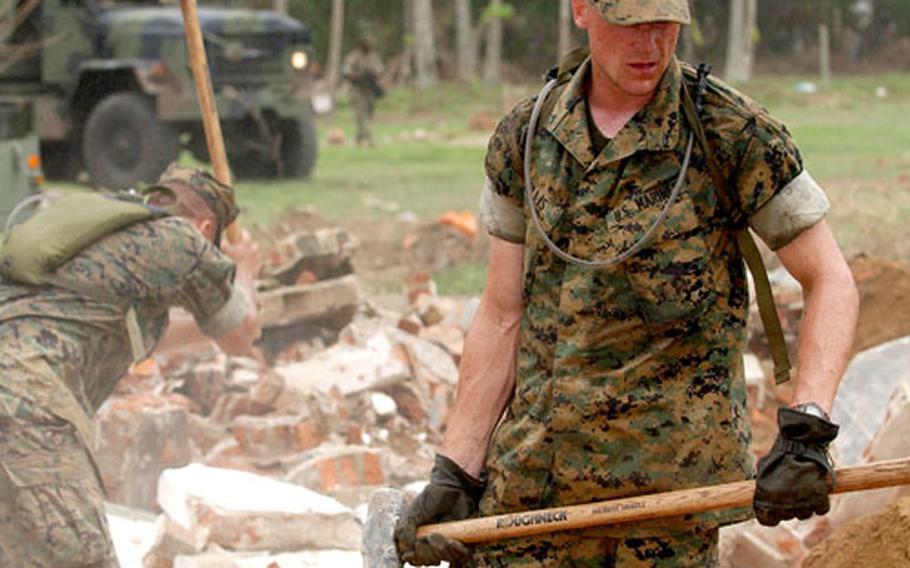 Okinawa-based Marines with the 9th Engineer Support Battalion demolish concrete walls in Galle, Sri Lanka, on Jan. 22, 2005, at a school severely damaged during the Dec. 26, 2004, tsunami. (Stars and Stripes)

CAMP FOSTER, Okinawa &#8212; Marines and sailors with III Marine Expeditionary Force units who took part in Operation Unified Assistance are eligible for the Meritorious Unit Commendation ribbon, according to a Marine message on Wednesday.

Combined Support Force 536, a joint effort of all four branches of the U.S. military, responded for Operation Unified Assistance. The force delivered more than 9.5 million pounds of relief supplies and treated more than 2,230 people, according to the U.S. Pacific Command.

More than 2,125 Marines and sailors with Marine Expeditionary Force units participated in the operation and are eligible for the award, said base spokesman Gunnery Sgt. Charles Albrecht.

The West Coast-based 15 Marine Expeditionary Unit, consisting of 2,200 Marines and sailors, also supported the operation and its troops are eligible for the award.