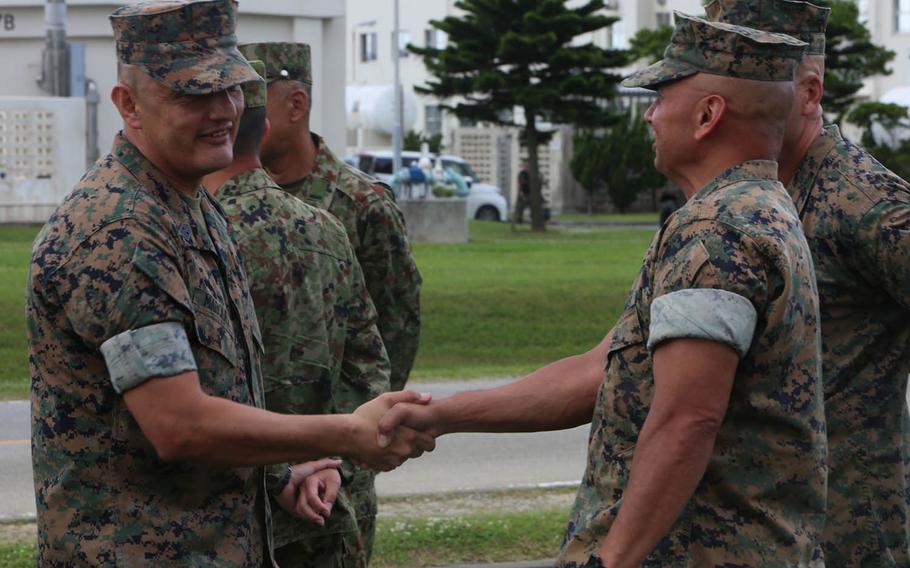 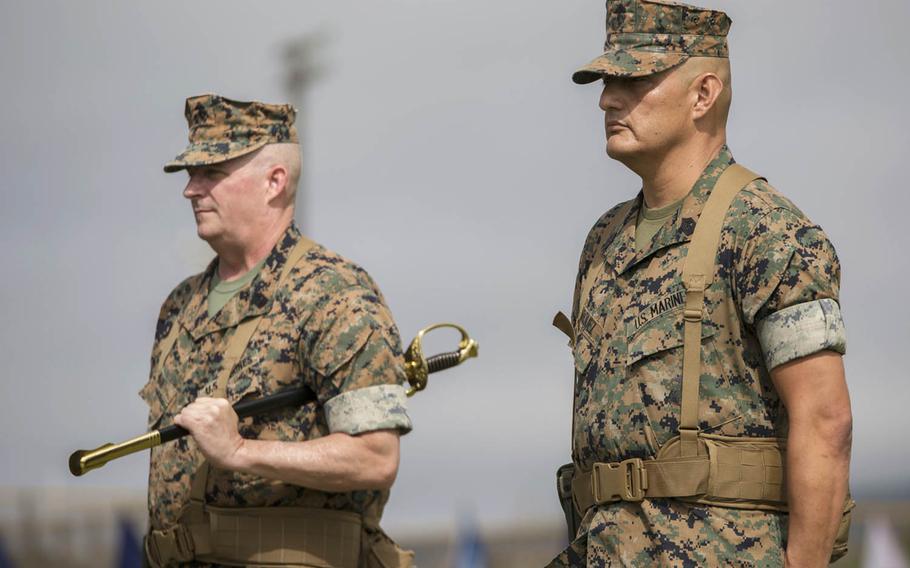 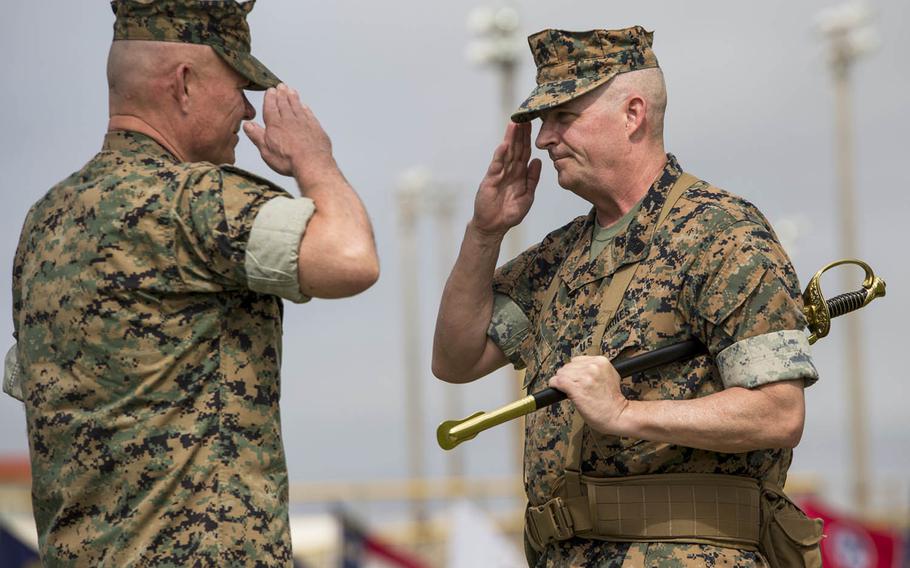 Sgt. Maj. Mario Marquez has served on the island in each of the past three decades, for almost 14 years total. He speaks and writes Japanese, his wife is Okinawan and he has participated in nearly every local tradition Okinawa has to offer.

Marquez, who took over for Sgt. Maj. Lee Bonar Jr. on Friday, said he plans to use his life experiences to create opportunities for his Marines.

He hopes to build character and skills through more contact with Okinawans, along with mentorship programs and training.

Marquez said he believes these initiatives will produce well-adjusted and culturally savvy Marines, who are more able to deploy and fight at a moment’s notice if necessary.

“I’ve been married to [Okinawan] culture for about 22 years,” Marquez said during an interview Thursday with Stars and Stripes. “It’s important for me — not only for our Marines but for our entire community here on Okinawa and Japan — to really embrace the culture … You’re going to hear me talk a lot about that the next couple of years.”

Marquez plans to bring Marines into remote Okinawan villages and expand a community relations program that saw 147 events in orphanages, children’s homes, clinics for the disabled and medical centers in March 2016 alone.

III MEF performs the most hours of community service in the entire Marine Corps, he said.

“I’m pretty proud of that but we can do better,” Marquez said.

“Culturally indoctrinated Marines make better individuals and more educated individuals worldwide. You can deploy a Marine from III MEF anywhere in the world and they will be effective, and that’s kind of my goal.”

Marquez also plans to encourage an unofficial “adoption” system where enlisted leaders and their families bring groups of single sailors and Marines into their homes for holidays and special events. He believes this family environment will create a more cohesive fighting force.

Marquez said he hopes to increase exercises and training missions as well.

“You’re going to see more deployments with senior enlisted being the key and primary leader,” he said. “You’re going to see a lot more [non-commissioned officer]-led missions from missions even within missions. What a better way to build and develop our future leaders by putting them out there and testing them and letting them showcase their skills?”

The III MEF sergeant major post is tasked with representing the wishes and orders of III MEF commander Lt. Gen. Lawrence Nicholson to the enlisted ranks.

Marquez and Bonar said this often means not just relaying the orders and making sure everyone understands them, but also explaining their intent.

They also must build morale and ensure readiness — no small task in a force of about 30,000.

Bonar is retiring to North Carolina after nearly 33 years of service. In his three years on Okinawa, Bonar said he is most proud of growing joint operations with regional forces as well as combining the professional military academies among services.

Bonar also helped create the Okinawa Joint Experience, which happens twice a year and brings together emerging enlisted leaders from each service branch to teach each other about their roles in the Pacific force.

Marquez was born in Guadalajara City, Mexico, and enlisted out of Lakewood, Calif., in 1989.

He comes to his new post from the 1st Marine Aircraft Wing, where he served as command sergeant major. The Bronze Star recipient deployed repeatedly during Operation Iraqi Freedom and later supported sailors and Marines deployed to fight Islamic State.

Marquez participated in the Japanese Officer Exchange Program in Kobe and Osaka, Japan, and has participated in humanitarian missions ranging from the Hanshin Earthquake in 1995 to Operation Tomodachi, which followed the Great East Japan earthquake in 2011.

“We always want the next generation, and those prior years, to produce a better leader, and that’s why I’m very excited Sgt. Maj. Marquez is going to be the new III MEF sergeant major,” Bonar said. “He’s the right guy for the job and he’s going to take us to the next level.”