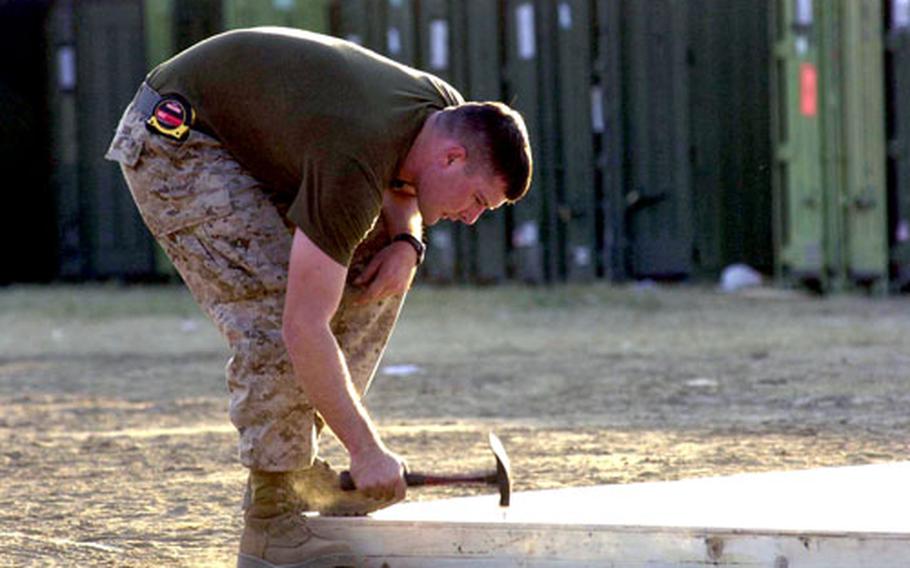 Cpl. Richard Book, a combat engineer with 9th Engineer Support Battalion, puts together a piece of decking in Shinkiari, Pakistan, just hours after arriving at the camp. (Fred Zimmerman / S&S)

Cpl. Richard Book, a combat engineer with 9th Engineer Support Battalion, puts together a piece of decking in Shinkiari, Pakistan, just hours after arriving at the camp. (Fred Zimmerman / S&S) 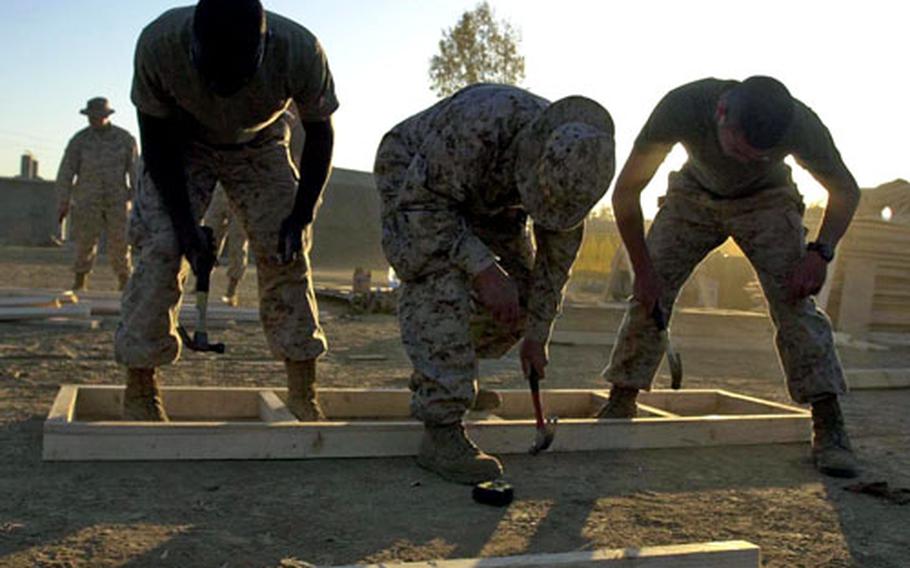 Two Marines and a sailor hammer together a frame to a piece of decking for the III Marine Expeditionary Force’s field medical facility in Shinkiari, Pakistan. (Fred Zimmerman / S&S)

SHINKIARI, Pakistan &#8212; Living in a tent definitely doesn&#8217;t offer the creature comforts of home: no comfortable recliners or couches, no soft beds. But while Okinawa&#8217;s III Marine Expeditionary Force Marines and sailors may be roughing it during their deployment here, a small section of the unit is trying to make life as comfortable as possible for their fellow troops.

Marine combat engineers &#8212; along with a few fellow Marines and sailors &#8212; have been building decking, or wooden floors, every day for the camp&#8217;s tents. They temporarily halted production on Friday, however, after they ran out of 2-by-4s and nails for the flooring&#8217;s frames and struts, according to Cpl. Richard Book, a combat engineer from Okinawa&#8217;s 9th Engineer Support Battalion.

Fellow combat engineer Cpl. Doyle Hoffpauir said in addition to making the tents feel like a home a little more, the flooring helps with hygiene. He said the decking will help keep the dust down &#8212; the camp is located on a dry, dusty soccer field &#8212; and will allow the Marines and sailors to kick off their shoes and air their feet.

The engineers can also make furniture like small tables, chairs and desks, Hoffpauir said. Some of the most recent requests have been projects they&#8217;ve never taken on, like crutches and an oxygen tank holder for the hospital.

Noble said the extra items the engineers build like the tables and chairs allow deployed servicemembers to somewhat customize their living spaces, giving them an area they can call their own.

For their initial projects, the engineers brought three pallets of 2-by-4s and 10 pallets of plywood, Book said. So far decking is in all the medical tents, the operations center, post office and showers. Book said it will take about 700 more 2-by-4s and several hundred nails to complete the decking for all the living areas.