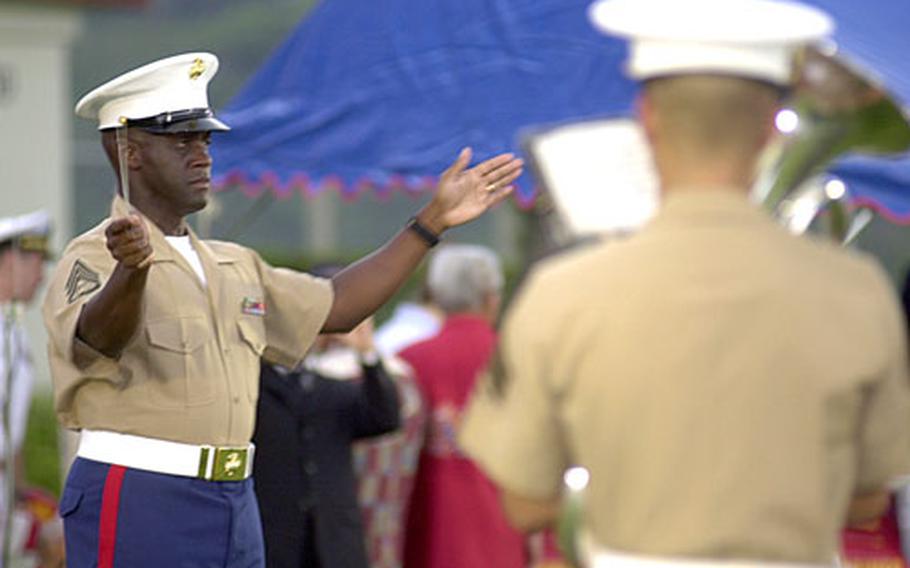 Cpl. Carlo A. Villavicencio and the rest of III Marine Expeditionary Force Band practice drill and music on Camp Foster on Nov. 2 in preparation for a performance at Marching Festival 2006 in Tokyo. (Cindy Fisher / S&S) CAMP FOSTER, Okinawa &#8212; You see a military band marching and performing on a field during a change-of-command ceremony for 20 minutes or playing at a ball for half an hour, and you think it&#8217;s got to be an easy job &#8212; all they do is toot their horns.

But musicians with the III Marine Expeditionary Force Band on Camp Foster say you couldn&#8217;t be more wrong: They do much more than just play music.

They go to boot camp. They take part in training exercises and complete annual training. And yes, they deploy.

Music permeates their Corps experience, but they are Marines first, band members said, and they work hard supporting and showcasing their branch of the service.

When deployed with the expeditionary force, the 52 members of the band stand guard, man the heavy weapons and, of course, play music, said Staff Sgt. Michael A. July, the band&#8217;s senior enlisted conductor.

Band on the run

The band provides musical support to all the Marine units on Okinawa and at Marine Corps Air Station Iwakuni, Japan. Events range from changes of command, birthday balls, ceremonies and local school visits to annual concerts in communities. That means a lot of travel, hours of drilling and countless rehearsals.

To do that, the band lives by a different set of seasons from everyone else.

They also complete the same daily regimen of physical training and martial arts instruction as other Marines.

Next comes the change-of-command season, from March to July, during which the band typically plays for 30 to 35 ceremonies.

&#8220;During change-of-command season, we could do three ceremonies in a day in different uniforms,&#8221; said Cpl. Michael Spina, a clarinetist.

There is more to a ceremony performance than what people see on the field, July said.

&#8220;A lot of work goes into preparing for change of commands &#8212; administratively and through hours and hours of rehearsals,&#8221; he said.

All band members know all eyes are on them &#8212; including those of generals and the general public &#8212; and they put in a lot of sweat to get every footstep and musical note just right, July said. In numerous sessions on the tarmac, they run through drill movements until members know each segment instinctively.

Additionally, band Marines are expected to be perfectionists with their uniforms, said Sgt. Jacob Johnson, the band&#8217;s drum major.

They practice skills they are expected to use when they deploy: operating weapons, handling rear area security and protecting the command operations center.

Then it&#8217;s time to prepare for October&#8217;s annual Friendship Through Music Concert performed with a Japanese Ground Self-Defense Force band.

&#8220;Concerts typically take two or three months for (regular) bands to prepare for, but we do it in a month,&#8221; Spina said. That means long hours and late nights, he said.

During preparation, they still make time for PT and the Corps martial arts program.

Next is November &#8212; Marine Corps birthday ball season, and, in the middle of the month, a marching festival in Tokyo that this year involved three performances a day.

He said the busy November season sometimes requires the band to split into two so it can support two balls a night when necessary.

The year ends with a Christmas concert in December &#8212; and, finally, some time off.

Cpl. Nina Goralski, a clarinetist who joined the band a few months ago, said one of the first things new members must do is memorize about 25 songs. And then there&#8217;s the spit and polish.

July said members also have a host of secondary duties, such as fire-team positions and section leaders. The band also handles its own administration, public affairs, security and other nonmusical tasks.

Multitasking is a necessary skill.

Despite the packed schedule, band members say there are plenty of perks.

He&#8217;s played Australia, Saipan and Iwo Jima, among other places, and for presidents and emperors, he said.

For Goralski, the payoff is &#8220;being around musicians who care about music and are expected to play at a professional level.&#8221;

Being in the band is easy, and hard, Steele said.

They&#39;re looking for a few good musiciansCAMP FOSTER, Okinawa &#8212; So you think becoming a Marine musician is a breeze?

Well, it&#8217;s not as easy as many may think, say some III Marine Expeditionary Force Band members.

&#8220;This is the only job in the Marine Corps where you have to be a professional before you can get in,&#8221; said Staff Sgt. Michael A. July, the band&#8217;s senior enlisted conductor.

Whether making a lateral move or enlisting for the first time, you have to audition and prove your skill on your instrument before you will be accepted into the band field, said Master Sgt. Sean Steele, III MEF&#8217;s bandmaster.

Once accepted, Marines attend the Armed Forces School of Music on Naval Amphibious Base Norfolk, Va., with Army and Navy musicians, he said. There, Marines learn a variety of subjects, including sight-singing, concert wind ensembles, stage bands, rock combos and improvisation, according to the school&#8217;s Web site.

A day in the life

A typical day in the life of a Marine musician during November&#8217;s ball season:

7 a.m.: Muster outside for music and drill rehearsal.

10 a.m.: Gather inside band hall to rehearse just the music.

10:30-midnight: Return to band hall and unload. Head home for some rest.