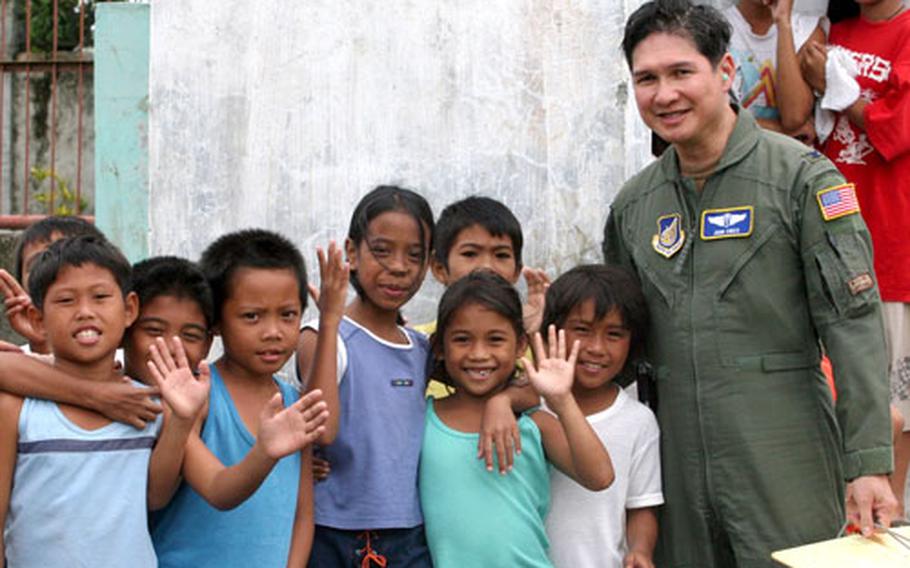 Air Force Col. John T. Cinco, a doctor, is greeted by several children in Saint Bernard in the Philippines on Feb. 23. Cinco, who was raised in the Philippines, is a member of a special international health unit Pacific Air Force maintains to assist in aid missions. (Philippe Chasse / U.S. Marine Corps)

U.S. Air Force Col. John Cinco hadn&#8217;t planned to be in the Philippines during this year&#8217;s Balikatan military exercise. Then mud buried a village on the southern island of Leyte three days before the training&#8217;s Feb. 20 start date.

The call came Feb. 18, a day after the landslide. By Feb. 23, Cinco was on Leyte with U.S. troops diverted from Balikatan.

A doctor, Cinco&#8217;s medical expertise was needed to assess rescue and recovery operations for injured survivors and evacuees.

But he also was summoned because the Baltimore native was raised in the Philippines. His language skills and familiarity with local culture were just as important to the U.S.-led relief effort as his medical skills, say military officials at Kenney Headquarters, which coordinated Pacific Air Forces&#8217; landslide relief.

Former Air Force Surgeon General Lt. Gen. Paul K. Carlton Jr. conceived IHS, now in its fifth year. His reasoning: Servicemembers could help more after disasters if they knew more about the country and its language.

The program, unique to the Air Force, &#8220;focuses on building medical partnerships with other countries in peacetime before they need assistance,&#8221; according to a fall 2002 Air and Space Power Journal report.

Cinco&#8217;s staff is eight strong at full strength. Each specializes in four or five countries based on Pacific Command priorities, he said. Two are Vietnamese-Americans, but being born or raised in a particular country isn&#8217;t a job requirement, Cinco said.

The Air Force has a worldwide database of 150 people with various language and cultural capabilities, he said. &#8220;If I wanted to find a Cambodian-speaking dentist, I would query that database.&#8221;

Information exchanges are set up in more industrialized nations, she said. IHS medics, for instance, are discussing disaster management with nurses in South Korea and training Japanese aerospace medical doctors to care for their own pilots.

In Leyte, Cinco focused on survivors and evacuees: 19 injured, about 410 displaced and an additional 2,500 evacuees from surrounding villages. More than 1,000 perished in the mud.

He assessed public health clinics and local hospitals, ensuring appropriate medical care was available and supplies such as food, water, clothing and bedding were adequate.

Cinco said many injuries were cuts or bruises from boulders, roofing and housing material shards caught up in the landslide. He helped coordinate an airlift to Manila for an 18-year-old girl whose left cheek had been so torn by a piece of tin roofing that her face was partially paralyzed, affecting her ability to speak, eat, smile and close her left eye.

Cinco said most Filipinos he encountered could speak some English, but he said he acted as a liaison among government agencies on the scene, the U.S. military and locals, &#8220;clarifying procedures, policies or the way we do things.&#8221;