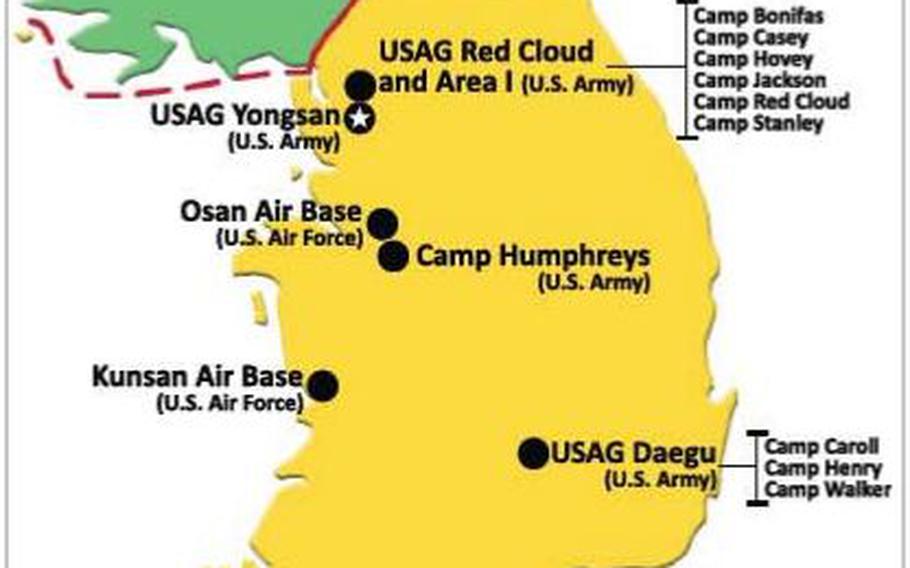 Most of the violations were related to inadequate upkeep of housing facilities, according to the Oct. 28 report, which found that “housing visits and inspections were not being conducted in accordance with established instructions and procedures.”

Twelve percent of the occupied buildings at 13 U.S. Forces Korea military installations — ranging from family housing to barracks and dormitories for unaccompanied servicemembers — were reviewed during the IG’s March 10 to April 24 inspections. The checks found 646 deficiencies in 277 units, mechanical rooms and common areas.

The 11 “critical” deficiencies included an out-of-service fire alarm system at U.S. Army Garrison Yongsan, which left the occupants of one building with no means of fire detection. Furnaces in two other buildings at the Seoul base were leaking heating oil onto an electric blower motor, posing a fire hazard.

At Camp Jackson, one building was not electrically grounded according to code, posing the possibility of electrocution. Four buildings at Camp Bonifas lacked carbon monoxide alarms.

Camp Humphreys had three fire or electrocution risks, including a building that was not grounded per code and an extension drop cord in another that was improperly wired. Energized copper wire was exposed in an elevator equipment room.

The 11 violations were deemed critical enough to require immediate attention; all have been corrected since the spring inspections or were expected to be completed last summer, according to correspondence from installation officials included in the IG report.

“The health and safety of our service members and their families in Korea is a top priority,” USFK said in an email. “As a result, the affected service components have taken and continue to take corrective action.”

Among the other findings:

At U.S. Army Garrison Yongsan, the inspection found a lack of follow-up reports on three housing units previously found to have high radon levels. At U.S. Army Garrison Humphreys, mold — a common problem during South Korea’s humid summers — was found in housing units due to inconsistent upkeep of air handling and ventilation systems, and no data on levels of radon, a gas linked to lung cancer, was available. Osan Air Base had not addressed elevated radon levels at some buildings, and along with Camps Walker and Henry, did not have mandated radon reduction programs in place. Osan had only one Airman Dormitory Leader per 340 rooms; the Air Force’s maximum ratio is one ADL per 145 rooms. At Kunsan Air Base, each ADL was responsible for an average of more than 200 rooms. Overall, the report said installation personnel who deal with housing recognize the need for improvements but noted “challenges such as the lack of training, and short deployments, which increased turnover and reduced continuity in housing services. Contributing factors included a lack of translation (English to Korean) of standards, codes, procedures, and instructions, and their implementation.”

The IG reiterated a call it made earlier this month in a report on military housing in Japan for the creation of a uniform policy on mold and radon control and remediation.

“Based on our inspection, the significant presence of mold and DoD’s current ad hoc approach to radon mitigation places unnecessary risk on the warfighter and their dependents,” said an Oct. 28 memo to top military officials, included in the report. “The OIG DOD firmly believes that serious health hazards such as these need to be addressed at the DoD level.”

The Under Secretary of Defense for Acquisition, Technology and Logistics disagreed with the recommendation, saying there was no U.S. federal standard for mold and radon.