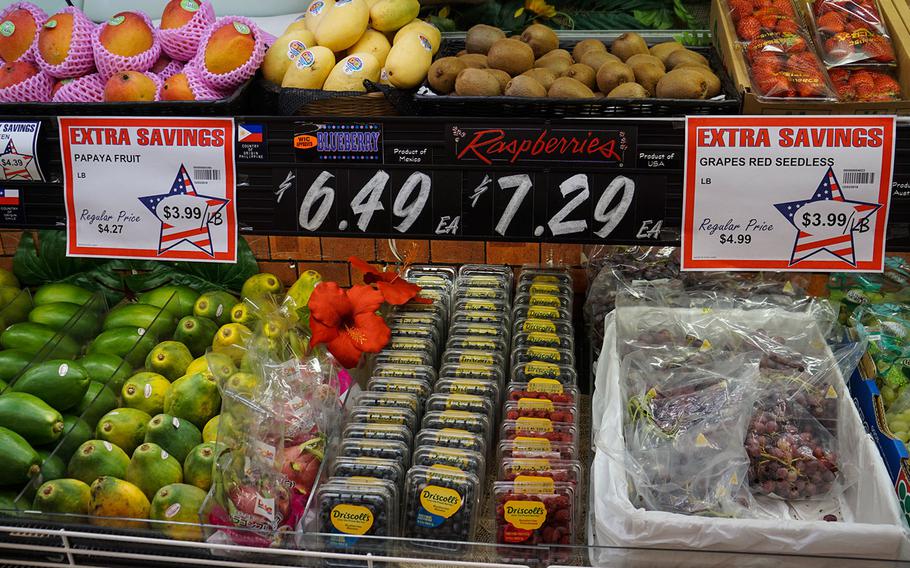 Buy Photo
Six-ounce boxes of blueberries and raspberries were selling for $6.49 and $7.29 at the commissary on Yokota Air Base, Japan, Thursday, March 15, 2018. (Leon Cook/Stars and Stripes)

Buy Photo
Six-ounce boxes of blueberries and raspberries were selling for $6.49 and $7.29 at the commissary on Yokota Air Base, Japan, Thursday, March 15, 2018. (Leon Cook/Stars and Stripes) 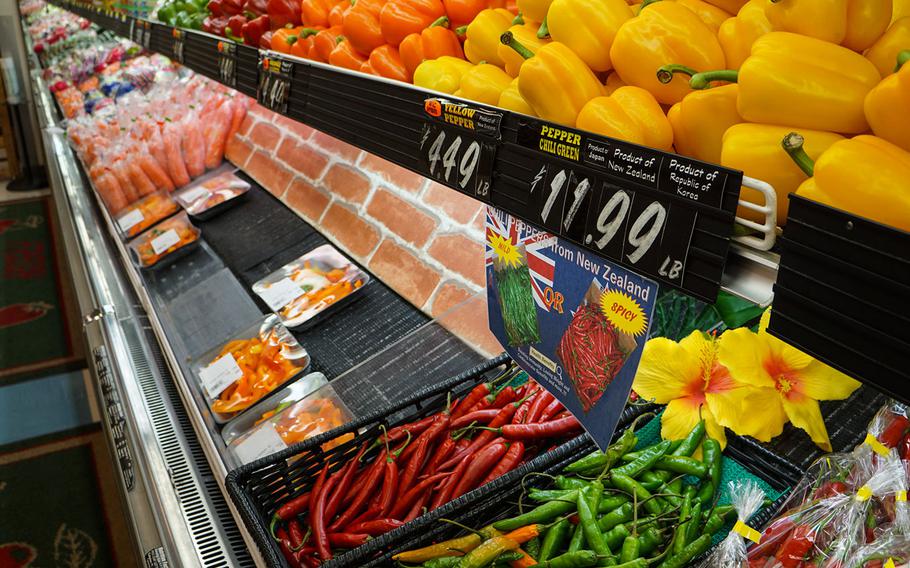 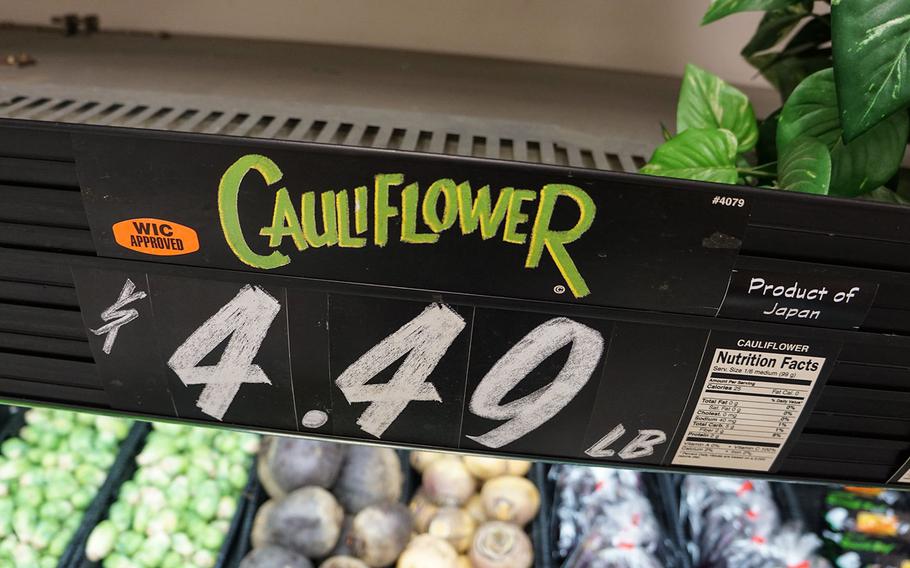 Buy Photo
A head of Japanese cauliflower sold for $4.49 per pound at the commissary on Yokota Air Base, Japan, Thursday, March 15, 2018. (Leon Cook/Stars and Stripes)

YOKOSUKA NAVAL BASE, Japan — The Defense Commissary Agency has saved tens of millions of dollars shipping produce to the Pacific since 2015. However, a recent inspector general report says the agency failed to provide effective oversight of its new contracts, leaving customers paying significantly more for fresh fruits and vegetables.

In the past, DeCA subsidized contractors’ produce shipments to commissaries in Japan and South Korea, costing the agency about $114.6 million from 2013 to 2015, the IG report said. When contracts were renegotiated in 2015, DeCA stopped paying for shipping, instead aiming to purchase more locally grown produce and having suppliers foot those costs.

Since then, DeCA has saved about $38 million per year.

After the deal was made, prices for fresh produce climbed at Pacific commissaries, according to the report. Between November 2015 and April 2017, customers in mainland Japan paid 20.9 percent more for produce. Over the same period, Okinawa customers saw an increase of 23.6 percent while those in South Korea paid 31.5 percent more.

The report’s findings were based on a review of prices for 239 unique fresh produce items in mainland Japan, 237 on Okinawa and 231 in South Korea.

The 2015 contract’s aim was to keep the quality and cost of produce on base comparable to what they were before the contract, but the IG report says those expectations were not met. It blamed DeCA for the price hike, saying the agency’s “market research did not adequately evaluate the feasibility of obtaining fresh produce items from in-country for DeCA commissaries in the Pacific theater.”

DeCA spokesman Kevin Robinson likened the price increases to berries in the United States, where they are cheaper in summer and more expensive in winter when they must be sourced from other countries.

“While transferring the responsibility for shipping to the contractor may have contributed to price increases, the price of produce fluctuates depending on market factors such as the availability and the growing season in all parts of the world,” he said.

The Pacific model is based off one used to “successfully” supply produce to Europe commissaries since 2007, Robinson said.

“These contracts hold the contractors responsible for the product’s freshness and quality until it is received and accepted by our commissaries,” he said.

The IG report also mentioned that Cost of Living Allowances were minimally affected by the higher prices because produce accounts for only about 2 percent of purchases reported in surveys analyzed to set COLA amounts.

To avoid high produce prices at the commissary, some customers in the Pacific say they are going off base more often for fresh fruits and vegetables.

Yokosuka resident Kimberly Carpenter is living in Japan for her second time. She said that the commissary’s prices were noticeably cheaper before 2015.

“We lived here in 2011 through 2014 and [are] back again, and I’m not sure what the commissary is thinking in regard to pricing. Who in their right mind is going to pay $4 for a single bell pepper?” Carpenter said. “Why the military thinks the commissary is supporting our troops with these prices is beyond me.”

But going off base for cheaper produce isn’t always feasible, said Aimee Palmer, also of Yokosuka.

”We have been here since January 2014, [and] my kids do not eat nearly as much fresh produce as I would like,” she said. “I just don’t make enough time in my week to go out in town and buy all the apples, bananas, grapes, oranges or strawberries my kids love to eat.”

Robinson said that “while all produce on post may not be lower than the produce off post, we have verified that we are providing significant savings on the core items” such as apples, bananas, grapes, grapefruit, potatoes, tomatoes and carrots.

“We are not as competitive with ‘farmers market’ pricing where quantities and assortments are sporadic, and the off-post establishments are not subject to the same health inspections as the DeCA sources,” he said.

Still, many customers are appreciative of the commissary regardless of the produce prices because of its convenience and accessibility to American foods.

“The commissary isn’t perfect, but I sure wouldn’t want to see it go away,” said Tanya King, a civilian worker at Yokosuka. “We have regular taco nights so getting sour cream, cheese, taco sauce, etc. – I don’t know if I could live without some of the American ingredients that I couldn’t get shipped via Amazon.”