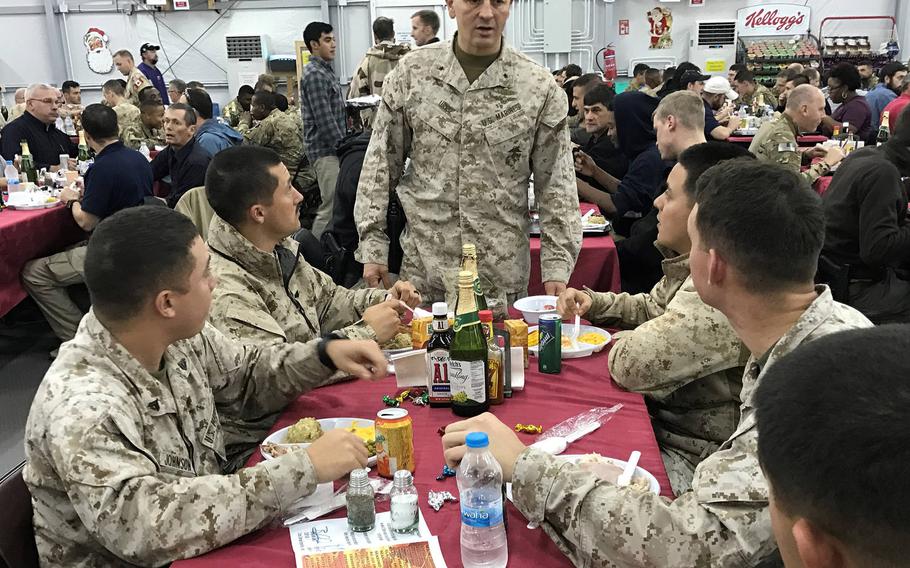 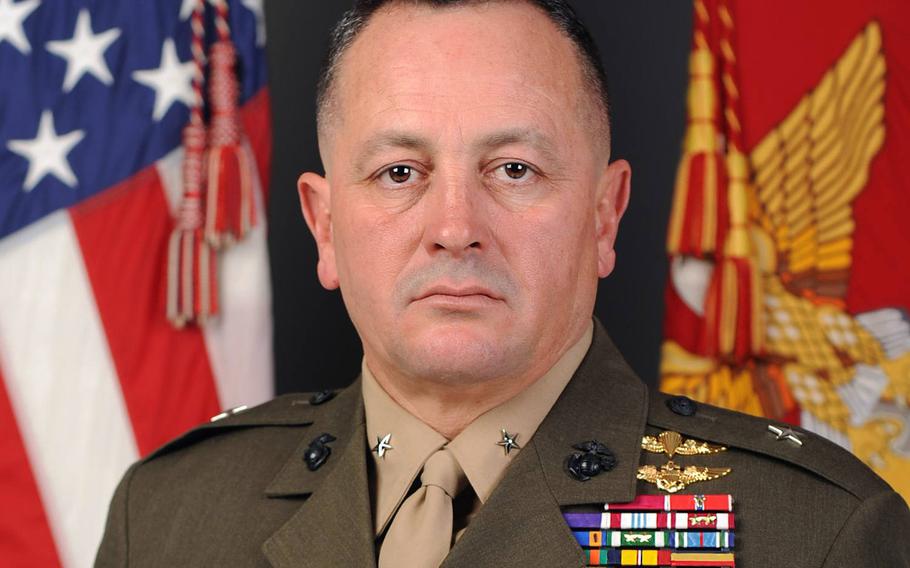 Marine Brig. Gen. Rick A. Uribe. Uribe violated ethics rules while serving in Iraq when he asked or allowed his aide to run a number of personal errands for him on official time and accepted gifts from subordinates who were paid less than he was, a Pentagon watchdog has found. (U.S. Marine Corps)

A Marine general violated ethics rules on a recent deployment to Iraq when he asked or allowed his aide to loan him money and run his personal errands, the Pentagon’s inspector general said Thursday.

Marine Brig. Gen. Rick A. Uribe — who had served previously as the inspector general of the Marine Corps — often had his aide pick up his laundry, deliver his meals, write his unofficial correspondence and stand by gym equipment he wanted to use to make sure no one else could use it, the Pentagon IG said in a report.

Uribe also let his aide pay for his haircuts, borrowed cash and used Wi-Fi access she paid for without reimbursing her, the report found.

From May 2016 to June 2017, Uribe was the senior ranking Marine in Iraq as part of the anti-ISIS coalition. He was deputy commanding general for operations in Baghdad and director of the Combined Joint Operations Center. His responsibilities included ordering airstrikes to destroy enemy car bombs, mortars and other heavy weapons.

He told investigators he was often working 18-hour days to support the Iraqi security forces maneuvering to retake cities such as Fallujah and Mosul from ISIS.

Before deploying to Iraq, the general served as IG, where he had responsibility for investigating ethical violations involving the misuse of subordinates.

One witness told investigators “he would have known better” than to request or allow his aide to perform duties for him on official time that had no connection to official duties.

Uribe had also attended ethics training in recent years that witnesses said included instruction on misuse of position, appropriate use of an aide-de-camp and guidance on not accepting gifts from subordinates.

But days after he returned to the U.S. from Iraq in June 2017, a Defense Department hotline complaint alleged that during the course of the one-year deployment, his aide’s “entire existence as aide-de-camp centered on personal servitude.”

In his own defense, Uribe said he was a “frocked” brigadier general, meaning he was a colonel who was selected for promotion and wore the rank of a general, and had never had an aide or any instruction or guidance beyond a few general slides about the use of aides. He said he trusted his aide to tell him if he was asking her to do something improper.

The aide, who is unnamed in the report, told investigators she had told him, “I’m doing a lot more stuff like your personal type of items. Like, that’s not my job as an aide.”

To which she said Uribe replied only, “Understood.”

Some of those personal services included stripping the sheets from the general’s bed and turning them in to be cleaned, as well as spending hours arranging to have his prescription toothpaste shipped to Iraq. The aide also alleged that he hoarded about $150 in chocolates and coffee sent to him by a lieutenant colonel.

The investigation found Uribe told the officer in an email he would share the goodies.

The report recommends that Uribe’s supervisor “take appropriate action” and that Uribe reimburse the lieutenant colonel $150 for the coffee and chocolates.

Witnesses said they saw the aide picking up the general’s laundry on several occasions, perhaps even weekly. A Marine Corps ethics expert told the inspector general asking an aide to do so would be wrong.

“The problem is the Secretary of Defense, a retired marine general officer, he’s known right now for going to go get his own laundry (in the Pentagon), period,” the unnamed expert said, according to the report.

There are no Marine Corps standards for use of aides, the IG found, but there is guidance stating that while aides can perform duties that make the work of a general easier, they should not “generally” be employed to perform personal services. The IG recommended that the Pentagon develop a formal policy for the management and use of officer aides.

Uribe told the IG that his aide’s errand-running “significantly assisted me in doing my primary jobs of … concentrating on killing and the annihilation of ISIS … from Iraq.”

In the absence of the service-specific guidance, the IG applied the Joint Ethics Regulation, which bars officials from requesting or coercing subordinates to perform duties outside their official responsibilities and says that military aides cannot be used to support the unofficial activities of another Defense Department employee.

“Although I believe that some of the substantiated allegations are not justified, I realize that I improperly employed my aide and that I improperly accepted small convenience loans from my aide,” Uribe said in an official response included in the IG report. “Where I would never think to engage in these activities in garrison, in the fog of the combat zone, it seemed acceptable somehow.”

Uribe’s predecessor in Iraq, Maj. Gen. William F. Mullen III, never allowed his aide to pick up his laundry, carry things for him, deliver meals or perform other such personal services, the report found.

When asked if an aide should perform such duties, Mullen’s aide said no.

“Am I a leader of Marines or am I a valet?” the aide said, according to the report.

Uribe, who became deputy commanding general of I Marine Expeditionary Force, Marine Corps Base Camp Pendleton, Calif., said he believed he was busier than Mullen, but he said that was not a defense of his actions.

“At the end of the day as a senior leader, the only thing I am entitled to is to be held accountable for my actions,” he said.