If you’re in Europe, April 15 is just another day 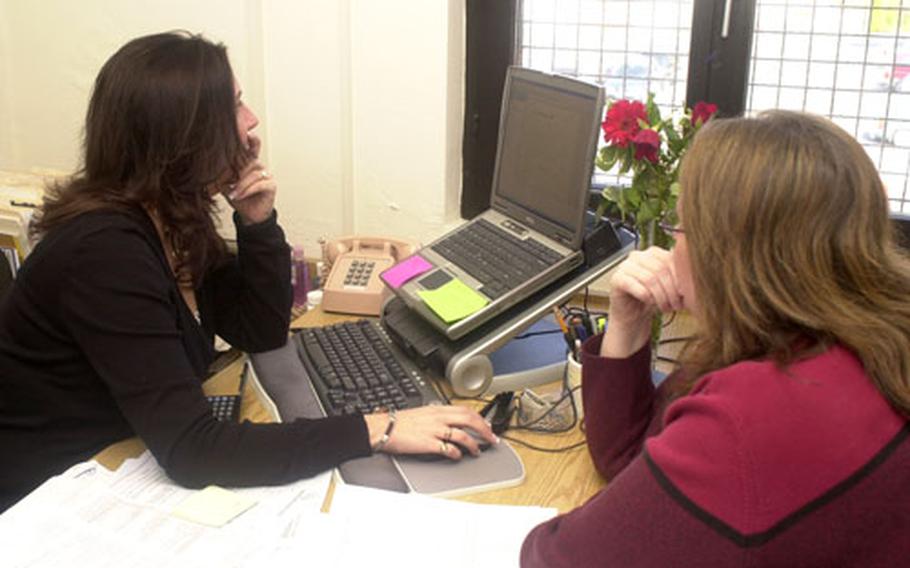 Carla Wiggins, tax coordinator for Würzburg and the 1st Infantry Division, scans her computer screen as she helps a family member complete her taxes. Nearly 90 percent of the people who go to the 1st ID tax assistance centers are entitled to a refund. (U.S. Army)

Across America, citizens are making the annual last-minute rush to get their taxes filed before the looming deadline.

But military personnel and American citizens living overseas don&#8217;t need to stress out just yet. Those expats get until June 15 to make right with Uncle Sam.

However, paying taxes by the deadline is recommended for those who owe, Halsey said. Interest starts accruing on owed balances after April 17 this year &#8212; two days later than the traditional deadline since April 15 falls on a Saturday.

If a soldier was downrange in 2005, he or she would get a 180-day filing extension after leaving the war zone, Halsey said. On top of that, any enlisted soldier also gets another extension equal to the time spent downrange. So if a private was in Iraq for eight months, he or she would also get an eight-month extension.

Furthermore, Halsey said, all enlisted soldiers&#8217; pay and some officers&#8217; pay are not taxed while in the combat zone. There are numerous other tax breaks for military personnel.

Since January, tax assistance centers have been open throughout the European Command to help file taxes and decipher arcane tax codes and language.

While Defense Department employees of all stripes who are abroad have until this summer to get their tax filings in, Halsey cautioned that soldiers who might be reassigned back to the States should handle their tax business while still in Europe.

From the looks of it, soldiers have been getting the most out of the 1st ID tax assistance centers.

More than $19 million in refund dollars have flowed to 1st ID personnel through the assistance centers, according to a division release sent out this week.

Things are expected to slow down by the end of April, but an expected $30 million should be refunded to soldiers by June.

The average time for filing at the tax centers is about 20 minutes. Appointments or walk-ins are welcome. People need to bring their identification cards, W-2 forms, 1099s and any other relevant documentation. A refund is usually received within a few weeks.