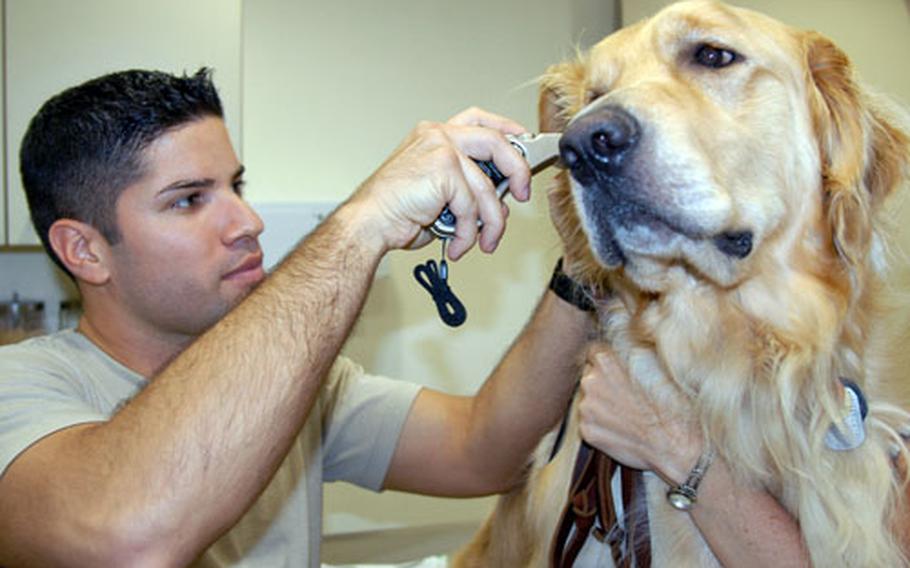 MISAWA AIR BASE, Japan &#8212; Misawa is a great place for pets, especially for big, furry dogs. The climate is cool most of the year and they can romp in the base dog park.

If the Patriot Express pulls out of Misawa this fall, it likely will be more expensive and a lot more challenging to ship a pet home or to one&#8217;s next duty station, especially for larger animals, base officials say.

For a permanent-change-of-station move, the Patriot Express currently is the most convenient and inexpensive option for shipping pets to and from Misawa.

Travelers must request a pet space, since there are only three flights a month out of Misawa, military officials said, and pets cannot exceed 150 pounds. The cost, based on weight, ranges from $92 to $276. But the flight takes passengers and their pets directly from Misawa to Seattle.

U.S. carriers flying from Tokyo&#8217;s Narita International Airport generally charge rates similar to those of Patriot Express to transport pets, but Delta and United airlines are the only carriers that offer government-employee, overseas pet movement in the summer, military officials said, and they may refuse to ship a pet depending on the temperature at the origin or destination.

But the real headache &#8212; and cost &#8212; for Misawa residents if Patriot Express service is ended would be the leg from northern Japan to Narita.

Japan Airlines runs three flights a day from Misawa to Haneda Airport in Tokyo. For animals and their cage weighing less than 99.21 pounds, the cost is 4,000 yen, or about $34. But with Haneda being many miles from Narita, the journey doesn&#8217;t end there.

One option: Servicemembers can reserve a spot for themselves and their pet on a Haneda-to-Narita shuttle run by Yokota Air Base&#8217;s 374th Services Squadron for $200. The &#8220;Black Cat&#8221; shipping service also will haul pets to Narita for about $413 to $496, depending on pet size.

The military does not reimburse costs of transporting a pet for a PCS move.

Lewis said they&#8217;re spreading the word to pet owners: &#8220;We&#8217;re putting it into welcome packets here so incoming personnel know in advance what to expect with the pet situation.&#8221;

Other base agencies at Misawa also are exploring alternative transportation options.

&#8220;What we&#8217;re looking at is some other kind of vehicle to transport the pets&#8221; from Misawa to Narita, said Maj. Timothy Sites, 35th Services Squadron commander. Pets aren&#8217;t allowed in Services&#8217; rental vans or the organization&#8217;s airport shuttle bus from Misawa to Narita because of allergy and safety concerns, he said.

Hana Kusumoto and Vince Little contributed to this story.