If infected with Ebola, troops would fly out of Africa on special charter A member of 94th Operations Group directs a Phoenix Air Gulfstream 3 air ambulance transporting a patient who contracted the Ebola virus as it taxis at Dobbins Air Reserve Base, Ga., on Aug. 5, 2014. (Brad Fallin/U.S. Air Force)

A member of 94th Operations Group directs a Phoenix Air Gulfstream 3 air ambulance transporting a patient who contracted the Ebola virus as it taxis at Dobbins Air Reserve Base, Ga., on Aug. 5, 2014. (Brad Fallin/U.S. Air Force) 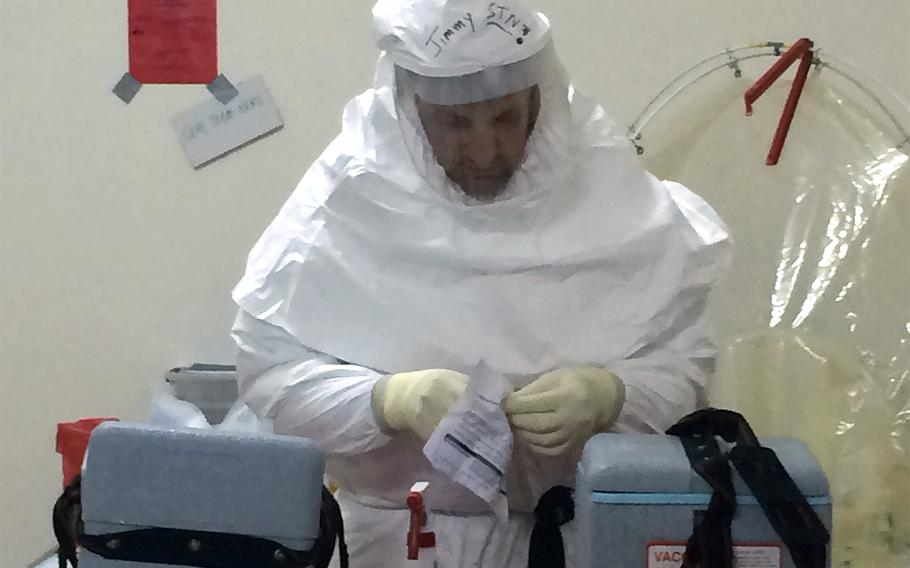 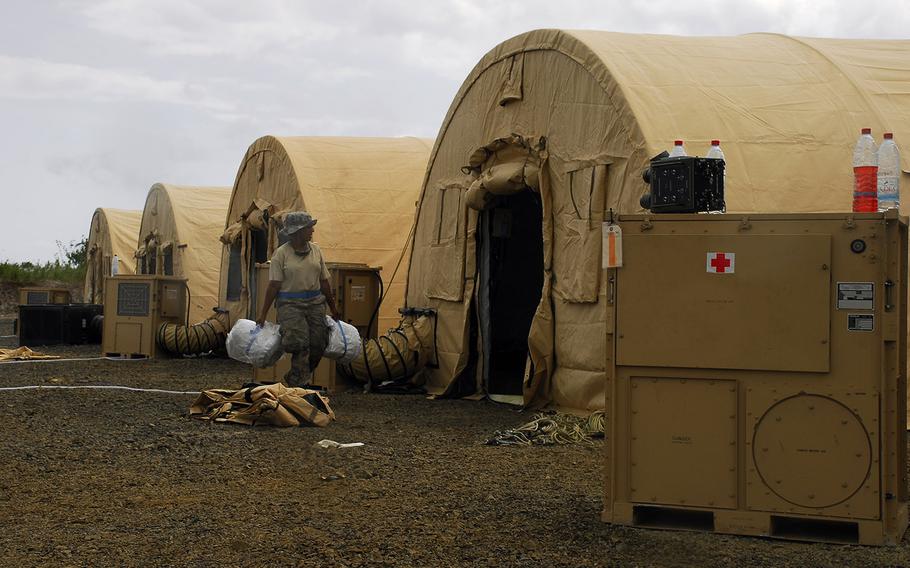 U.S. personnel begin construction on the Monrovia Medical Unit site in Monrovia, Liberia, on Oct. 7, 2014. The MMU is being constructed in the event that any of the medical workers in the area catch Ebola while assisting in Operation United Assistance. (Craig Philbrick/U.S. Army) Soldiers from the Aberdeen Proving Ground, Md.-based 1st Area Medical Laboratory will set up laboratories to support Operation United Assistance, the U.S. response to the Ebola outbreak in West Africa. If any U.S. troops were to fall ill during the mission in Liberia, the military has contracted with a Georgia-based air charter company for evacuation to the States. (U.S. Army)

VICENZA, Italy — Any servicemember falling ill with the Ebola virus during deployment to Liberia will likely be evacuated the same way at least nine Ebola patients have already been transported to the U.S. and Europe: on one of two jets specially equipped to provide medical treatment and prevent transmission of the contagious, deadly disease.

The jets belong to a small, Georgia-based air charter company called Phoenix Air. Officials say it is the only carrier capable of performing the evacuations.

“We’re it,” Dent Thompson, Phoenix Air vice president, said in a phone interview. “We’ve done (six) evacuations back to the U.S. and three to Europe, two into Germany and one into France,” Thompson told Stars and Stripes said before the company had evacuated a Norwegian last week. “It’s a steady program, we figure, for at least a year,” he said.

More than 3,000 U.S. servicemembers set to be deployed to Liberia have been tasked with providing logistical support in the country founded by freed U.S. slaves. The effort includes building 17 hospitals with 100 beds each, building a hospital for infected health care workers and training hundreds more providers each week.

To date, military officials have not disclosed treatment and evacuation plans for U.S. troops deploying to Liberia who might get injured or fall ill with malaria or a variety of other tropical diseases West Africa harbors.

Phoenix is under a six-month, $5 million, sole-source contract with the U.S. State Department to evacuate American citizens from West Africa, the Washington Times reported, and Thompson said he expected the contract would be extended until evacuations were no longer necessary.

“The State Department will allow any U.S. agencies to use us,” said Thompson, whose company has previously contracted with the U.S. Africa Command to fly general officers around Africa and has long provided more routine medical evacuations there.

“DOD would call State (if a troop needed to be evacuated), and they’d call us.”

The French, German and Norwegian citizens were evacuated on the company’s Gulfstream IIIs on condition that the U.S. was reimbursed for the full cost of the flight — about $200,000, Thompson said.

The jets are equipped with a variety of special medical equipment, air filtration and negative-pressure systems, a plastic patient tent and a decontamination room.

The system — an “air transport bio-containment unit” — was designed in cooperation with the Defense Department and the Centers for Disease Control and Prevention years ago, when authorities, concerned about avian flu and SARS (severe acute respiratory syndrome), prepared for safely evacuating CDC doctors working in Asia.

But no doctors got sick. The system went on the shelf — until this summer when American and European health care workers contracted Ebola in West Africa and authorities found there was no way to bring them home.

When Dr. Ken Brantly, the first American infected became ill, Phoenix Air was the only option, his employer, the evangelical Christian aid group, Samaritan’s Purse, learned. There was a South African company willing to evacuate Brantly, an aid group executive told the University of Minnesota’s Center for Infectious Disease Research and Policy. But the South African carrier would transport Brantly only as far Europe — on a Boeing 737 with a lower protection level than Phoenix Air’s jets — for $1.4 million.

International SOS, an insurance company that has contracted with TRICARE to provide medical services to troops overseas and has arranged previous medical evacuations from Africa, has said that it probably could not evacuate Ebola patients. International SOS in 2009 transported a Navy Seabee who contracted malaria in Liberia and died several days later at Landstuhl Regional Medical Facility.

Flying Ebola patients out of Africa for treatment "is highly complex and may not be achievable," says a statement on the ISOS website. “International evacuation should not be considered as feasible for patients with active clinical symptoms of Ebola.”

“The system we use took two years to develop,” Thompson said. “It’s custom-made for a Gulf Stream. You couldn’t put it on a C-17.”

Each plane can transport only one patient. The company was working on equipping a third plane that could evacuate two patients, Thompson said.

All Ebola patients evacuated by Phoenix Air who have been taken to specially equipped hospitals with teams trained to care for patients with diseases like Ebola have survived.

A Liberian man who traveled to Dallas, Texas, on a commercial flight while asymptomatic died of the disease last week at a Dallas hospital.

Spain evacuated two priests from Sierra Leone on an Airbus A310, according to reports. Both died at a Madrid hospital. A nurse who cared for one of them last week became the first person in Western Europe to be infected, raising concerns for hospitals in the West, which had been considered capable of containing the spread of the disease.

British authorities also evacuated one of their citizens, a nurse, on a Royal Air Force C-17. The nurse, who apparently did not have symptoms of the disease while in transit and so was not considered contagious, survived.

Defense Department officials have stressed that because troops would not be providing care to Ebola patients, they would be at very low risk of getting the disease.

Experts say that the virus is spread through direct contact — via broken skin or mucous membranes — with body fluids of symptomatic, sick patients or things contaminated by them The virus can live on surfaces for hours or days, experts say.

Health care workers and family caregivers have been hard hit by the disease for which there is no proven treatment. Experimental drug treatments and transfusions with the blood of Ebola survivors have been used on several patients, but their efficacy is unknown. Supportive care and early treatment are considered to improve survivability, experts say.

A spokeswoman for U.S. Air Forces in Europe and Air Forces Africa said that USAFE-AFAFRICA aircraft are being used in Liberia only to transport cargo and personnel into theater.

“Any additional questions you have on the future of Ebola support efforts should be directed to OSD public affairs,” she said.

Phoenix’s Thompson said the Air Force’s Air Mobility Command had contacted his company recently and had asked questions about Ebola transports, such as how to decontaminate a plane. But he said that if the military were working on its own system, it wouldn’t be in the pipeline for four to six months at best.

“If the Air Force did develop a system, we’d be happy,” Thompson said. “There’s actually more work than capacity.”