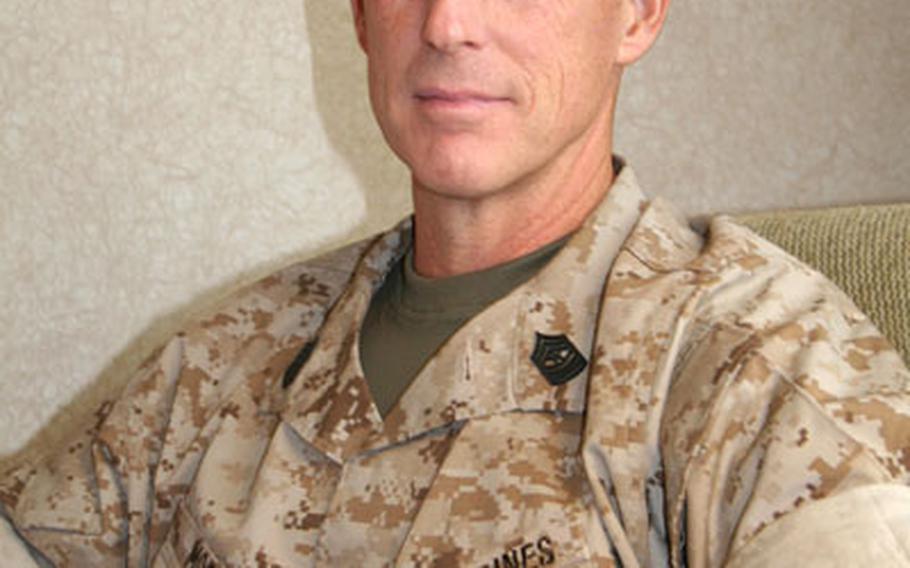 Marine Sgt. Mag. Jeffrey Morin, senior enlisted leader for the more than 230,000 U.S. and coalition personnel in the U.S. Central Command&#39;s area of responsibility, talked about his trips to the region, including Iraq and Afghanistan, and his conversations with troops there. (Lisa Burgess / S&S)

ARLINGTON, Va. &#8212; The improvised explosive device, or IED, &#8220;is a weapon that has no military effect, but controls everything on the battlefield,&#8221; said Marine Sgt. Maj. Jeffrey Morin, senior enlisted leader for the U.S. Central Command.

Morin spoke to Stars and Stripes on Wednesday, while in the Washington area to attend a conference for the military&#8217;s sergeants major.

As senior enlisted leader for the more than 230,000 U.S. and coalition enlisted personnel in the 27 countries that make up the U.S. Central Command&#8217;s area of responsibility, Morin said that improvised bombs are the most significant thing that &#8220;keeps me up at night.&#8221;

The &#8220;best and brightest people&#8221; are working to come up with ways to take away insurgents&#8217; advantage with the munitions, and millions of dollars are being spent to address the issue, Morin said.

Despite those continuing efforts, Morin said, he remains unhappy with &#8220;the speed at which [the enemy] is able to change tactics, techniques, and procedures&#8221; when it comes to the Americans&#8217; fight to counter the explosives.

Roadside bombs continue to cause the majority of fatalities among U.S. personnel in Iraq, making the devices the the No. 1 concern troops raise when they talk with Morin on his trips to Iraq and Afghanistan, he said.

Deployed troops closely follow the Pentagon&#8217;s push to rush thousands of the new Mine Resistant Ambush Protected, or MRAP, vehicles to the field, Morin said.

Marine military police and other units already equipped with MRAPs in places such as Anbar province laud their performance, particularly the special &#8220;V&#8221; shaped hull that is designed to safely channel to force of buried roadside bombs away from passenger compartments.

Troops in Iraq, whom Morin speaks to, are eagerly anticipating the arrival of MRAPs, the command sergeant major said.

The vehicles &#8220;will increase a lot of confidence in folks out there&#8221; who are working outside the wire, Morin said.

Protecting U.S. forces against improvised explosives is just part of the issue, however, Morin said.

He noted a recent trend toward truck and bus bombs that are packed with thousands of pounds of munitions that have been killing dozens of civilian Iraqis almost daily.

Civilians Iraqis see the carnage caused by the explosions, and although they understand coalition forces weren&#8217;t directly responsible, human nature demands that &#8220;they have to blame someone,&#8221; Morin said.

Blame is most easily laid on U.S. forces, with their obvious tanks, uniforms and arms, he said.