IEDs, trucks, and a dilemma in the Afghanistan night 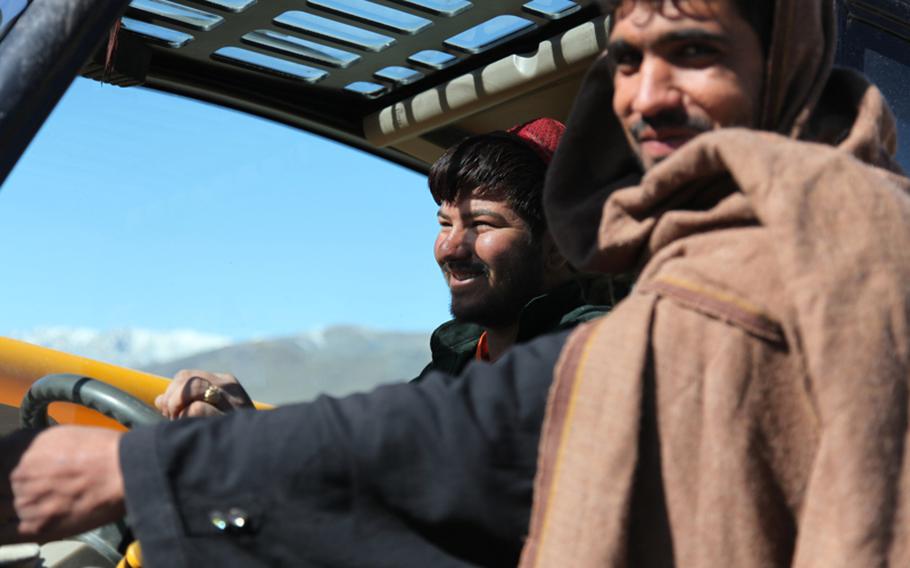 An Afghan worker and his helper use a forklift to download materials from a truck at Combat Outpost Garda, Afghanistan, in 2009. Getting materials to COP Garda via the highway can be a dangerous business. Trucks can become targets during road-clearing operations. (Teddy Wade/Courtesy of U.S. Army)

An Afghan worker and his helper use a forklift to download materials from a truck at Combat Outpost Garda, Afghanistan, in 2009. Getting materials to COP Garda via the highway can be a dangerous business. Trucks can become targets during road-clearing operations. (Teddy Wade/Courtesy of U.S. Army) A convoy of trucks driven by Afghans wait on Highway 1 for the U.S. military to clear the dangerous stretch of road ahead of any possible improvised explosive devices and enemy fighters in Sayed-Abad district, Wardak province, Afghanistan, in 2010. Often, there are no good options to be decided on as the trucks themselves become potential targets while waiting. (U.S. Army)

JALREZ VALLEY, Afghanistan &mdash; A line of 20 trucks sat grumbling in the darkness, loaded down with dismantled pieces of an American combat outpost and stopped in their tracks by a roadside bomb. It was after 2 a.m.

The trucks had been waiting for hours as bomb techs traveled to the site, not far from a police checkpoint that had been attacked a short while earlier.

They were easy targets. Harder to resist the longer they sat still.

None of the options seemed good. When the explosive ordnance disposal team arrived it looked into a culvert running beneath the road and found two jugs and a propane tank &mdash; 75 to 100 pounds of homemade explosive, plus whatever was in the tank. The bomb techs wanted to blow it in place.

The resulting crater would most likely wreck northern Wardak province&rsquo;s second most important road, possibly disrupting traffic for weeks, and stranding the trucks with their cargo.

It seemed that EOD, with the best intentions, was about to sow the Taliban&rsquo;s chaos for them. What other options were there?

The story unfolded in radio transmissions between an American sergeant from the 3/89 Cavalry, 4th Brigade, 10th Mountain Division on the scene and his commanders at nearby Combat Outpost Garda as they tried to solve the late-night puzzle, balance risk against reward.

I heard it all as I lay on the dirt above the highway with a scout platoon while they lay in ambush for Taliban fighters. The Taliban were late, so we huddled under wubbies (poncho liners) and shivered in the wind and listened to the back and forth like it was a radio serial from the 1930s.

Would EOD blow up the road? Would the truckers, instead, drive over the bomb? Would the Taliban attack the trucks as the vehicles sat still in the dark?

The trucks carried equipment and structures from COP Jalrez, the 10th Mountain Division&rsquo;s westernmost base in Wardak. It was being shut down in preparation for the eventual transfer of the area to Afghan control. The freight was headed east, to COP Garda, about seven miles down the road.

The trucks had started down Highway 2 before midnight, but it wasn&rsquo;t long before one of the trucks jackknifed, blocking the road. As a crew tried to recover the truck, an Afghan National Police patrol found the IED. They made a risky choice and cut the command wire, but the explosives remained in the culvert, along with the possibility of secondary booby traps.

When EOD members finally arrived &mdash; they had been forced to slowly clear the road as they went, searching for other bombs &mdash; the convoy had been stopped for more than four hours.

EOD inspected the bomb and tried to drag it out using a robot. No luck. So they decided to blow it in place.

&ldquo;EOD estimates the crater will be about 30 feet,&rdquo; Sgt. 1st Class Brian Adams said over the radio.

The trucks would have to make a U-turn and head back to COP Jalrez, a hard thing for tractor trailers to do on a narrow road, even in daylight. Then there was the weight: The trucks were so heavy, Adams warned, that they probably wouldn&rsquo;t be able to make it back up the steep approach to the COP.

&ldquo;I can&rsquo;t have them blowing up my road,&rdquo; he said through static. He told EOD to find another solution.

&ldquo;The only way EOD can get in there is if they take off their kit and crawl in there,&rdquo; Adams replied.

You could almost hear the techs&rsquo; reluctance. Who would want to crawl into a culvert late at night and snuggle up to a bomb? Possibly EOD techs were more reluctant than usual because they&rsquo;d recently found &mdash; and been hit by &mdash; victim-operated bombs along the same road.

While Lopez and Sikes considered their choices, the soldiers voiced their own opinions.

&ldquo;If someone told me to drive over an IED I&rsquo;d tell them to &hellip;&rdquo; one soldier said.

&ldquo;Nah, send them,&rdquo; another said. &ldquo;What are they gonna do? You can&rsquo;t turn a tractor trailer around there.&rdquo;

Ultimately Lopez and Sikes took the gamble, betting that, without its command wire, the homemade explosives wouldn&rsquo;t detonate.

EOD wondered if the choice was within regulations. Sikes assured them it was.

Around 4 a.m., the trucks were rolling again. The Afghan drivers, not exactly known for cautious driving, were unfazed. EOD eventually removed the IED with a special charge designed to clear culverts.

Later in the morning, Sikes explained the logic of the decision.

&ldquo;A little risk, a big reward,&rdquo; he said. &ldquo;If we&rsquo;d have blown up that road, it would have thrown off everything &mdash; traffic, the base closure, it would have forced the guys out there to stay at a less well-defended COP.&rdquo;