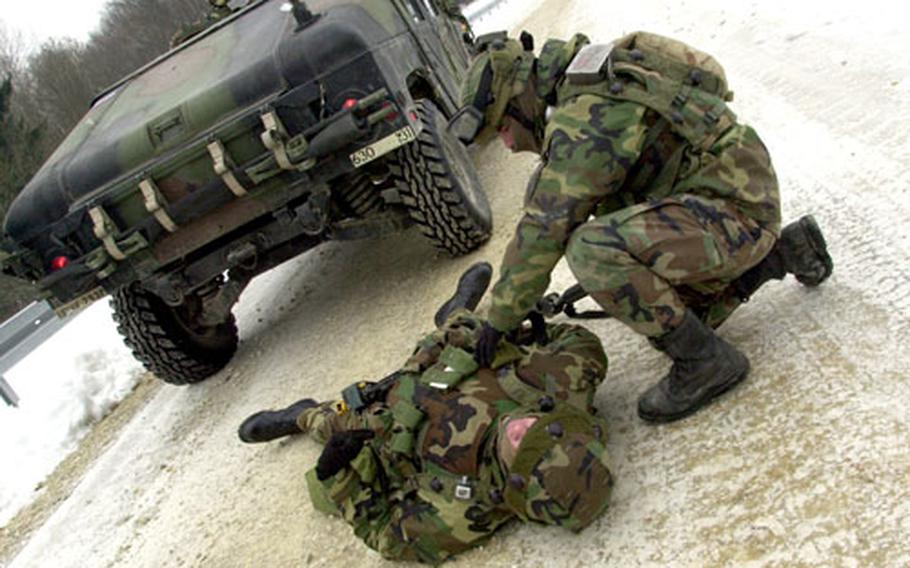 A 95th Military Police Battalion soldier renders aid to a comrade pretending to be wounded by a mock roadside bomb during a training session at the Joint Multinational Readiness Center at Hohenfels, Germany, on Wednesday. (Seth Robson / S&S)

A 95th Military Police Battalion soldier renders aid to a comrade pretending to be wounded by a mock roadside bomb during a training session at the Joint Multinational Readiness Center at Hohenfels, Germany, on Wednesday. (Seth Robson / S&S) 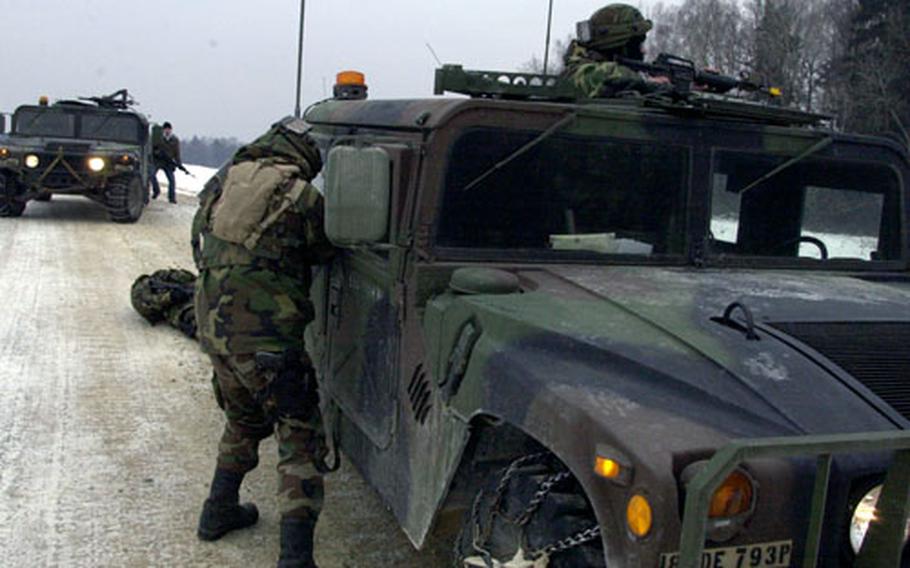 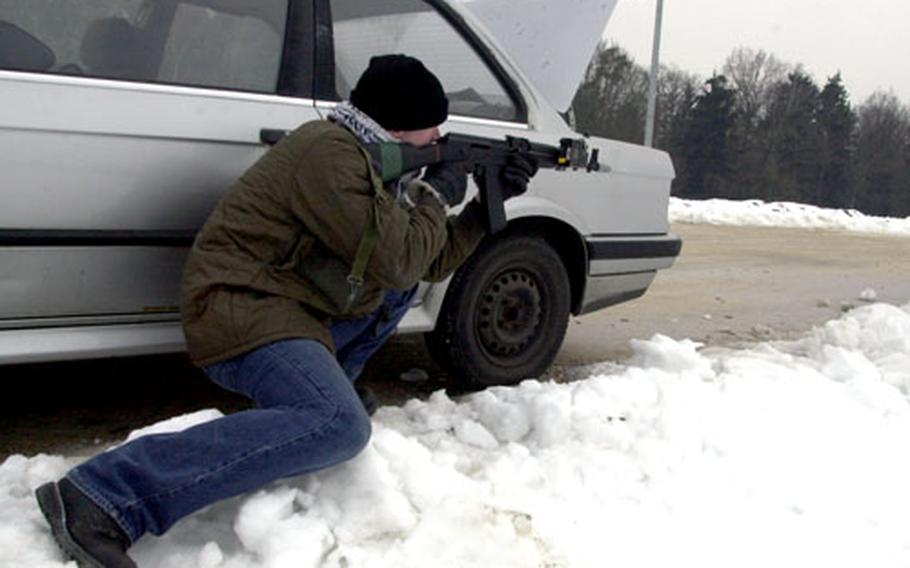 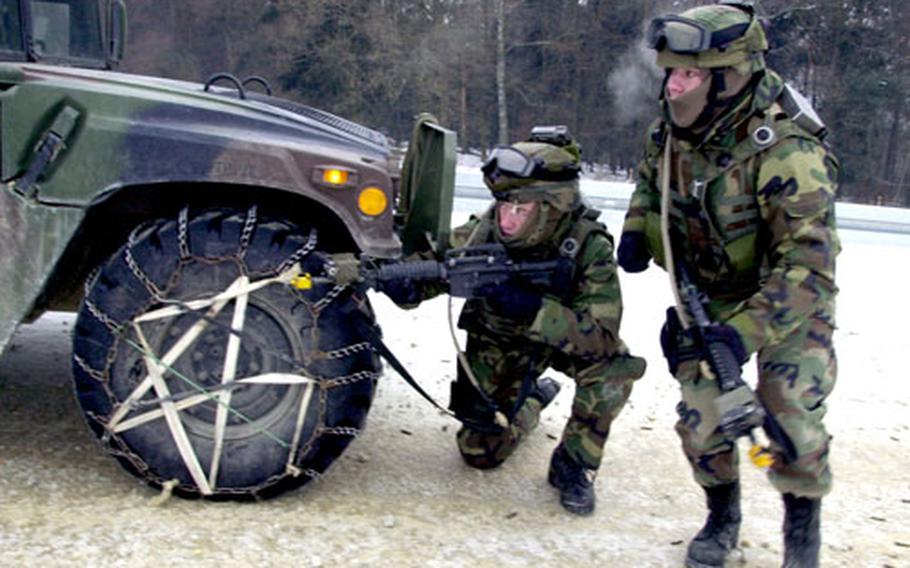 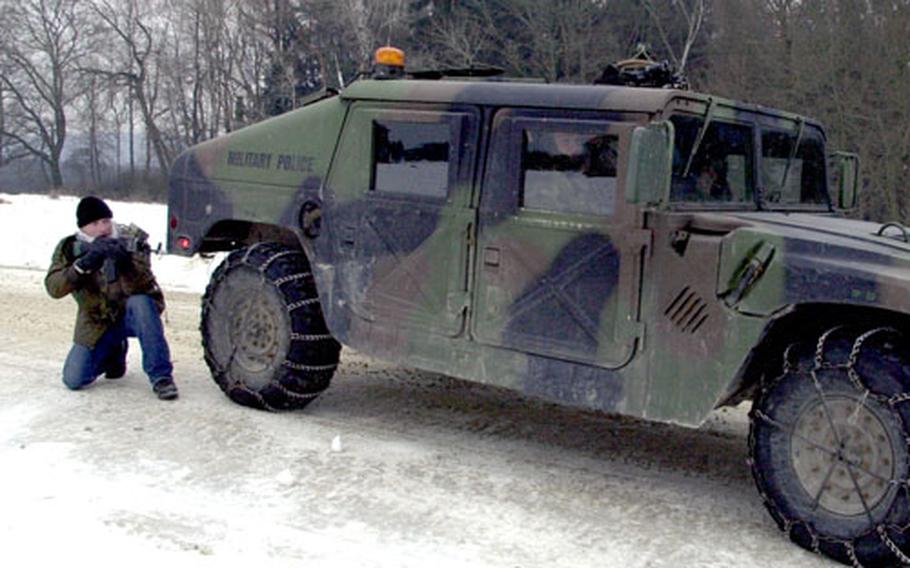 HOHENFELS, Germany &#8212; A new improvised explosive device training lane here was the venue for a mock battle Wednesday between soldiers from the 95th Military Police Battalion and role players acting as insurgents.

The MPs were at the Joint Multinational Readiness Center, or JRMC, to practice the sort of missions two of the battalion&#8217;s three companies might face when they deploy to Afghanistan later this year.

Several JMRC observer controllers and insurgent role players arrived at the IED lane ahead of the MPs on a bitterly cold Wednesday afternoon.

Capt. Eric Strong, one of the controllers overseeing the training, said the 95th was learning to train and assess Afghan police at the Military Operations in Urban Terrain site &#8212; a small artificial town at Hohenfels.

&#8220;They go out and gather information on the operational readiness and personnel readiness of police stations. They get information from civil affairs or the unit they are replacing about the police stations in their area of operations and they go out and find out if there are any shortfalls in weapons, uniforms, readiness, training or personnel,&#8221; the 30-year-old Syracuse, N.Y., native said.

At the IED lane &#8212; a stretch of road that resembles a section of Iraqi freeway, complete with a bridge, overpass, roundabout, guardrails and wrecked cars &#8212; the MPs would learn to secure routes, he said.

&#8220;Their task is to conduct route security to allow freedom of movement on the route so convoys can come through without being ambushed by an IED,&#8221; Strong said.

Another observer controller waiting for the MPs, Sgt. Thomas Cochran, 37, of Colver, Pa., said the soldiers would be hit with a complex ambush involving IEDs, small-arms fire and a suicide bomber.

The role players acting as insurgents set up more IEDs nearby to hit the MPs when they reacted to the first one, Cochran said, adding that it was the first time soldiers had trained on the IED lane.

Before long, a convoy of Humvees arrived and was rolling down the road when the first IED &#8212; a smoke canister &#8212; exploded. Then training charges in a BMW and behind a guardrail went off sending smoke billowing around the MPs&#8217; vehicles, one of which was hit.

At the same time, the insurgent role players attacked with small arms, forcing the MPs to fight back with heavy machine guns from the roofs of the Humvees. By the time the insurgents were driven off, medics were treating several MPs wounded by the attack.

Staff Sgt. Aaron Spaulding, the 1st Squad leader for 4th Platoon, 630th MP Company, said his soldiers knew nothing about the attack before the mission but that they became suspicious when they saw the BMW, which had not been on the road the day before.

Such an attack was common in Iraq and something about half of the MPs had experienced in combat during earlier deployments to the desert, the 30-year-old Poquoson, Va., native said.

The 95th&#8217;s senior enlisted soldier, Command Sgt. Maj. Ed Dahl, 41, of Lacy, Wash., said the 272nd MP Company out of Mannheim and the 554th MP Company out of Stuttgart were headed to Afghanistan while the 630th, out of Bamberg, would stay in Germany.

The training not only prepares the units for the sorts of missions they would face in Afghanistan, it also taught individual soldier skills, he said.

&#8220;This gives the soldiers an opportunity to work on individual skills such as dealing with cold weather, using radios and maintaining equipment,&#8221; he said.