IED threat in Bahrain has grown significantly since 2013, report finds 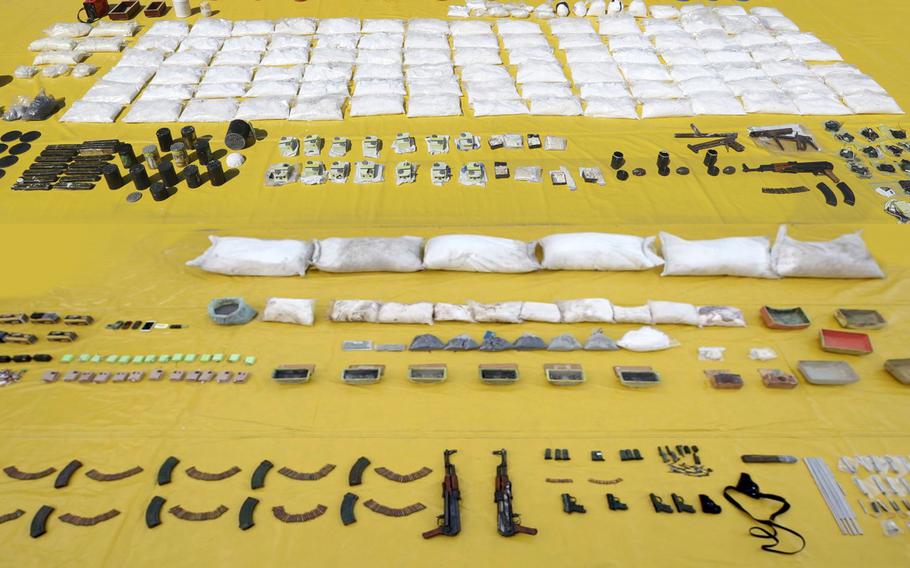 Arms seized from allegedly Iran-backed militants in Bahrain are shown here in a Bahraini government photo from March 3, 2018. The bomb components seized by Bahrain between 2013 and 2018 were similar to those found in weapons intended for Yemen in 2013, London-based Conflict Armament Research said in a report published on Tuesday, December 17, 2019. (Bahrain Interior Ministry)

Militants in Bahrain have obtained sophisticated bomb components like those Iran has allegedly been supplying to Houthi rebels in Yemen, researchers have found.

“Between 2012 and 2018, the [IED] threat in Bahrain grew significantly as materiel recovered from militant groups illustrated an evolution of capabilities and access to resources,” the report states.

The components found were identical or similar to Iranian materiel recovered from the Jihan 1, says the report, referring to a cargo vessel interdicted by U.S. Navy and Yemeni coast guard forces in January 2013.

The cargo ship was allegedly headed for a Houthi stronghold in Yemen and crewed partly by members of Hezbollah and Iran’s Islamic Revolutionary Guard Corps, the report said.

The materiel recovered in Bahrain was typically concealed among shipments of conventional weapons, the report states. Smugglers often appeared to have tried to hide the materiel’s origins by grinding off identifying marks, which CAR said is a hallmark of IED components found in Yemen.

Both Bahrain and Yemen were convulsed by protests during the Arab Spring in 2011, but while unrest in Yemen escalated to a yearslong civil war, Bahrain has managed to avoid a similar fate.

The kingdom, which has supported the Saudi-led coalition to restore the government in Yemen, is an important U.S. ally in the region, hosting some 7,000 American troops, mostly sailors, and the headquarters of the Navy’s 5th Fleet. It has also supported U.S. operations against the Islamic State in Syria, but government repression of opposition groups has “presented a policy dilemma for the United States,” said a report published by the Congressional Research Service last month.

Teams of CAR investigators went to Bahrain in July 2017 and April 2018 to examine and document the materiel seized from militants.

In 2011 and 2012, the investigators say in the CAR report, militant groups in Bahrain used “crude, domestically manufactured” IEDs. But starting in 2013, there was “a significant change in the sophistication of weapons and related materiel available to militant factions in Bahrain.”

They can now make explosively formed penetrators — a weapon that can cut through some armor — and directional fragmentation charges, the researchers say.

They also appear to have acquired radio-controlled IED circuit boards and complex weapons kits from outside Bahrain that resemble those used in Iraq, where Iran-backed militias have been fighting the Islamic State group but have also attacked U.S. forces.

The findings come amid growing tensions in the Persian Gulf region after President Donald Trump backed out of the Obama administration’s nuclear agreement with the regime in Tehran. Trump has called it a bad deal and has stepped up pressure on Iran to renegotiate the agreement.

Last summer, Tehran and Washington seemed poised for conflict, with drones downed by both sides over the course of several weeks and the Pentagon announcing deployments of thousands more troops to the region, along with aircraft and other equipment.