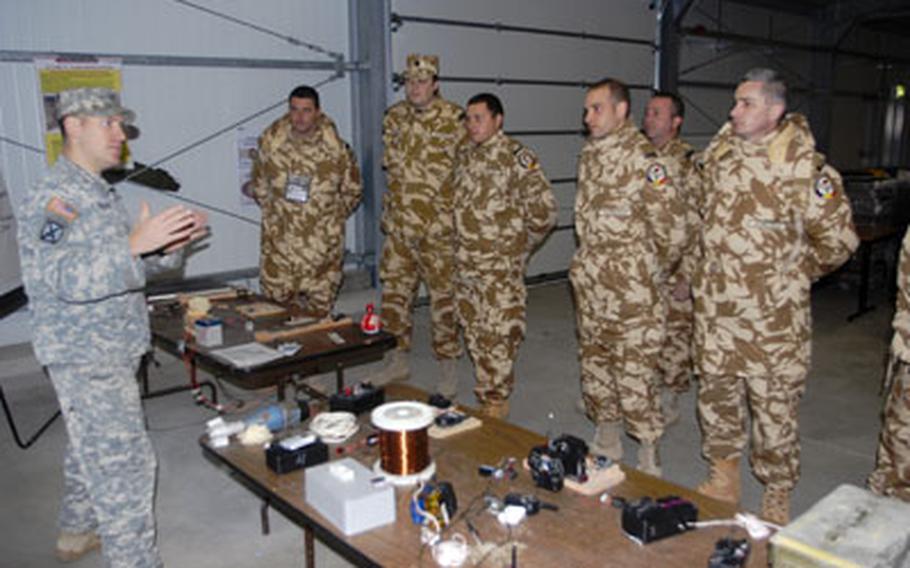 HOHENFELS, Germany &#8212; The Army&#8217;s main training center in Germany is adapting its regimen to teach soldiers how to defeat deadly roadside bombs that are the leading killer of soldiers in Afghanistan.

Col. John Spiszer, commander of the Joint Multinational Readiness Center in Hohenfels, said last week that the service will enhance the improvised explosive device, or IED, academy at Hohenfels.

The Army runs a counter-IED school at the Joint IED Center of Excellence at Fort Irwin, Calif., but until now such a complex facility didn&#8217;t exist in Europe, Spiszer said.

The new training programs come as the military prepares to send an additional 30,000 troops into Afghanistan by next summer and as IEDs have become an increasing threat for troops there.

Since 2007, the number of known IEDs placed by insurgents in Afghanistan has more than doubled, climbing from 2,056 from January through October in 2007 to 6,198 by late October this year.

Meanwhile, the number of coalition forces killed and wounded has more than tripled, showing that not only have the insurgents increased their bombing activity, they&#8217;ve boosted the size and effectiveness of their bombs as well.

Iraqi IEDs are usually made in Iraq by Iraqis using locally sourced materials whereas the Afghan IEDs are often made in Pakistan, he said.

Iraqi IEDs are virtually all artillery and tank rounds looted from Saddam Hussein&#8217;s vast weapons depots that were left unsecured after the U.S. invasion of 2003. In Afghanistan many IEDs are built with ammonium nitrate fertilizer-based homemade explosive, Spiszer said.

"A 20-liter blue jug is an Afghan IED or what almost looks like a big salad bowl with yellow plastic and a fuse sticking out of it," he said.

Generally, the Afghan IEDs are fairly small compared with the Iraqi bombs but a 20- to 30-pound home-made explosive can be an effective weapon, he said.

Terrain is the biggest difference between the counter-IED fight in Iraq and the one in Afghanistan, said JMRC Raptor Team operations officer Maj. Tom Fisher, 38, of Oklahoma City, who helps oversee the counter-IED training for engineers at JMRC.

"We focus on what they (troops deploying to Afghanistan) need to look at in Afghanistan: what routes are navigable, where they can use their equipment, the signatures that IEDs have," he said.

Iraq has sealed roads and highways with overpasses and spaghetti junctions. Many of Afghanistan&#8217;s dirt roads are too primitive to support the heavy armored vehicles that are used to protect troops from IEDs in Iraq, Fisher said.

At JMRC a lot of IED training in recent years has been done on a two-mile long road designed to replicate an Iraqi highway, complete with an overpass and a small town at one end of it.

Now trainers are moving the training onto narrower sections of road in an effort to simulate the sort of terrain challenges troops will face in Afghanistan, he said.

"In Regional Command South the U.S. troops had the mindset of getting on the highway and speeding to protect themselves," Van Veldhoven said. "But speed kills in Afghanistan."

In Iraq convoys speed on highways to make it harder for triggermen to time an IED blast, but in Afghanistan, where IEDs are normally set off by a vehicle driving over a pressure plate, driving fast doesn&#8217;t help, he said.

Spiszer said he is communicating with units on the ground in southern Afghanistan such as the 5th Stryker Brigade, 2nd Infantry Division and 1st Battalion, 4th Infantry Regiment about the latest IED trends downrange in preparation for the Vilseck, Germany-based 2nd Stryker Cavalry Regiment&#8217;s Afghan mission rehearsal exercise next summer.