IED not enough to sway Kaiserslautern airman from the fight 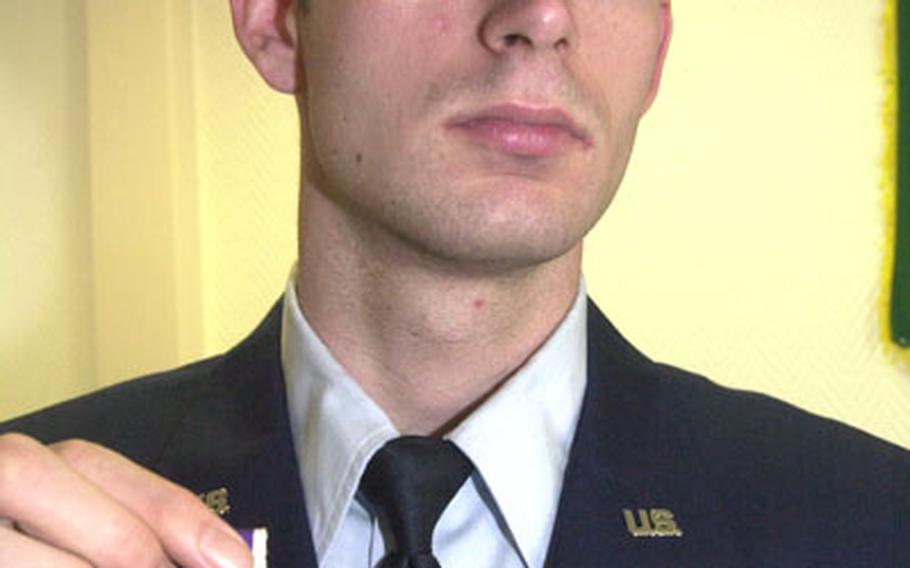 Senior Airman Joseph Wilson holds the Purple Heart he recently received for injuries he sustained in Iraq last year. Wilson was manning the 50-caliber gun in an armored truck when an improvised explosive device detonated among the convoy. (Scott Schonauer / S&S)

KAISERSLAUTERN, Germany &#8212; Senior Airman Joseph Wilson couldn&#8217;t see or hear anything when the roadside bomb went off near his convoy in northern Iraq last year.

The blast put a hole in the driver&#8217;s side reinforced window, smashed the windshield and caught the right side of Wilson&#8217;s face. He was sitting inside the armored truck&#8217;s turret, manning a 50-caliber gun when the vehicle got hit.

The concussion burst the capillaries in his nose and stuck a piece of shrapnel in his face. He has lost some hearing in both of his ears from the sound, which he described as being 100 times louder than firing a gun next to an unprotected ear.

Wilson, an Air Force security officer based in Kaiserslautern, received a Purple Heart last month for the injuries he sustained last August when he was deployed to Iraq to perform security duty. The decoration recognizes American servicemembers who are either seriously injured or killed in action against an enemy of the United States.

Although the injuries kept Wilson out of action for a week, he volunteered to return to Iraq&#8217;s dangerous roads and resume convoy security duty. Unit leaders had offered him a job behind the wire on base, but he declined. He felt like he had to go back.

Wilson, 20, of Phoenix, joined the Air Force more than two years ago, and Germany was his first duty station before his deployment in Iraq.

He said if he hadn&#8217;t sat down inside his turret before the blast, his injures likely would have been much worse.