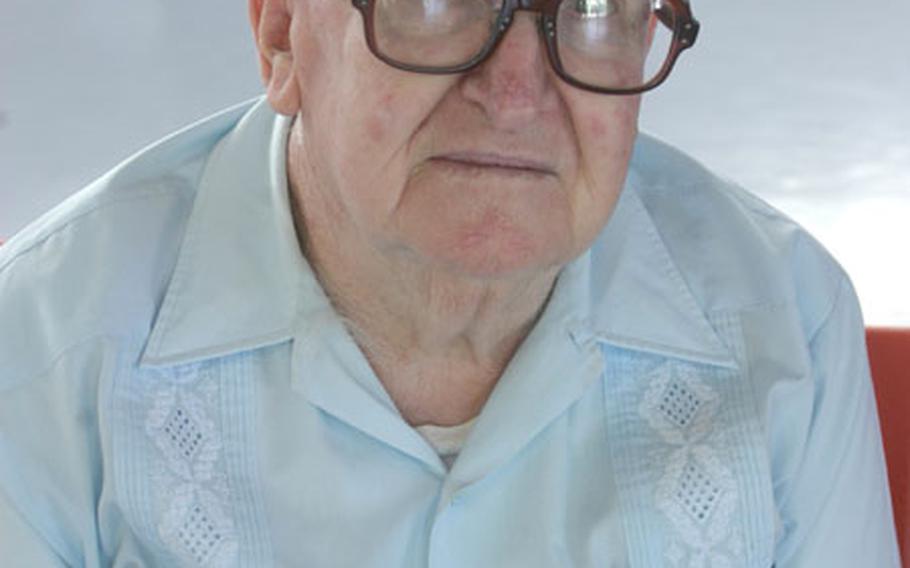 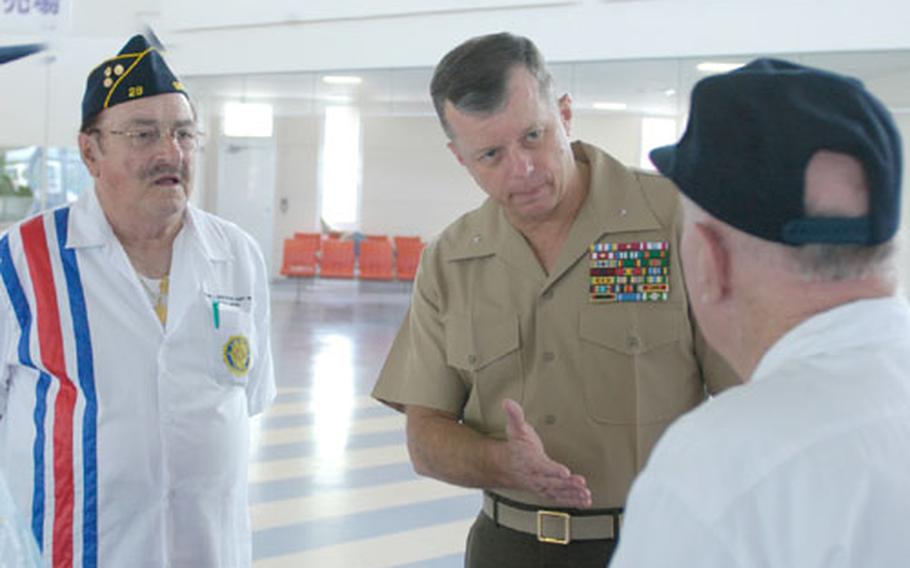 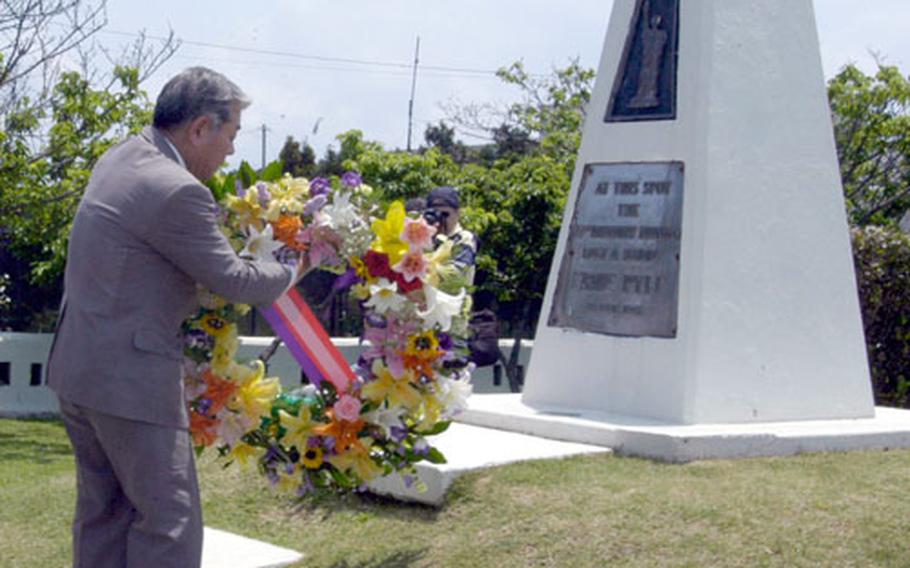 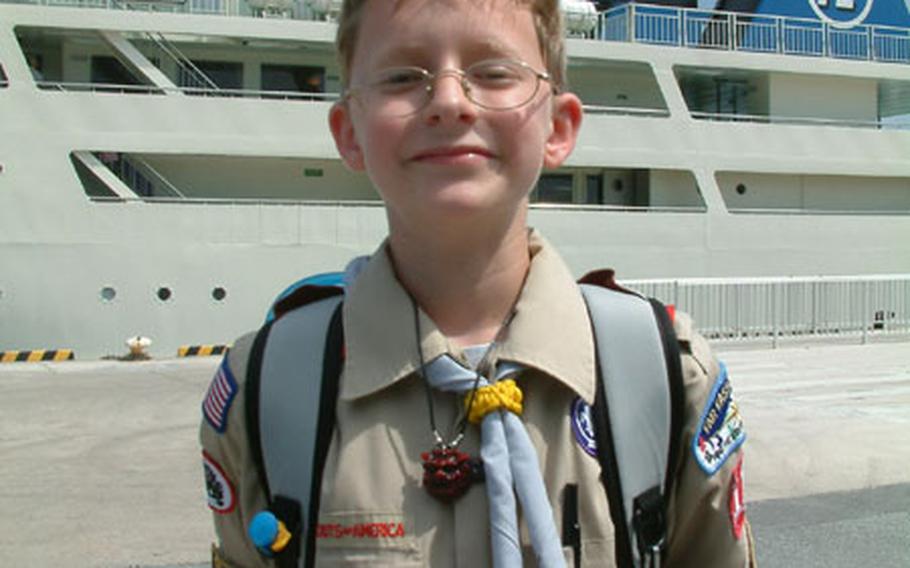 Jacob Ramke, 12, says remembering Ernie Pyle is important because "he was a reporter who actually went out with the troops and wrote about everything they went through." He was one of 14 members of Troop 112, Boy Scouts of America, who took part in the service Sunday commemorating the 59th aniversary of the death of Eerrnie Pyle during the Battle of Okinawa. (David Allen / S&S) 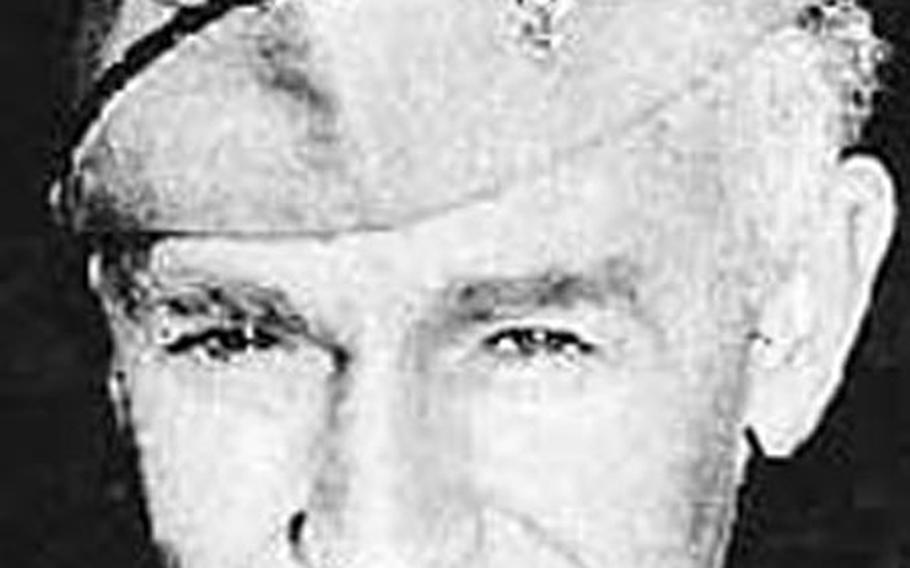 IE SHIMA, Okinawa &mdash; About a hundred people gathered on this tiny island off the northwest coast of Okinawa on Sunday to remember a newsman who brought war home in the most personal terms.

Ernie Pyle, a reporter who eschewed the safety of command posts and made a niche for himself in the foxholes of the frontline troops during World War II, died 59 years ago on his way to another battle.

As he rode in a jeep to what passed as the front in a ferocious battle for the island&rsquo;s airstrip during the Battle of Okinawa, a Japanese machine gunner sprayed the vehicle. The jeep jammed to a stop and Pyle and the other passengers scrambled out, diving for ditches on either side of the dirt road.

When the shooting stopped, Pyle raised his head to ask a friend on the other side of the road if he was all right. A sniper&rsquo;s bullet caught him in the head.

Pyle died four days after President Franklin Roosevelt passed away. To an American public nearing the end of that terrible war, news of both deaths was shattering, each in its own way.

&ldquo;We followed his reports from Europe all through the war,&rdquo; said Ed Zobreck, 73, a retired airman and one of a contingent of members of American Legion Post 28, which sponsored the event. &ldquo;This is an important annual event for us.&rdquo;

&ldquo;I try to make sure I always come out here for this,&rdquo; said Bill Damico, 71, a retired Marine who has been on Okinawa &ldquo;off and on&rdquo; since 1955.

&ldquo;Ernie Pyle was a man who was down with the troops, down in the trenches with the guys,&rdquo; he said. &ldquo;He wrote simply, for the common man, so you could understand him and what the troops were going through.&rdquo;

Pyle was a reporter for the Scripps-Howard Newspaper Alliance. His reports from the front were read by millions of Americans during World War II. He was so beloved by the GIs he covered, always making sure he got their names and hometowns right, that the men of the Army unit he was covering erected a monument on the spot where he was killed.

The site is owned by American Legion Post 28 and maintained by the small U.S. Marine detachment assigned to the island.

Panter said his mother, a WAVE (Women Accepted for Volunteer Emergency Service) during the war, recently told him about keeping up with the war news by reading Pyle&rsquo;s columns.

When he heard of Pyle&rsquo;s death, Bradley remarked, &ldquo;I have known no finer man, no finer soldier than he.&rdquo;

&ldquo;There are really two wars and they haven&rsquo;t much to do with each other,&rdquo; Steinbeck told a reporter for Time. &ldquo;There is the war of maps and logistics, of campaigns, of ballistics, armies, divisions and regiments &mdash; and that is General [George] Marshall&rsquo;s war.

&ldquo;Then there is the war of the homesick, weary, funny, violent, common men who wash their socks in their helmets, complain about the food, whistle at the Arab girls, or any girls for that matter, and bring themselves through as dirty a business as the world has ever seen and do it with humor and dignity and courage &mdash; and that is Ernie Pyle&rsquo;s war.&rdquo;

Today&rsquo;s infantrymen still owe Pyle a debt of thanks. It was largely due to his columns from the front that Congress passed a bill (called the &ldquo;Ernie Pyle Bill&rdquo;) granting them combat pay similar to an airman&rsquo;s flight pay.

&ldquo;As our nation is involved in combat today, maybe we need another Ernie Pyle to tell their story,&rdquo; Panter said.

On the ferry to Ie Shima, Panter talked about why it is important to remember Pyle.

&ldquo;We need to teach our young people the significance of these things as our World War II vets grow older and their ranks thin. We need to remember their great sacrifices and one way to do that is to remember Ernie Pyle and read what he wrote.&rdquo;

Jacob Ramke, 12, the son of an Air Force master sergeant, was one of 14 Boy Scouts from Troop 112 who took part in the memorial. He had a quick answer when questioned about why he was there.

&ldquo;Ernie Pyle was a reporter who actually went out with the troops and wrote about everything they went through,&rdquo; Ramke said.

The crowd at Sunday&rsquo;s memorial was a mixed bag of Marines, Boy Scouts, graying veterans and Okinawa officials. Ie Shima Mayor Seitoku Shimabukuro laid the first wreath, as he has every year during his 15 years in office.

At the end of the ceremony, two Marines in dress blues played a haunting taps, the somber tune played over the graves of American soldiers since the Civil War.

Pyle&rsquo;s letters revealed a foreboding that he wasn&rsquo;t coming home when he reluctantly set out to cover the Pacific theater as the war in Europe wound down.

&ldquo;What can a guy do?&rdquo; he told a friend. &ldquo;I know millions of others who are reluctant too and they can&rsquo;t even get home.&rdquo;

He said the war was bound to catch up to him sooner or later.

Death apparently was on his mind just before he made his umpteenth visit to a battlefield, this time on tiny Ie Shima. After he was killed, soldiers found the rough draft of a column he intended to submit when the war in Europe ended.

He wrote of &ldquo;the unnatural sight of cold dead men scattered over the hillsides and in the ditches along the high hedgerows throughout the world.&rdquo;

&ldquo;Dead men by mass production &mdash; month after month and year after year,&rdquo; read the column the soldiers pulled from Pyle&rsquo;s pockets as his lifeless body lay in the ditch.

&ldquo;Dead men in such monstrous infinity that you come to almost hate them.&rdquo;

Who was Ernie Pyle?