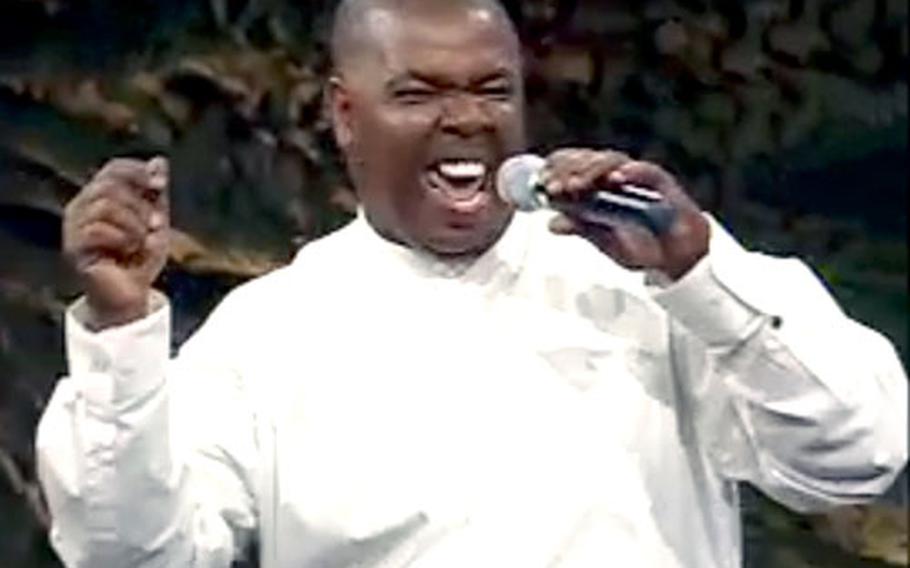 Sgt. William Glenn, an Army National Guardsman assigned to Darmstadt, Germany with the 258th MP Company, sings “Ain’t Too Proud to Beg,” made famous by the Temptations, during Wednesday’s elimination round in the Military Idol competition at Fort Gordon, Georgia. (Courtesy of Military Idol)

WASHINGTON &#8212; Sgt. William Glenn didn&#8217;t join the Army to sing, but he keeps finding ways to stretch his vocal cords.

As an active-duty soldier in the 1980&#8217;s, he sang at events around the world with the 82nd Airborne Division&#8217;s choir. Now, as a guardsman with the 258th MP Company currently assigned to Darmstadt, Germany, he&#8217;s competing in the first servicewide singing competition.

And he couldn&#8217;t be happier about the mission.

Glenn, 42, is one of five finalists in the competition, which combed the Army for the best singer/soldiers in the world. This week 36 crooners who won regional competitions in the contest descended on Fort Gordon, Ga., to compete with the best.

The final five, who will sing for the title Saturday, include three U.S. soldiers from Germany: Spc. Festus Tobeola of Schweinfurt, Spc. Richard Sianoya of W&#252;rzburg and Glenn.

Tobeola is a native of Nigeria who has served with the 177th Armored Battalion since 2001. He said he studied drama and was friends with musicians in college, but his only real vocal experience before the competition was &#8220;just singing in the bathroom for kicks.&#8221;

Sianoya, a 21-year-old from the Philippines who has served with the 523rd Medical Company for three years, says that although he has performed on stage in the past, &#8220;it&#8217;s overwhelming and exciting, but this is nerve-wracking as well.&#8221;

The five finalists are competing for a $1,000 cash prize and unofficial title of &#8220;ambassador for Army entertainment,&#8221; with the chance to travel around the world for various MWR events.

The format is based on the popular reality show format, with judges critiquing soldiers on their tone and talent.

When Glenn belted out the Temptations&#8217; &#8220;Ain&#8217;t Too Proud to Beg&#8221; during one elimination round on Thursday, country singer Michael Peterson gushed that he wished his voice had Glenn&#8217;s soulful sound.

Glenn, a pastor in civilian life, said he didn&#8217;t know about the competition until he stumbled upon auditions in a base dining hall on his dinner break. Several of his friends egged him on to show off his voice.

The winner of the competition will be announced in a special online show on Sunday.

The Military Idol competition will begin at 2 p.m. EDT Oct. 22.

Fans of the Military Idol competition can only watch Saturday&#8217;s final rounds on the Internet, through the Army Knowledge Online site, https://www.us.army.mil. Links there are also available through the competition&#8217;s main site, www.militaryidol.com.

Video of earlier rounds of the competition is also available online.

In order to watch the live broadcast, viewers will need a fast Internet connection and the latest version of Quicktime, available at www.apple.com/quicktime.

Organizers have also set up a troubleshooting guide and an online help form at the AKO site to deal with technical problems related to the broadcast.