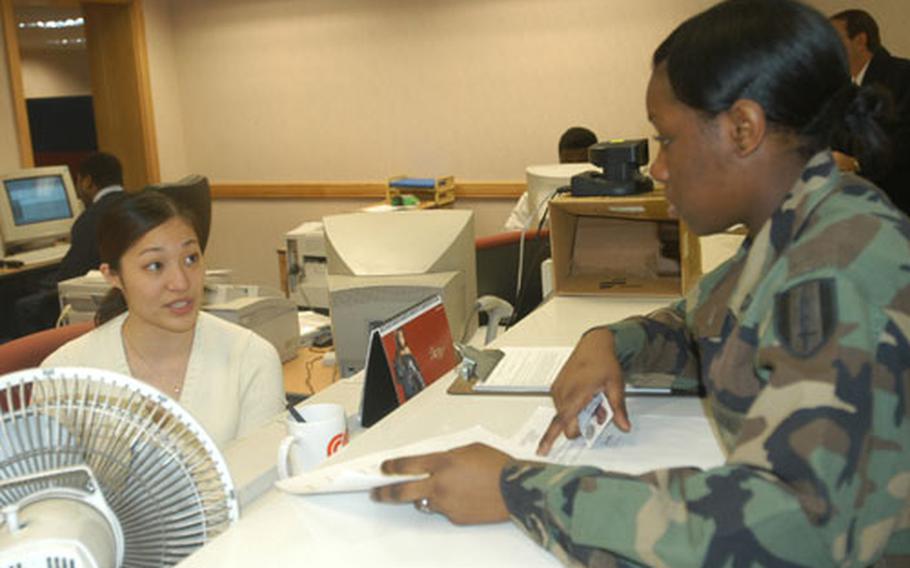 Hellen Kim, a Common Access Card issuer, talks with Pfc. Kemi Warhop, who was getting her ID card replaced because of a name change Wednesday. (Jeremy Kirk / S&S)

Hellen Kim, a Common Access Card issuer, talks with Pfc. Kemi Warhop, who was getting her ID card replaced because of a name change Wednesday. (Jeremy Kirk / S&S) 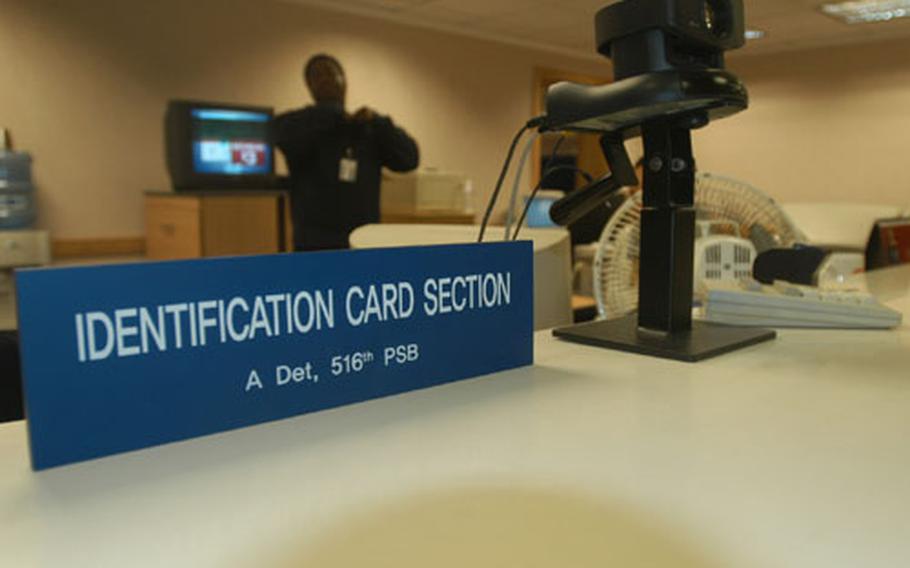 Some holders of the older version of the Common Access Card have had information such as Social Security numbers wear off the back. Bases around the Pacific are now laminating both sides of the card and will replace worn ones. (Jeremy Kirk / S&S)

YONGSAN GARRISON, South Korea &#8212; Nearly 25 percent of the U.S. military&#8217;s new, high-tech identification cards, which cost $8 each, malfunctioned within a year of being issued, Pentagon officials told Stars and Stripes.

Problems included bar code and other information wearing off the back of the cards and a gold-colored computer chip that can contain information such as a person&#8217;s name, gender, benefits, blood type and medical records popping off the front of the cards.

Since the companies issuing the new Common Access Cards began laminating the cards&#8217; backs, the failure rate has dropped to about 11 percent, Pentagon officials said. Additional details on the problem with the chips were not available.

Pacific-based companies declined to provide numbers on how many cards they&#8217;ve reissued or laminated and referred all queries to the Pentagon. Worldwide statistics on the number of card failures &#8212; and cost to the Defense Department &#8212; were unavailable by deadline.

The IDs are used for everything from base and e-mail account access to storing pay, medical and benefits information.

When they were first issued in 2001, 23 percent failed, according to the Pentagon. Users reported that information printed on the backs of the plastic cards began to wear off as quickly as two weeks after issue.

South Korea and a few bases in Germany were the first places to issue the CAC, which is designed as a transition to paperless offices in which personnel records are linked by the card.

Even with all the high-tech possibilities, many base functions still gather Social Security numbers by reading them off the back of the cards. Video store clerks and commissary cashiers frequently have to ask people for information that has worn off.

The area over the chip on the card&#8217;s front was not laminated, and users and issuers in Okinawa said the chips were popping off.

Officials around the Pacific downplayed the problem, saying complaints were minimal. But largely, they declined to provide statistics.

Pfc. Kemi Warhop and her husband, James, put their cards in the clear plastic wrappings used to safeguard long-distance phone cards. &#8220;There&#8217;s no other way to protect it,&#8221; said Warhop, of the 201st Signal Company at Yongsan Garrison.

Warhop was getting a new ID card Wednesday because of a name change after her recent marriage.

A defective card is a no-go for base access. The cards are confiscated and personnel are required to get new cards.

Bases around the Pacific reported starting the two-sided lamination at different times. In South Korea, Osan began about six months ago; Kunsan Air Base, in February 2003, according to officials. At Yokosuka Naval Base, Japan, both-side lamination started around November. At Kadena Air Base on Okinawa, about 6,700 personnel have the CAC. The base began issuing them in March 2002 and laminating the backs in February 2003.