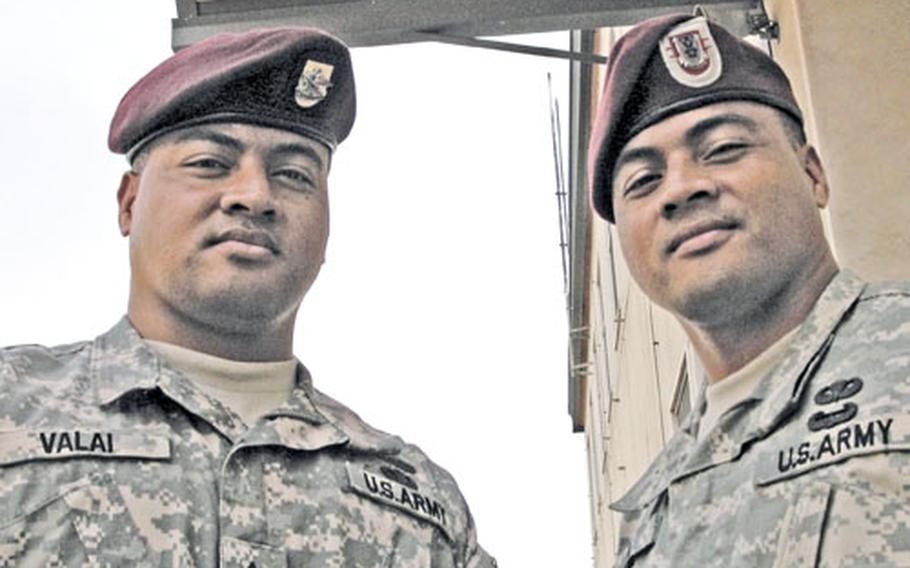 Mistaken identity has become the norm here in northern Italy. Since arriving in 2003, the Valai brothers have left friends and commanders alike wondering which Valai stands before them. Is it Paulo, a member of the 173rd Support Battalion, or his older-by-two-minutes brother, Petero, who serves with the 2nd Battalion, 503rd Infantry? When they don&#8217;t have their unit berets on, it gets even trickier.

The Valai brothers, 31, joined the Army together nearly 10 years ago. The American Samoa natives have since managed to be stationed together throughout their career, moving up the Army ranks side-by-side after starting out at Fort Bragg, N.C.

Even the twins&#8217; parents had trouble telling them apart.

&#8220;When we were growing up, my mom and dad were confused,&#8221; Petero said of their uncanny twin-ness. The young brothers would automatically answer their mother&#8217;s call, regardless of which twin she was looking for.

The affable and soft-spoken brothers sometimes catch heat from their commanding officers before the confusion is settled. Paulo once got grilled for shopping while his brother was supposed to be at a formation.

The inseparable brothers Valai also have been able to lean on each other during deployments, serving concurrently through tours in Kosovo, Iraq and Afghanistan.

Capt. Tavi Brunson, who oversees Paulo&#8217;s Company A, 173rd Support Battalion, said that after a year of overseeing Paulo, he can discern who is who.

Despite the temptation, the Valai brothers have never pulled the patented identical twin switch that is a universal staple of formulaic situation comedies, fooling their lady friends or unit buddies.

But the brothers&#8217; decade-long trip through the Army together is about to end. Paulo and Petero, who have worked, lived and fought together in one way or another through most of their lives, will soon be apart.

Paulo is heading to Fort Drum, N.Y., later this year, a move neither brother seemed particularly excited about.