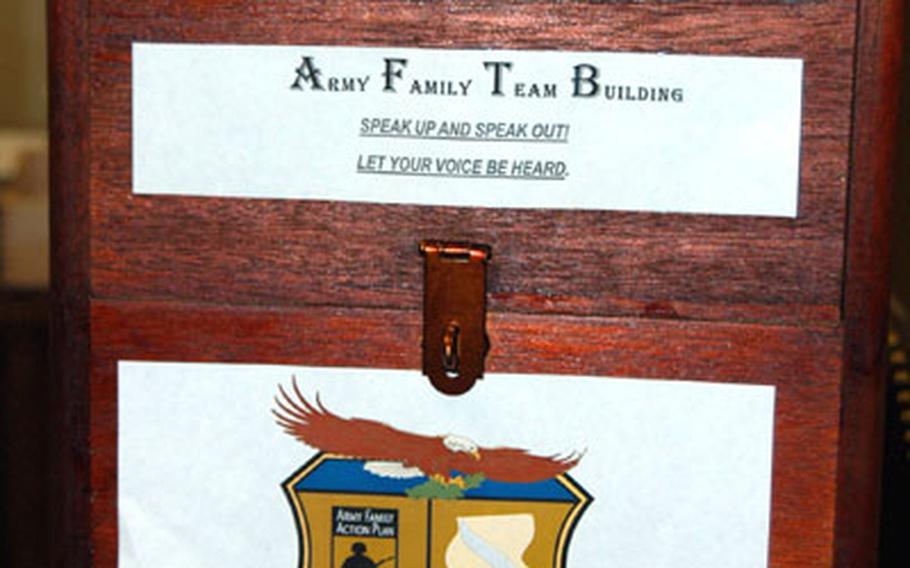 Suggestions boxes like this one will be placed at various locations on Area II bases, including the Post Exchange and Commissary on Yongsan Garrison. (Teri Weaver / S&S)

YONGSAN GARRISON, South Korea &#8212; Soldiers should be able to carry backpacks while in uniform.

And teens in the Yongsan area should have their own place to hang out after school.

All those ideas &#8212; now current policies or programs &#8212; came about from small groups of soldiers, officers and family members sitting around and hashing out changes that might make life better in the military, said Brenda McCall, director of the Area II Family Support Division.

Each year, dozens of groups throughout the Army hold meetings to establish Army Family Action Plans. In Area II, those meetings will occur in October, and the Family Support Division wants suggestions now.

&#8220;If you want your voice to be heard, fill out a card,&#8221; said James Greene, who works at Family Support and is running the Area II meeting this fall.

A group of teen delegates will meet Oct. 14 from 6 p.m. to midnight. Last year, the group suggested designating a place for teens to hang out after school other than a room in the middle school at Yongsan.

Now they have their own building next to the driving range on South Post. For $18 a year, teens have access to the center, which includes games, movies and magazines.

Bo Fluharty, the middle school teen director, helps run the center. She says about six regulars come by each day, and other groups meet weekly.

Not all ideas get approved or make it to the top of the list, McCall and Greene said. Recently, a group suggested Yongsan should have an outdoor track, but the idea was dismissed because most USFK personnel are being moved to the central part of the peninsula.

The suggestions are just starting to come in, said Greene. He guessed that one might come up in the next few weeks.

Got an idea? If you have a suggestion for an improvement for military life or for an installation in Area II, fill out a form at one of the 15 suggestion boxes on bases in the Seoul area. You can also call 738-3617 or e-mail james.l.greene@korea.army.mil.