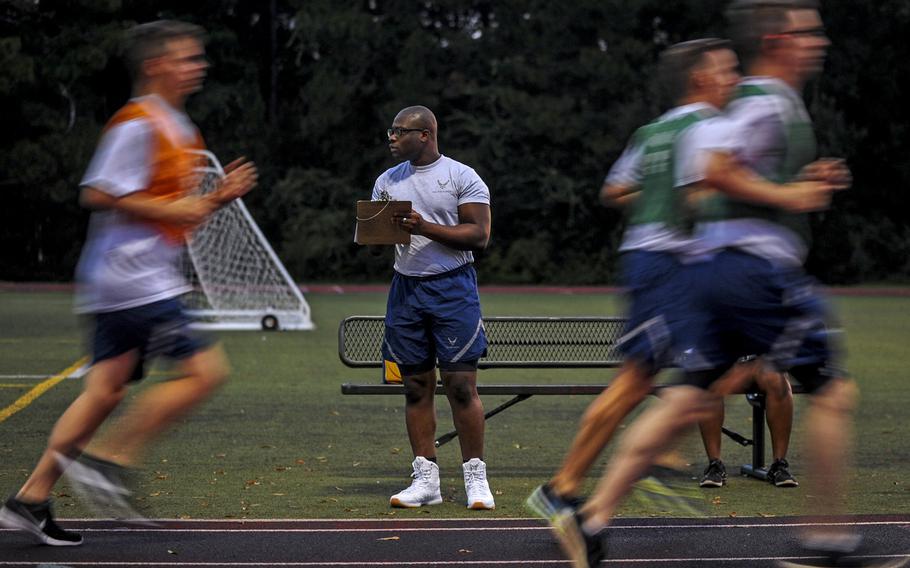 A recommendation to eliminate the Air Force physical fitness test has shot to the top of the rankings on the service’s main idea submission platform.

The fitness program proposal, submitted Oct. 16 to the Airmen Powered by Innovation website, has received almost 800 votes and is now the most popular suggestion for Air Force Spark Tank 2021, an annual campaign designed to spur creative solutions and improvements by airmen.

Senior Master Sgt. Leslie Finley uploaded the pitch, arguing that the Air Force should change to a monthly, endurance-based program instead of conducting tests once or twice a year.

The service suspended physical training testing May 22 due to coronavirus concerns. Testing is scheduled to resume in January.

Finley, who is with the 59th Medical Wing out of Joint Base San Antonio, Texas, argued that the testing program doesn’t lead to a healthy lifestyle, and cites the service’s new top enlisted airman’s vision in a proposal for a focus on sustained fitness.

“We believe that the time for change is now,” Finley wrote. “Chief Master Sergeant of the Air Force [JoAnne] Bass laid out her vision in 2020 with the following statement: ‘As airmen I would like to see us in a place where we’re not so much focused on the PT test as we are more about fitness and readiness.’”

The switch to gender-neutral minimum monthly requirements for cardiovascular and strength training would eliminate test stress, increase year-round fitness activity, and decrease last-minute injuries that often occur ahead of tests, the proposal stated.

Instead of a test, units would implement new requirements, such as running 20 miles and spending four hours at the gym per month, which would be tracked using an application on a phone or smart watch that monitors physical activity.

However, a plan involving a fitness app could face security challenges. The Pentagon barred the use of fitness trackers and similar phone apps at sensitive locations in 2018 after the app Strava published a global “heat map” that revealed locations of U.S. forces in Iraq and Syria.

Funding may be required for the development of an application capable of tracking, collecting data and receiving information from other fitness apps, Finley wrote.

Finley’s proposal also would have units monitor compliance with the requirements, and fitness programs could be tailored to the individual.

The Air Force already requires unit fitness program managers, and base testing offices could instead focus more on nutrition guidance and coaching, the proposal said.

The idea has received mixed reviews on social media, while garnering more than 1,100 comments on the unofficial Air Force amn/nco/snco Facebook page.

“I love this idea,” Thomas James commented on the web page. “It helps people maintain fitness, and even works around injuries. It assures that people take care of themselves without giving them an anxiety ridden ‘date to be fit’ by.”

Others said they prefer the annual test.

“It’s easier and less taxing than having my hand held throughout the month and having the Air Force prying even deeper in my life,” commenter Alexander Docter wrote on the Facebook page. “I prep for my fitness test a month out, take the test, get a 90 and don’t have to deal with it for 12 months.”

The selection process for idea submissions like Finley’s will look at the needs for specific capabilities, as well as concerns about safety, policy, Air Force-wide implementation, technical feasibility and scalability, the Spark Tank website stated.

Six finalists will be selected from the submissions to pitch their ideas on stage at the Air Force Association Air Warfare Symposium in 2021.