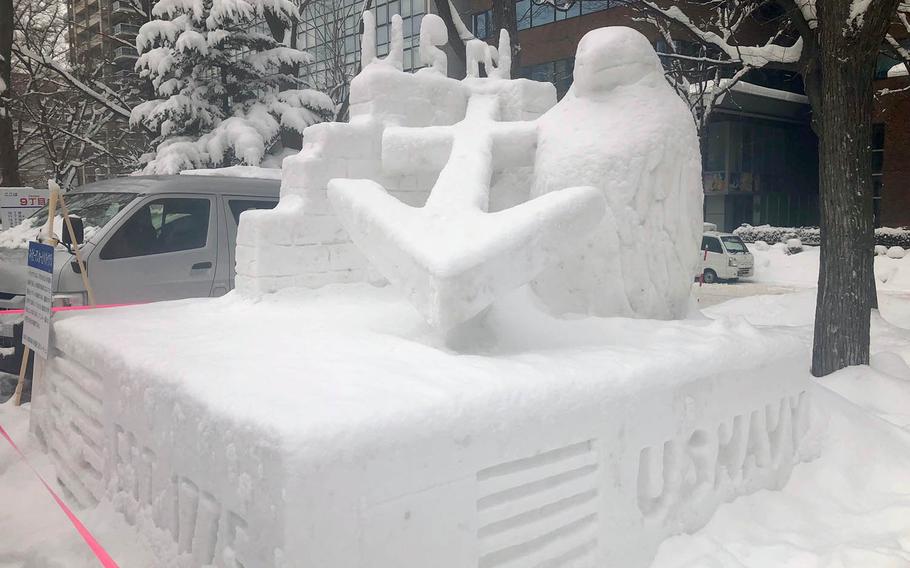 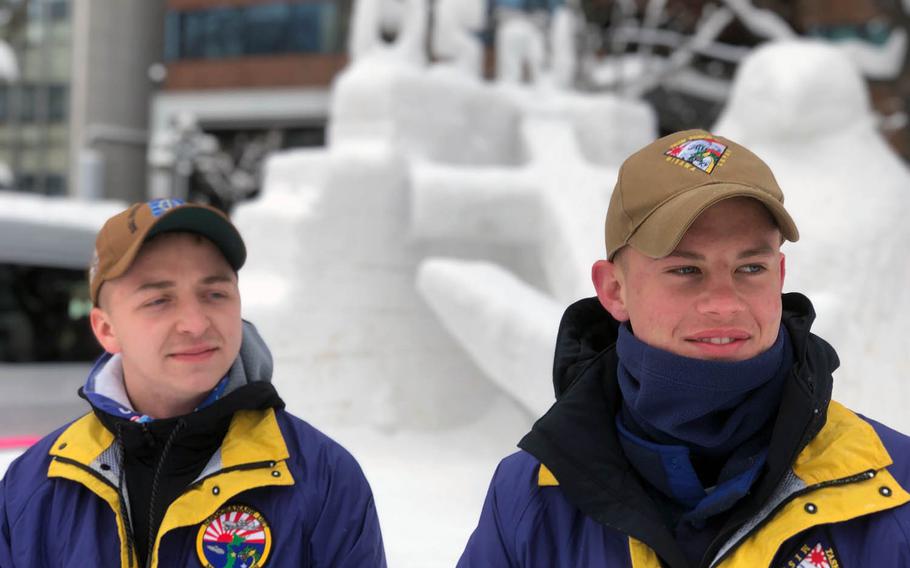 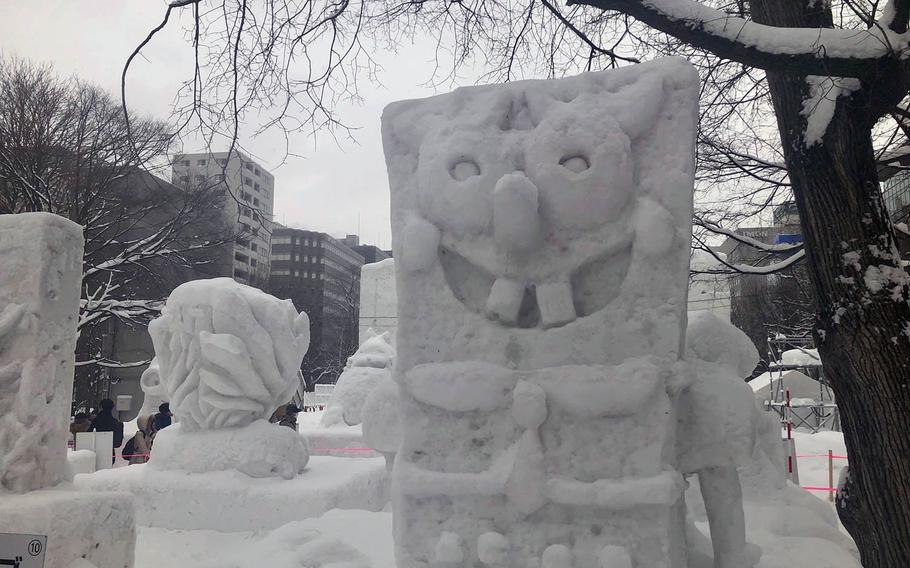 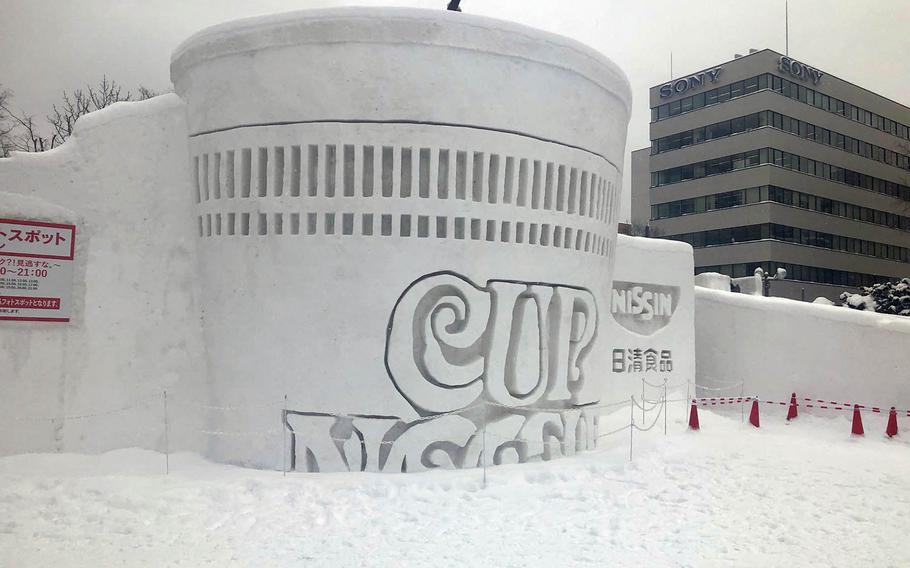 A Cup Noodles container, shown here Thursday, Feb. 7, was one of many snow sculptures at the 2019 Sapporo Snow Festival. (Caitlin Doornbos/Stars and Stripes) 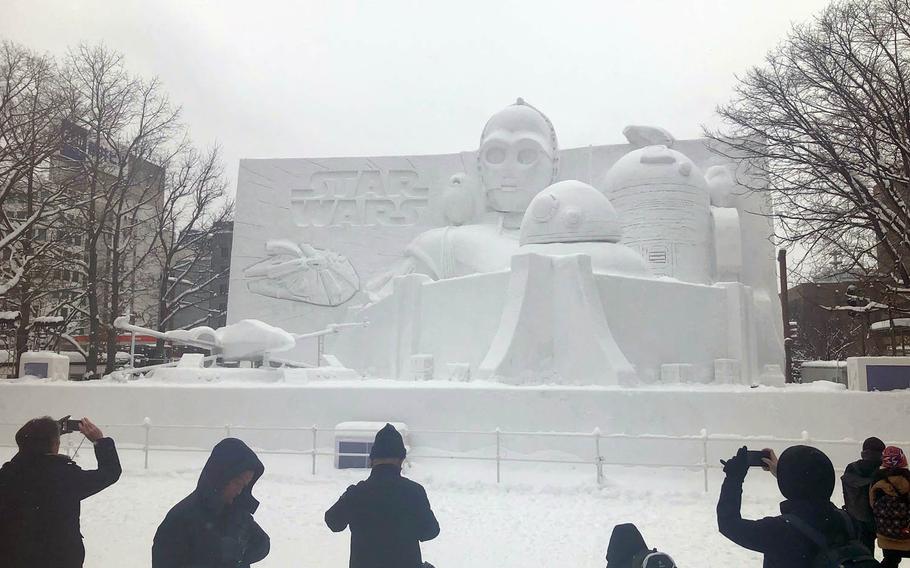 Star Wars characters and spacecraft, seen here Thursday, Feb. 7, were among the many snow sculptures at the 2019 Sapporo Snow Festival. (Caitlin Doornbos/Stars and Stripes) 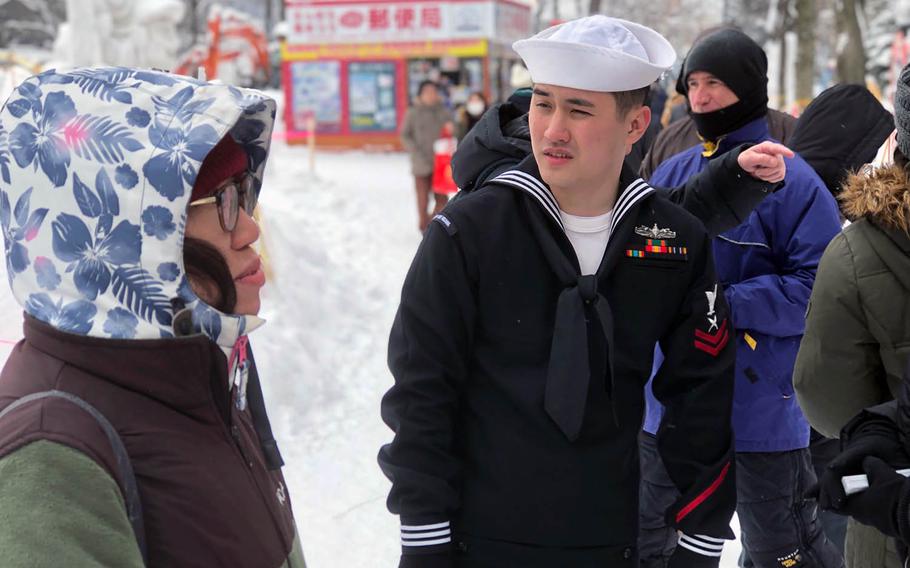 SAPPORO, Japan — A team of 11 sailors from Naval Air Facility Misawa in five days transformed a big block of compacted snow into a frosty monument to the Navy for the 2019 Sapporo Snow Festival this week.

“When you show up and it’s a 6-foot by 6-foot cube, it’s kind of hard to get people to envision what you’re putting on a napkin in a drawing in Misawa,” said Chief Petty Officer Frank Ring, a Seabee chief builder.

It was the 36th year the Navy sent a team to the northern Japanese island of Hokkaido to participate in the event. Chief Petty Officer Chris Norris, a chief construction mechanic, said the festival offers a chance to make a grand gesture of goodwill to people from across the world.

“I would say as a community relations project, this is the gold standard for us in Japan,” he said. “This is the largest one we do, and I think it probably has one of the largest impacts, too – and not just in Japan, because we’re interacting with [people from] Taiwan, Australia, Hong Kong, Thailand, New Zealand, the Philippines, Israel and also people coming from stateside.”

This year marked the 70th snow festival, which draws more than 2 million visitors annually, according to organizers. The event — held Jan. 31 through Feb. 11 — offers food vendors, music performances and winter activities, such as sledding.

Visitors come to admire carvings by professional and amateur teams from around the world that are spread throughout a 13-block park in central Sapporo. This year’s snow sculptures depicted everything from a 6-foot-tall Spongebob Squarepants to a 20-foot-tall Cup Noodles container complete with a built-in ice slide.

The Navy’s creation, complete with an eagle, anchor, American flag and “USN” block letters, was designed to be “easy to explain to the Japanese,” Ring said.

“The eagle represents strength and power, and the anchor represents Navy stability,” he said.

Ring’s idea worked — thousands of festival-goers stopped by to meet the sailors and admire their work throughout the week.

“I knew they were something related to America because of the eagle,” said snow-festival visitor Yoshiko Aoki. “I was here when they were building it last week and I came back to check the completion.”

Aoki, of Chiba, Japan, said she was glad for the chance to practice her English and interact with the Americans. She asked to take a picture with the sailors, who gave her a Naval Air Facility Misawa pin featuring the U.S. and Japanese flags.

“They are my son’s generation,” Aoki said. “Now we are friends.”

“Being out here shows our presence and that we’re trying to get involved with the community,” he said. “It shows initiative — and, especially doing this for 36 years, it’s also consistency.”

The team members were nominated for the 11-day temporary-duty trip by senior-enlisted leaders in their commands for being exemplary sailors, Ring said. While three were Seabee builders, most did not have construction experience.

“The person who did a lot of the building was a master-at-arms,” Norris said. “To see people come together and their creativity come out, it’s really awesome.”

The sailors return to Misawa on Friday, but say they plan to return one day as visitors to the festival.