A Croatian MiG-21 takes off on a training mission. The jets, which formed the backbone of the Croatian air force, are due to be retired in the near future. (Croatian MoD)

A Croatian MiG-21 takes off on a training mission. The jets, which formed the backbone of the Croatian air force, are due to be retired in the near future. (Croatian MoD) 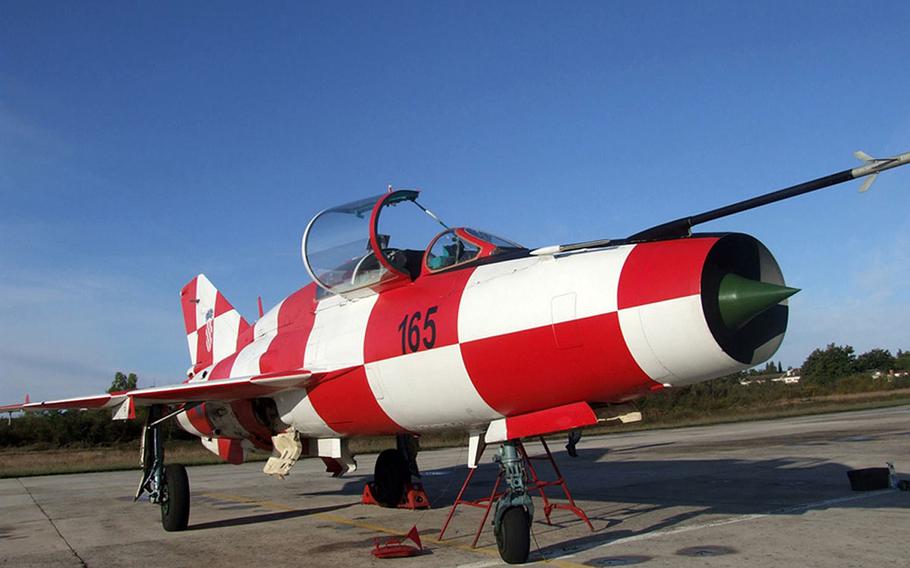 A Croatian twin-seat MiG-21UM. The training version of the Soviet-era interceptor has been painted in the checkerboard pattern of Croatia's coat of arms. (Croatian MoD) A Croatian MiG-21UM twin-seat trainer in flight. Painted in Croatia's checkerboard red-and-white pattern, the plane is one of less than a dozen MiG-21s that remain operational in Europe today. (Croatian MoD)

KAISERSLAUTERN, Germany — During the Cold War, the MiG-21 fighter and the Kalashnikov AK-47 assault rifle epitomized the might of the Soviet Bloc as it confronted the West in Europe.

Although the MiG-21 — dubbed Fishbed by NATO — never saw combat in a NATO-Warsaw Pact war, the most iconic Soviet fighter of the jet age frequently tangled with American and other Western warplanes in hot wars in Vietnam, the Middle East and Africa.

But nearly 60 years after it first entered front-line service with the Soviet air force — and 33 years since production ceased — the single-engine interceptor is reaching the end of the line in Europe.

Although the approximately 14,000 examples built by the Soviet Union, China, India and Czechoslovakia make it the most-produced supersonic jet fighter in history, less than 10 now remain airworthy on the Continent.

Fishbeds still soldier on in Croatia and Serbia, but both nations plan to phase them out within the next two years.

NATO member Croatia has 12 late-model Mig-21 planes in its air force inventory. But Croatian military analyst Denis Kuljis says no more than six are airworthy, with the rest having been cannibalized for spare parts.

“It was a great plane during Croatia’s (1991-95) war of independence,” Kuljis said. “But it really can’t hold its own against modern fighters or anti-aircraft defenses. No amount of upgrades can overcome that.”

The U.S. first gained vital insight on the capabilities of the rugged and agile jet after a defecting Iraqi pilot took one to Israel in 1966. Eventually, the Air Force evaluated a full squadron’s worth of various MiG-21 models.

In Vietnam, they racked up dozens of kills during the eight years they fought against U.S. Air Force and U.S. Navy jets. Although heavily outnumbered, the small MiGs evaded U.S. radar and ambush formations with hit-and-run attacks in which some U.S. jets, including top-of-the-line F-4 Phantoms, were downed or forced to jettison their bomb loads and abort their missions.

The MiG-21 quickly earned a reputation as a versatile and effective short-range interceptor with low operating costs.

The plane’s performance was enhanced over the years, but designers never overcame the limited fuel capacity and lack of space for sophisticated electronic equipment. Another serious weakness was thick windshield framing that reduced forward visibility, a problem during combat.

Despite those drawbacks, the delta-winged Mach 2 interceptor was widely exported and became the backbone of about 50 air forces in Europe, Africa and Asia. It was used in a dozen conflicts during the last 30 years, more than any other fighter in history.

In the 1970s, the U.S. introduced two jets that outperformed the MiG-21 — the F-15 Eagles and F-16 Fighting Falcons. The Soviets countered with MiG-29s and Sukhoi-27s. By the 1980s, the aging Fishbeds were relegated to second-line duties, such as reconnaissance.

David Ivry, a former chief of the Israeli Air Force who battled MiG-21s as a squadron leader in the 1967 Arab Israeli War and as a commander in 1973 and 1982, said the aircraft was a real challenge for all pilots who fought against it.

“But when the fourth generation F-16s and F-15s entered service in the West, they had an advantage in maneuverability and weapon systems that made the MiG-21 inferior in combat ... (although) the MiG-21, as an aircraft, remained reliable and safe for flight,” Ivry said.

Russia has long since retired the MiG-21, which derived its name from the initials of designers Artem Mikoyan and Mikhail Gurevich.

After the collapse of the Soviet Union and the Warsaw Pact, former East European allies joined NATO, bringing more than 200 MiG-21s into the alliance. Except for the handful operated by Croatia, all have since been retired.

Alan Warnes, an editor of Air Forces Monthly, noted the MiG-21 is the last fighter from the 1950s to remain operational and that no other fighter has achieved such longevity.