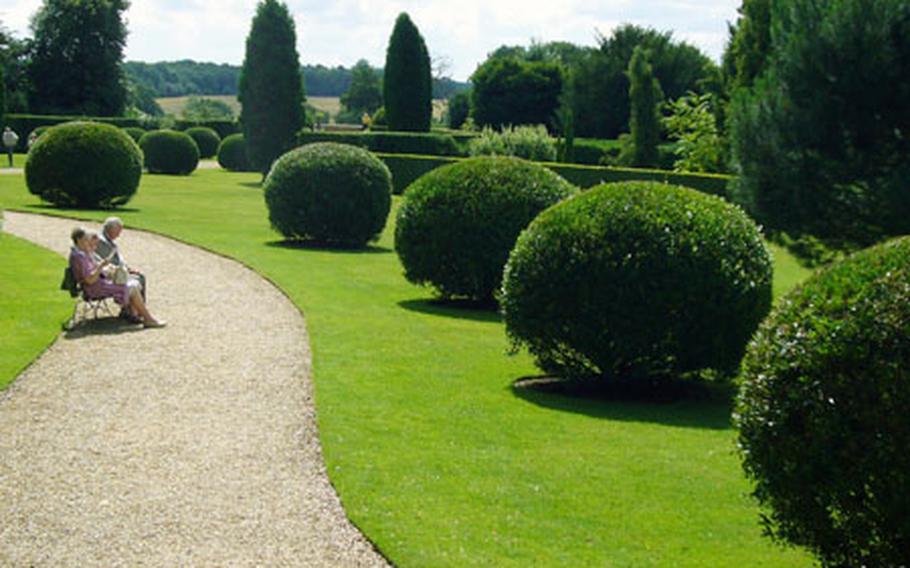 Visitors to the Ickworth estate sit on a bench to soak in the atmosphere of the rear garden. The estate has a unique 18th-century house fitted with a rotunda that towers above numerous acres of woodland and gardens in the quiet countryside. (Sean Kimmons / S&S)

Visitors to the Ickworth estate sit on a bench to soak in the atmosphere of the rear garden. The estate has a unique 18th-century house fitted with a rotunda that towers above numerous acres of woodland and gardens in the quiet countryside. (Sean Kimmons / S&S) 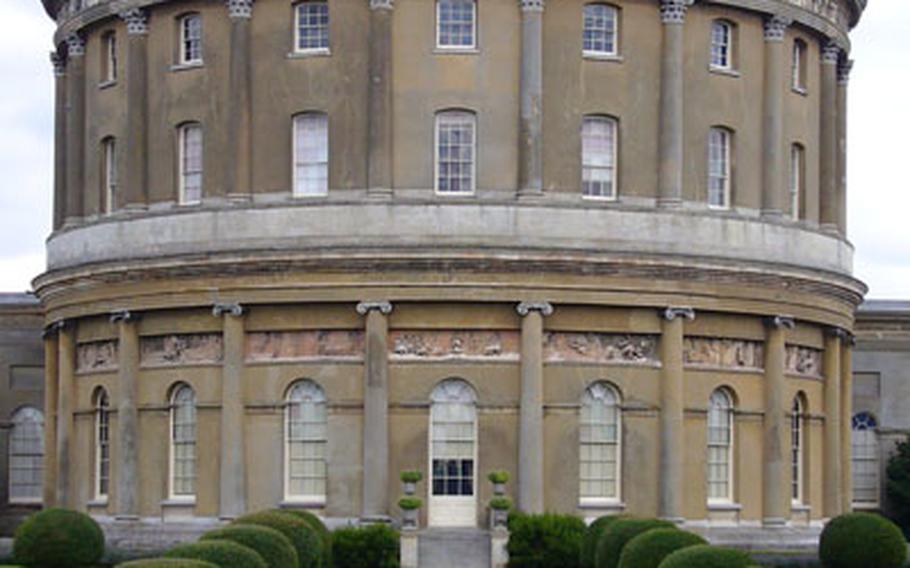 Visitors walk along a garden path in the shadow of the Ickworth House&#39;s rotunda, an architectural feature that dominates the estate&#39;s landscape. (Sean Kimmons / S&S) Tombstones, eerily sunken into the ground, can be seen outside the St. Mary&#39;s Church, also located on the estate. (Sean Kimmons / S&S)

ICKWORTH &mdash; Sometimes one doesn&rsquo;t mind the hustle and bustle of city life, visiting historical sights along with the crowds. Other times, one just wants a peaceful outing filled with scenic open spaces.

In the small village of Ickworth, a few miles southwest of Bury St. Edmunds, visitors can satisfy both moods &mdash; and find far fewer crowds than in London or other major cities.

The Ickworth estate, a historical site protected by The National Trust, brings in sightseers for its unusual 18th-century Georgian house fitted with a rotunda that overlooks 1,800 acres of woodland as well as 70 acres of gardens.

For history buffs, the elliptical house is open for tours only a couple of hours on selected days. Inside, one can roam through its lavishly styled rooms adorned with collections of antique furniture, artwork and silver.

Originally built for the eccentric 4th Earl of Bristol Frederick Hervey, the house served as a residence to the Hervey family until the trust acquired the estate in 1956.

Away from its rotunda, the house&rsquo;s west wing has a visitor center with information on past residents and a restaurant. The east wing has been converted into a four-star hotel with bedrooms ranging from a contemporary feel to a more traditional setting.

A night at this hotel might afford a nice, romantic getaway &mdash; but the price is steep. A standard room starts at 310 pounds while a suite will set you back at least 495 pounds. Breakfast is graciously included in the room rate, though.

Perhaps the highlight of the estate is its well-manicured garden area behind the house. Visitors can wander through passageways in the massive garden formed by its array of trees, blooming flowers and closely trimmed hedges.

Some of the tall hedges can bring back memories from the horror film, &ldquo;The Shining.&rdquo; They don&rsquo;t necessarily form a garden maze or have a crazed killer lurking in them, like in the movie, but you may stop and look around just to make sure.

A short walk from the garden area is the abandoned St. Mary&rsquo;s Church. The doors to the church were closed but its graveyard, with tombstones eerily sunken into the ground, could still be seen outside.

Past the church are walking and cycling paths to the estate&rsquo;s isolated countryside and lakes. The estate is still a working farm, so flocks of sheep and horses are common sights.

Ickworth House, Park & Gardens can be found in the small village with the same name, a few miles southwest of Bury St. Edmunds. Visitors can take exit 42 on the A14 highway, and drive toward Westley and Horringer following the brown Ickworth signs.

What to see: A unique 18th-century Georgian house fitted with a rotunda overlooking 1,800 acres of woodland as well as 70 acres of gardens.