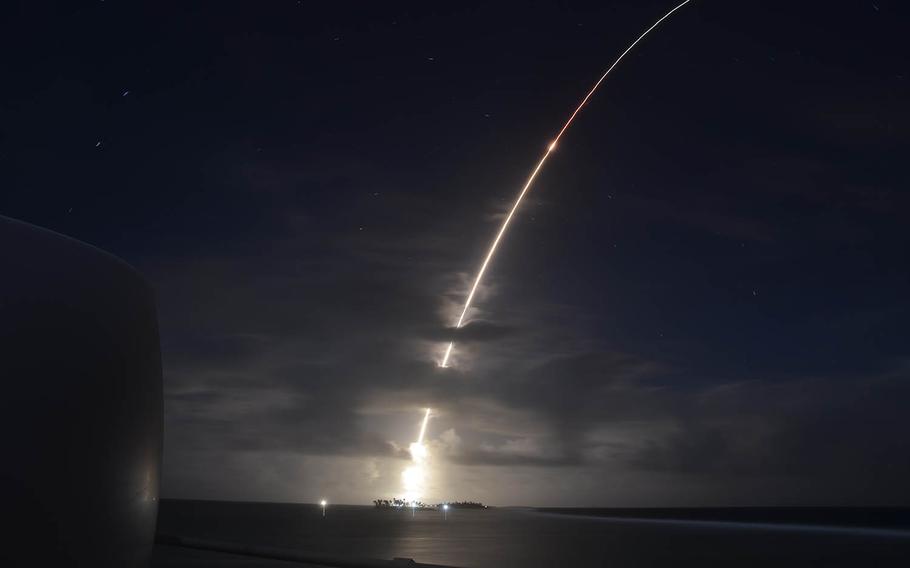 Two ground-based interceptors were used in the test, MDA said in a statement Monday. The first was used to destroy the ICBM reentry vehicle.

The second interceptor “then looked at the resulting debris and remaining objects, and, not finding any other reentry vehicles, selected the next ‘most lethal object’ it could identify, and struck that, precisely as it was designed to do,” the statement said.

The target ICBM was launched from the Reagan Test Site on Kwajalein Atoll in the Marshall Islands, more than 4,000 miles from the two interceptors launched from Vandenberg Air Force Base, Calif.

Space-, ground- and sea-based sensors provided real-time target acquisition and tracking data to a command-and-control center during the test, the statement said. The interceptors were then launched beyond the Earth’s atmosphere, where they destroyed the target.

ICBMs are defined as having a range of more than roughly 3,400 miles.

“This was the first [ground-based interceptor] salvo intercept of a complex, threat-representative ICBM target, and it was a critical milestone,” MDA Director Air Force Lt. Gen. Samuel Greaves said in the statement. “The system worked exactly as it was designed to do, and the results of this test provide evidence of the practicable use of the salvo doctrine within missile defense.”

He described the ground-based defense system as “vitally important” to the defense of the American mainland.