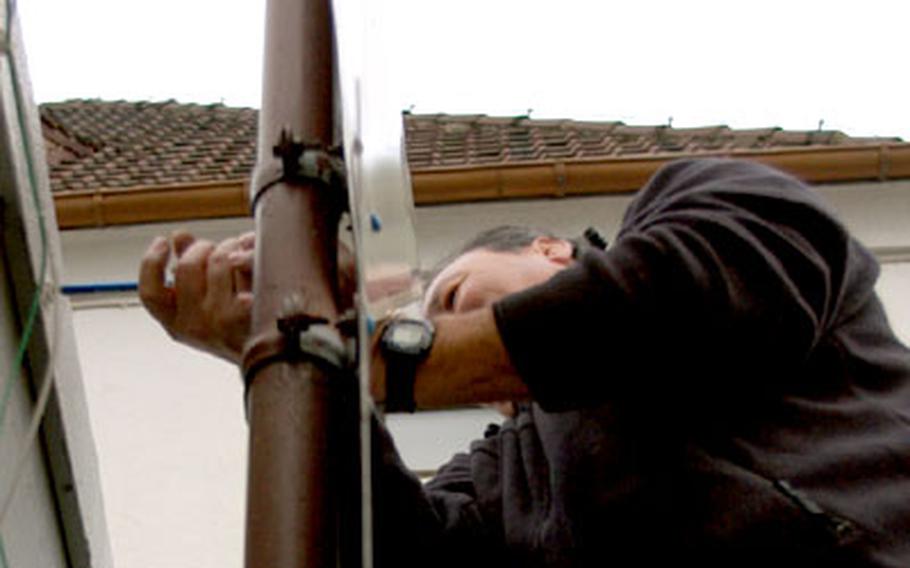 Louis Diaz, a contractor from Science Applications International Corp., installs a cable that will feed information from the guard shack to the central database at Fahlenberg, Germany. (Rick Emert / S&S)

Louis Diaz, a contractor from Science Applications International Corp., installs a cable that will feed information from the guard shack to the central database at Fahlenberg, Germany. (Rick Emert / S&S) 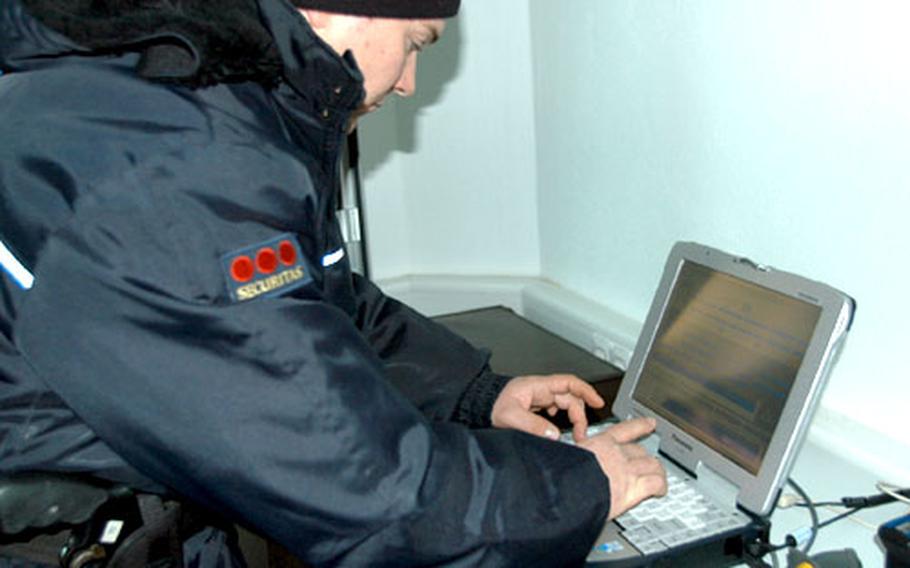 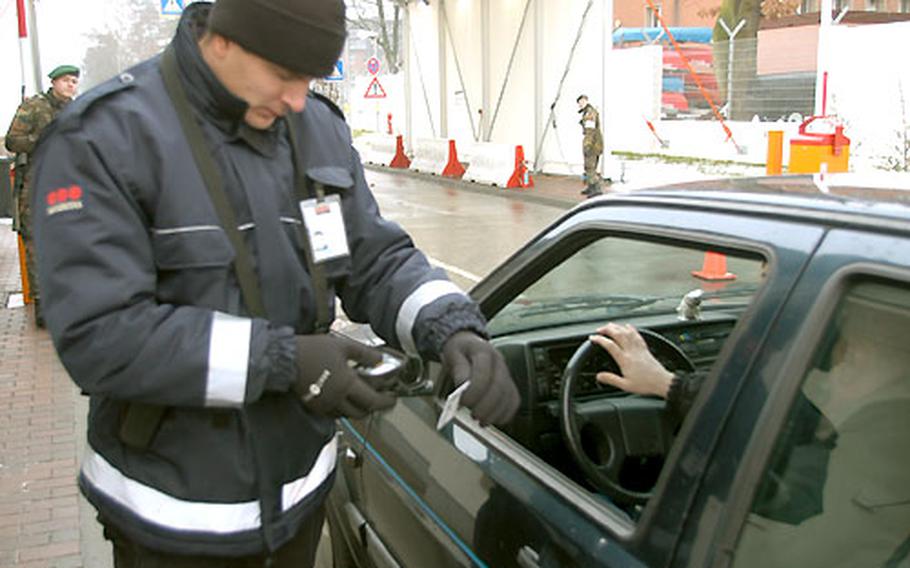 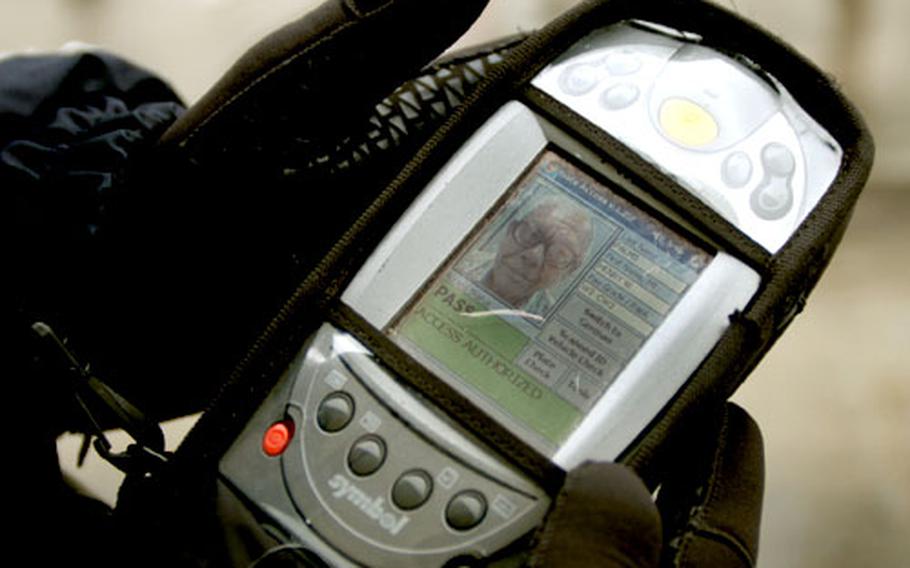 The 279th Base Support Battalion began operating the system at all five of its bases&#8217; gates last month.

The remaining BSBs in the 98th Area Support Group are on track to have the system running by April 1, according to Lt. Col. Bob Brown, 98th ASG provost marshal.

Operation of the system, which is designed to improve control of who enters U.S. military bases in Europe, has gained momentum since Oct. 20, which was technically the last day for all Department of Defense employees and their families and installation pass holders to register, according to Maj. Kevin Sickinger of the USAREUR&#8217;s Provost Marshal Office.

The remaining ASGs are tentatively scheduled to field the system by November, Sickinger said.

Funding to get IACS started is $19 million &#8212; including about $25,000 for each of the 180 gates in USAREUR that will be on the system. After USAREUR has the system running, several U.S. Air Forces in Europe bases in Germany will be added.

As of December, about 96 percent of people eligible had been registered in the system, according to Sickinger. The first IACS registration site opened in February 2003 at Mannheim and the last at Ramstein in June.

Registration sites are located with in- and out-processing sites to make registration for, or removal from, the database part of the checklist of processing that all soldiers do upon reassignment or separation from the Army, according to Maj. Rob McNeil, 279th BSB provost marshal.

In Bamberg, and the 417th BSB in nearby Kitzingen, soldiers deploying or deployed to Iraq posed some hurdles to registration.

Warner Barracks had hundreds of 1st Armored Division soldiers return from Iraq as the system was being fielded at the gates.

Some new computer software prevented headaches for the 417th BSB and 1st ID soldiers about to deploy to Iraq.

&#8220;The new software allowed us to go in with a roster from the command and update the extended [date of expected return from overseas] for soldiers and their families,&#8221; said Maj. Dave Lewis, 417th BSB provost marshal.

&#8220;Otherwise, we would have had to pull these guys in from block leave and training to get them to reregister.&#8221;

Although such changes to personnel information can be made at anytime, if a new ID card is issued, the card holder must reregister with IACS because the new card has a different bar code, McNeil said.

Brown said registration and the system overall has not been all that popular among those living within the 98th ASG reach.

&#8220;There has been a lot of apprehension about this. People are concerned that it will take them longer to get through the gates.&#8221;

But the procedure should not take any longer than a manual ID card check that is done properly, including checking the photo and pertinent information on both sides of the ID card and the second form of identification, according to Sickinger.

And those who still haven&#8217;t registered come November can expect delays.

&#8220;Eventually, people who are not registered will have to park the car, get out and sign in to gain access,&#8221; Sickinger said.

Current Department of Defense identification card holders and installation pass holders register at one of several sites at each base support battalion.

Installation Access Control System registrars input information such as name, unit and date of return from overseas, and take fingerprints and a digital photo. The registration process usually takes about five minutes for DOD ID card holders and about 10 to 15 minutes for installation pass holders.

Within an hour, the ID card holder is registered in the system.

When the card holder arrives at a base gate, he or she presents a single form of identification, the ID card. Security personnel scan the card&#8217;s bar code with a handheld scanning device. Its display screen shows the person&#8217;s photo, name and rank or status and indicates whether the person is authorized to enter the installation.

Each time an ID card is scanned, the information is sent to a laptop computer in the guard shack and then to a central database at the military police desk.

The database keeps track of all who have entered an installation. Reports of that information can be printed out, if need be.

Personnel with U.S. Army Europe&#8217;s Provost Marshal Office can manually input information such as a lost ID card or installation pass to prevent misuse of those items by anyone who may find them.

The system also tracks soldiers who have been discharged or who have left the Army, and can prevent them access to a base.

Local nationals who have been barred from an installation are noted in the system and can&#8217;t gain access even if they remarry and change surnames.