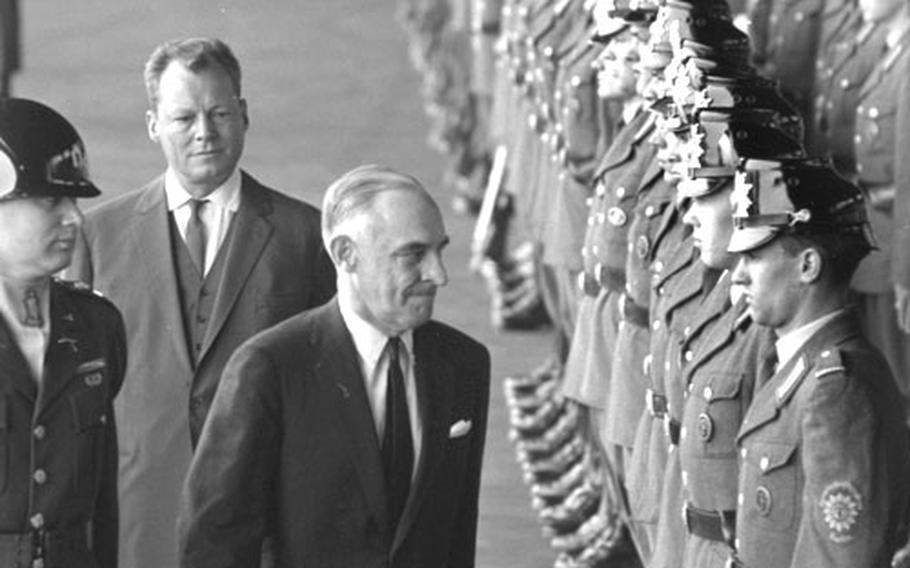 Retired Army Gen. Lucius Clay, at a Tempelhof Airport ceremony honoring him on his departure from Berlin after nearly eight months as President Kennedy's personal representative to the city that had recently been divided by the Wall. (Gus Schuettler/Stars and Stripes)

BERLIN &mdash; Gen. Lucius D. Clay (ret.) said Tuesday if West Berlin should ever be lost to communism it would mean the end of the free world. Then he left the city that has honored him as no other foreigner in modern times.

Ending almost eight months as President Kennedy's personal representative in Berlin, Clay boarded a DC6 airliner shortly before noon to fly to Frankfurt, where he was to change to a U.S.-bound plane.

"Of course, I'm not going to say goodby. I could not leave, however, without saying again that the keystone of freedom is the city of Berlin and if that keystone should ever be lost then freedom would be lost."

"Some time ago I told Mayor (Willy) Brandt that if there were ever an emergency I would come to Berlin. That is why I came. If he sends me word again that I am needed, I'll be on the next plane."

The general expressed confidence that West Berlin will remain a part of the free world because of the pledge of the Allied nations. He said the courage of the people of Berlin will prove to be the deciding factor in the battle for freedom.

Brandt responded and wished the general a good journey to America.

Clay shook hands with Brandt, Gen. Albert Watson II, the U.S. commander here, and other officials who gathered at planeside.

A number of civilian employees at the airport crowded around to watch the farewell ceremony. Several hundred well-wishers gathered at the airport gate to catch a glimpse of Clay and wave goodbye.

An honor guard of Berlin policemen and soldiers from the 2nd Battle Gp, 6th Inf, was on hand, under command of Capt. James S. Budda of Baltimore.

Clay has been a popular figure here since 1948, when as military commander he conceived the idea for the airlift which enabled West Berlin to survive the Berlin blockade. Last week he was made an honorary citizen of the city. He is the only foreigner accorded this honor since Czar Nicholas I.

Mrs. Clay remained out of sight during the farewell ceremonies and presumably awaited her husband in the plane.

(One of the last persons to talk to him as he mounted the steps was an elderly Berlin woman, Sophie Helene Krell, who brought him a bunch of carnations on behalf of a 15-year-old nephew &mdash; Michael Kafert, the AP reported. She said Clay had befriended the boy.

("He couldn't come because it was a school day," she explained. A note dangled from a string around the carnations.

(Handkerchiefs fluttered in the crowd as the airliner moved onto the runway. Clay could be seen smiling out of the window.)