'I like this guy': Trump expected to visit soldier wounded in deadly Syria blast 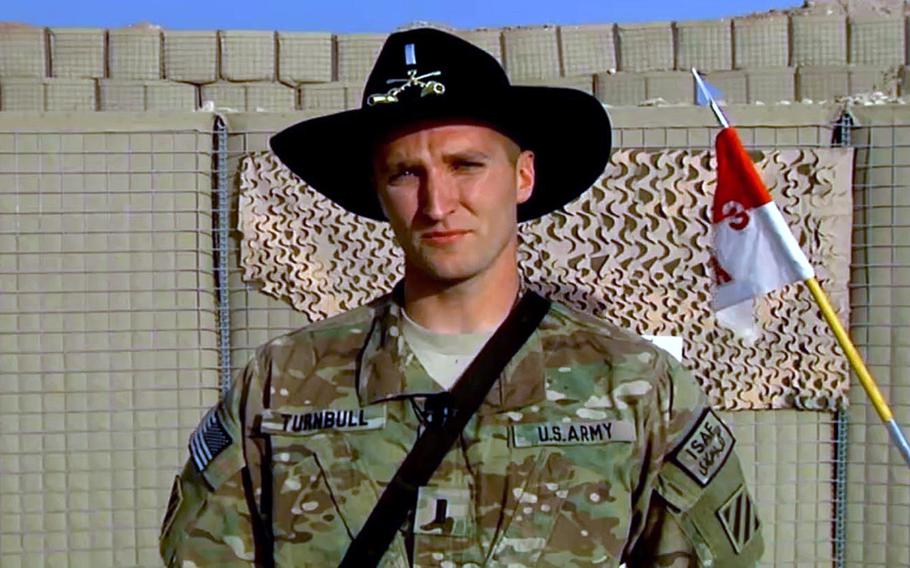 One of the three American troops wounded in a deadly bombing in Syria last month didn’t get to meet President Donald Trump during a hospital visit, but he did send him a message and may soon get a second chance at a meeting.

Capt. Jon Turnbull, 32, of Gaylord, Mich., was wounded in a Jan. 16 blast in the town of Manbij that left four Americans and dozens of others dead.

The flu forced him to cancel a planned visit with Trump at Walter Reed National Military Medical Center on Feb. 8, when the president came for his annual physical, the soldier’s wife said.

An aide shared with Trump a brief note Turnbull had written on a whiteboard — the four-letter initials for Trump’s campaign slogan, “Make America Great Again” — Turnbull’s wife said in a Facebook post published the day of the visit. The president responded approvingly.

“He laughed, and said ‘I like this guy!’” wrote Samantha Turnbull.

The following day, Trump also tweeted about the “outstanding” troops he met on his visit to the hospital.

“It was great meeting some of our outstanding young military personnel who were wounded in both Syria and Afghanistan,” Trump wrote. “Their wounds are deep but their spirit is sooo high. They will recover & be back very soon. America loves them. Walter Reed Hospital is AMAZING — Thank you all!”

Last month’s blast killed a Special Forces soldier, a Navy linguist, a former Navy SEAL from the Defense Intelligence Agency and a U.S. contractor. Though the Pentagon declined to identify the three wounded troops who survived, Turnbull’s family named him in the media and online.

Among his injuries were many shrapnel wounds, a broken pelvis and a fractured skull, family and friends said on social media. After being evacuated to Baghdad and Germany, he is recovering at Walter Reed and faces years of surgery for facial reconstruction.

His wife has said on Facebook that there are stitches where his right eye was removed and that she’s praying for a miracle with his left eye.

Samantha Turnbull declined to discuss her husband’s condition or the president’s visit with Stars and Stripes, but she has reported on his progress over the past few weeks in a series of largely positive Facebook posts asking for prayers and sharing glimpses of hope in his recovery. Despite his serious wounds, he’s “the same old Jon,” she posted.

Two other servicemembers wounded in the blast and recovering at the hospital have told her much about the events of that day, she said in a January post, calling them “literally my definition of super heroes” for helping save her husband’s life.

“How anyone survived this, I just don’t understand,” she wrote. “My heart aches, especially for them, that they had to be there, and have to go through this as well.”

Last week, Scott A. Wirtz, the former Navy SEAL killed in the attack, was buried near St. Louis, and the slain Navy linguist, Chief Petty Officer Shannon M. Kent, was memorialized at a ceremony in Annapolis on Friday, where she was posthumously promoted to senior chief. Earlier this week, the body of Chief Warrant Officer 2 Jonathan R. Farmer, the Green Beret killed in the blast, was returned home to Florida.

Trump has called for the withdrawal of some 2,000 U.S. troops from Syria, and U.S. military officials have reportedly begun preparations to pull out in the coming weeks. The plan has drawn criticism from both Republican and Democrat lawmakers and led to the resignation of Defense Secretary Jim Mattis.

In a photo Samantha Turnbull shared after Trump’s hospital visit, her husband had written a note asking if anyone had his phone number “or uncle Mattiss [sic],” apparently referring to the former defense secretary.

Though the Turnbulls had to cancel their visit with the president, one of the others wounded in the Manbij attack met with Trump and told him Jon Turnbull was his biggest supporter among the trio, her post said.

Trump now insists on seeing him, Samantha Turnbull said, and an aide assured her a visit is “in the works.” Trump also sent over an aide to give Jon Turnbull a presidential coin, making him smile, she said.

“The smile on Jon’s face ... was the greatest thing I have seen in a long time,” she wrote. “A President who cares about his troops ... is an amazing and wonderful thing.”