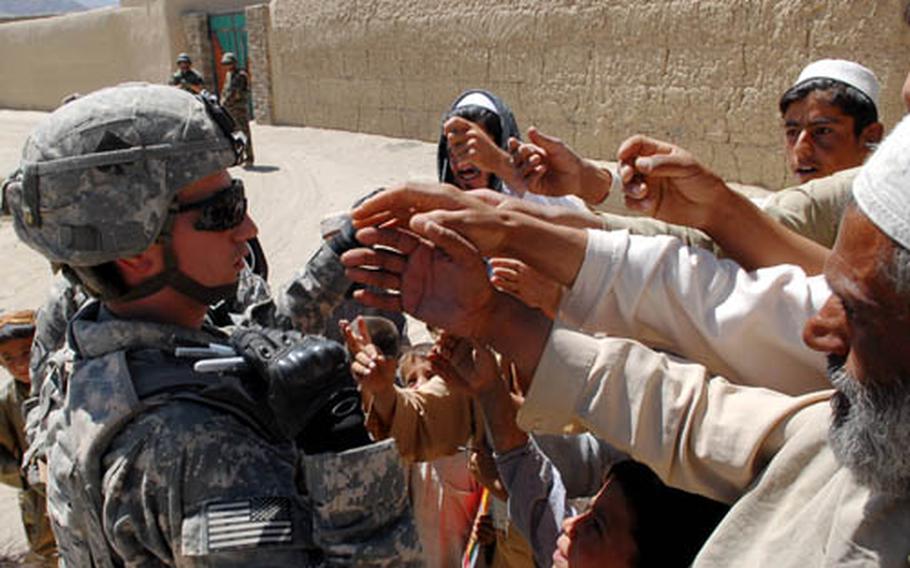 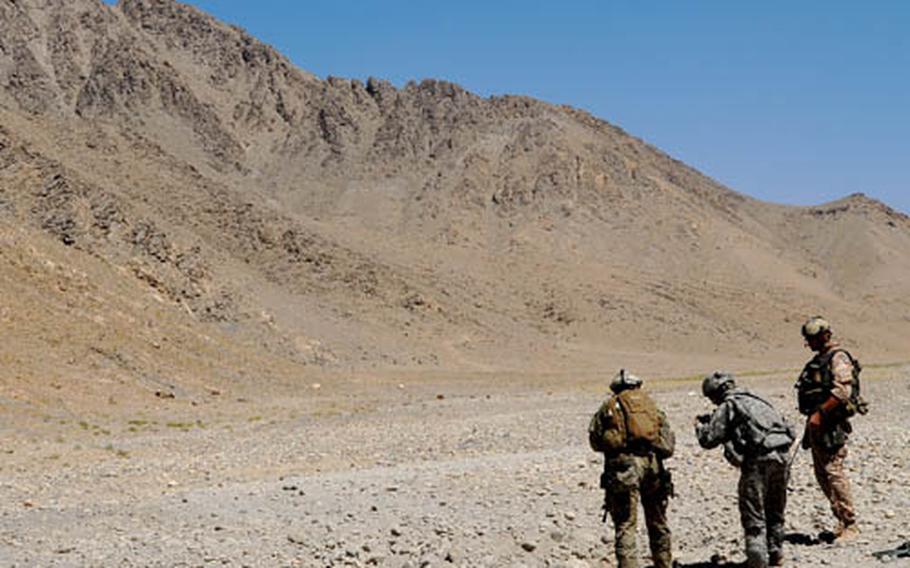 Lt. Richard Sposito and Czech soldiers inspect the site of an IED blast. No one was injured in the attack. (Michael Gisick / SnS) 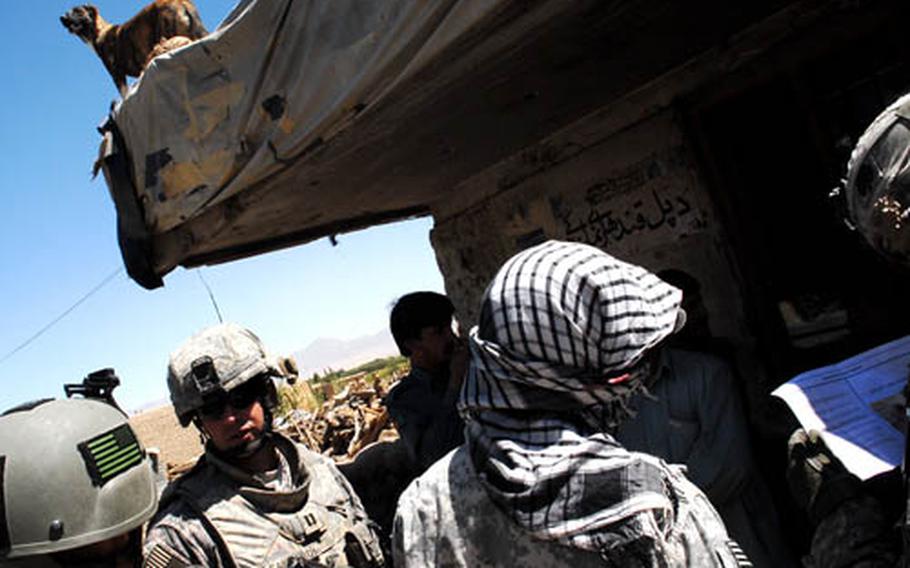 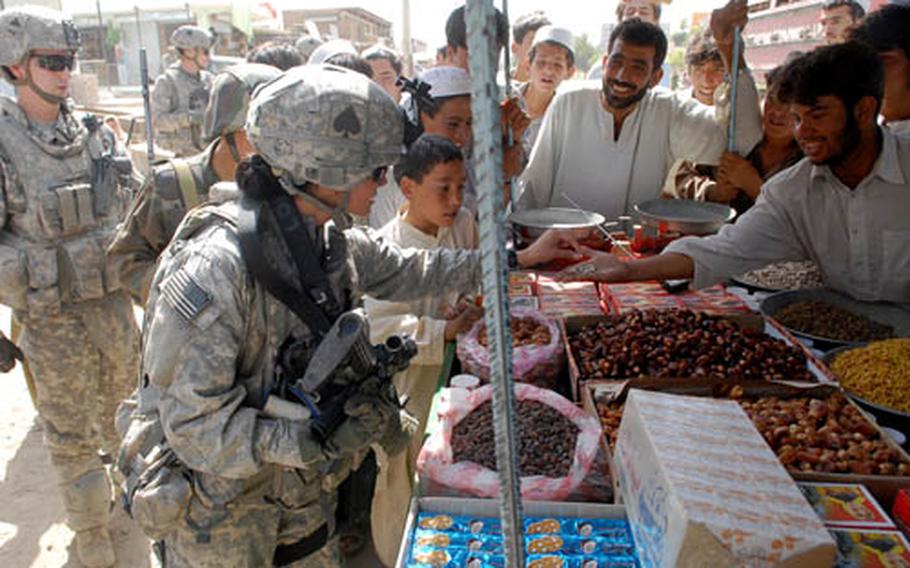 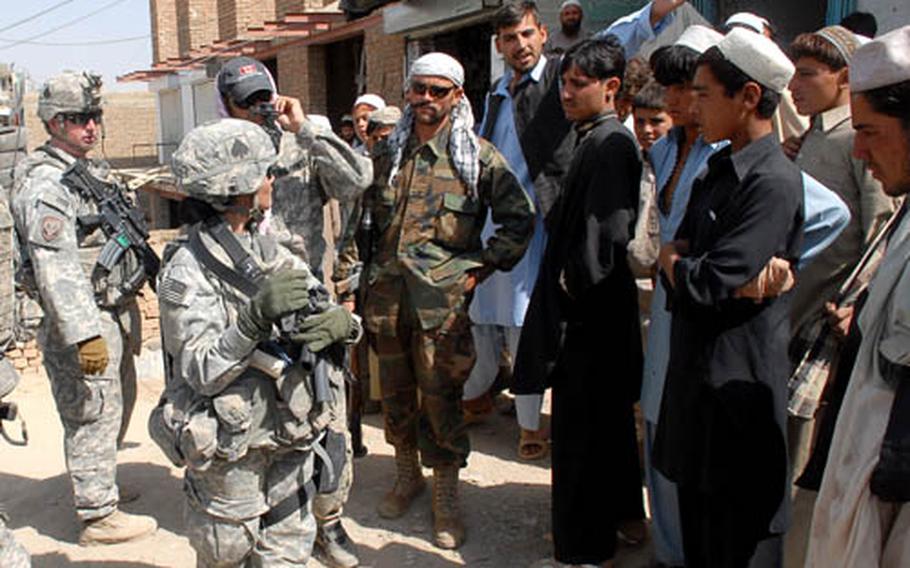 Sgt. Susana Lovko is stopped by a man on the street who begins asking her why security has gotten worse in Logar this year. (Michael Gisick / SnS)

LOGAR PROVINCE, Afghanistan &#8212; It had been two or three months since the U.S. platoon had visited the village at the north end of the province, backed up against the dry mountains that separate Logar from the outskirts of Kabul to the north. And this would be a short visit.

Second Lt. Richard Sposito, the 23-year-old platoon leader, hands out some toothbrushes, notebooks and pens to the children, trying to keep the presents out of the hands of the village&#8217;s older men.

The Afghan soldiers who accompanied the Americans, meanwhile, begin agitating to head home for afternoon prayers &#8212; it being the second day of Ramadan and already late morning, with a long bumpy drive ahead. So Sposito wraps it up with a few questions.

Everything is fine, the villagers respond. They are poor. They need jobs. But security, one offers, is "perfect."

A few minutes later, perhaps 5 kilometers down the bumpy road home, a bomb explodes underneath a truck in the middle of the American-led convoy. No one is seriously injured, but the blast is another sign of the times in Logar.

It is hardly the most violent province in Afghanistan &#8212; U.S. commanders see it mainly as a staging ground for insurgent attacks on the capital.

Probably because they have bigger ambitions, officers say, the insurgents prefer to keep a relatively low profile within Logar, shying away from direct confrontation with the Americans.

But if the insurgency operates at a relatively low level within the province, then so do the Americans, whose tactics are defined by the limitations of their force as by anything else.

And aside from a Czech reconstruction team and a handful of French soldiers who work with the Afghan army, they are the only coalition presence in the area.

It is "not even close" to enough troops, says Capt. Boe Faircloth, who commands the headquarters company that includes the MP Platoon, part of the 4th Brigade Combat Team, 101st Airborne Division.

Faircloth says it would take at least four platoons to secure the northern part of the province, but the brigade is spread thin across a vast area that stretches southeast from Logar to the restive border with Pakistan.

"We try to establish a presence and gather intelligence," Faircloth says.

"We try to spread the message to the people to support their Afghan forces, because we can&#8217;t do it all. We tell people to call them."

Sgt. Susana Lovko is one of the platoon&#8217;s medics, but as they move through a market along the main road one morning, the first day of Ramadan, she&#8217;s at the front of the patrol, extending a hand to the bearded old men, striking up conversations. She&#8217;s just about the only woman on the street, and the rest are wearing burqas.

She stops at a small bookstore, asking whether they have any texts for children trying to learn Pashto. She stops at a fruit stall and buys some grapes. "Tashakor," she says, Pashto for "thank you."

Sposito drops in at a few shops, trying to spread the message.

"We know there are some bad guys out in Baraki-Barak," he tells one shop owner who hails from that village. "If [you] hear anything or see anything, just please let us know, so that way we can try to help support you."

Nobody is talking, which, Sposito says, is understandable.

"They&#8217;re at the point where they have to be careful what they say and what they put out," he says.

In some ways, the sense of deteriorating security here is a result of the arrival of the Americans. In a bid to disrupt an escalating series of rocket attacks and suicide bombing in Kabul, a platoon from the 82d Airborne arrived in northern Logar over the winter. Sposito&#8217;s platoon replaced them in the spring.

Before that, there were no Americans to challenge the insurgents.

But now, a man who approaches Lovko says after the soldiers have moved on, people feel caught in the middle of a war that no one seems to be winning.

The Taliban pressures us for support, the man says, and so do the Americans. Both have guns.

"The people are afraid of the Taliban, and they are also afraid of you people," he says.

Asked which side he hopes will win, the man, who gives his name as Abdullah, just shrugs.

It&#8217;s an ambivalence that the American troops find frustrating, even if some say it is understandable.

Faircloth says he has not received a single report of the Taliban doing anything positive &#8212; building a single school, providing a single meal. Yet still, he says, there&#8217;s this apathy.

Even if there were a whole American brigade in Logar, Faircloth thinks it would be slow going.

"You can go up to somebody and lay out the whole IED (improvised explosive device) that you just found in his neighbor&#8217;s house, and he&#8217;ll still insist that his neighbor is a good guy," he says.

But then, you can&#8217;t just let a bunch of terrorists take over the country again, Faircloth muses.

Others are more optimistic.

"I think people definitely want the government to succeed," Sposito says. "I think 85, 90 percent of the people support what we&#8217;re trying to do. But people are afraid."

After the roadside bomb on the second day of Ramadan, the patrol hooks up the damaged vehicle to another truck and pushes on south.

They get stuck in the next village when one of the Humvees has a mechanical issue.

The Afghan soldiers decamp to the shade of an orchard, the time for prayers having come and gone.

Villagers gather by the side of the road, impassively watching the Americans work.

The soldiers who have stayed in their trucks watch back, but everyone seems tired. No one has eaten.

But, nobody got hurt. Staring out the window of his Humvee, one soldier offers a benediction to the faces by the side of the road.