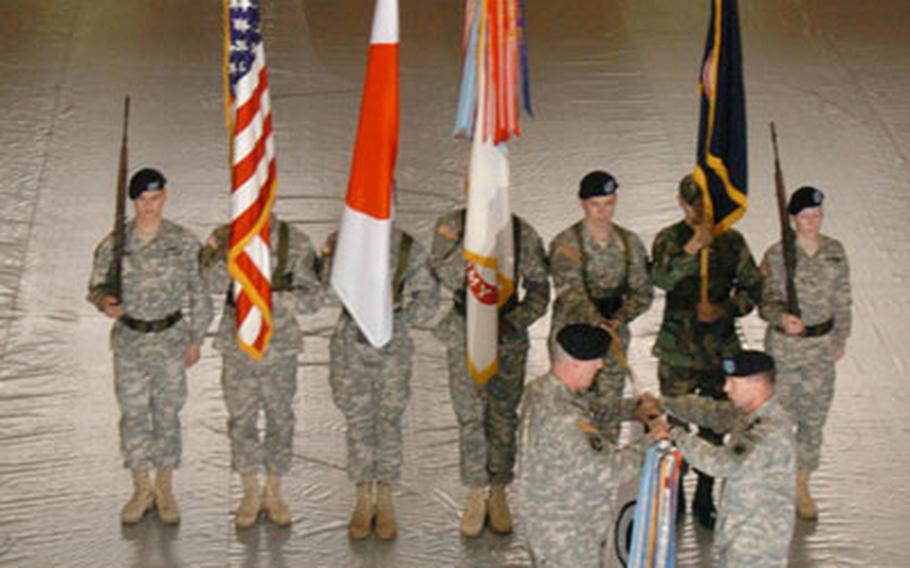 Lt. General Charles H. Jacoby (cq), I Corps commander, unfurls a flag with Command Sgt. Maj. Frank A. Grippe (cq) during a ceremony welcoming the I corps to Camp Zama, Japan, on Wednesday. I Corps from Fort Lewis, Wash., moved its forward headquarters element to Camp Zama; the transition team is the first step toward the implementation of a modernized U.S. Army command and control capability in Japan, officials said. (Christopher B. Stoltz / S&S)

CAMP ZAMA, Japan &#8212; A big piece of the U.S. military&#8217;s realignment puzzle in Japan fell into place Wednesday as the I Corps forward headquarters was formally established here during a ceremony in the Yano Fitness Center.

The new forward-deployed element provides I Corps at Fort Lewis, Wash., with a modernized command platform allowing it to deploy more rapidly and effectively for the defense of Japan and other Far East contingencies, officials say.

During remarks, Lt. Gen. Charles H. Jacoby, the I Corps commander, called it a significant moment in the history of the unit and U.S. Army in Japan, adding that the two nations have been &#8220;partners in peace for over 50 years.&#8221;

&#8220;This is an important milestone in the continued development between 1st Corps and the Japanese Ground Self-Defense Force,&#8221; he said. &#8220;It will serve the mutual security interests of our two great countries.&#8221;

In an interview with Stars and Stripes after the ceremony, Jacoby said establishing an I Corps forward element will lead to even more cooperation and coordination.

It&#8217;s also a critical facet in transformation plans set forth by the U.S. and Japan, he said.

An estimated 200 Japanese protesters marched past Zama&#8217;s main gate and demonstrated in a nearby park as Wednesday&#8217;s activation took place.

I Corps has conducted frequent exercises with the JGSDF, including Yama Sakura, which ended Sunday in Sendai.

Jacoby says this is merely the continuation of a longtime relationship, and the two sides will now work together on a routine basis.

&#8220;This represents a maturing between the Army and Japanese Ground Self-Defense Force. &#8230; You can expect greater efficiency in the way we plan and train together.&#8221;

To some extent, it&#8217;s a matter of soldiers changing patches and switching their classification from U.S. Army Japan to I Corps.

&#8220;We&#8217;re developing an operational capability here that&#8217;s truly different than the administrative capability found here in the past,&#8221; he said Wednesday, adding that the move has significant meaning for the alliance and was a shared objective. &#8220;It&#8217;s time to move from administrative to operational.&#8221;

He could not say how many extra soldiers would come to Zama but added, &#8220;The numbers we increase are in double digits, not triple digits.&#8221;

Officials said U.S. Army Japan remains the command authority for soldiers at Zama and Torii Station, Okinawa. But both posts can support I Corps during exercises and other regional missions, just as they have in the past.

Zama has gotten an influx of Humvees to accommodate possible deployments, according to Maj. Jim Crawford, a U.S. Army Japan spokesman. He declined to say how many.

He said the installation also is receiving communications equipment to support the shift toward a modernized tactical headquarters.

A battle simulation center will be built at Sagami Depot, but ground hasn&#8217;t been broken yet and no time line is set, Crawford added. The facility will allow computer war games to be played out.