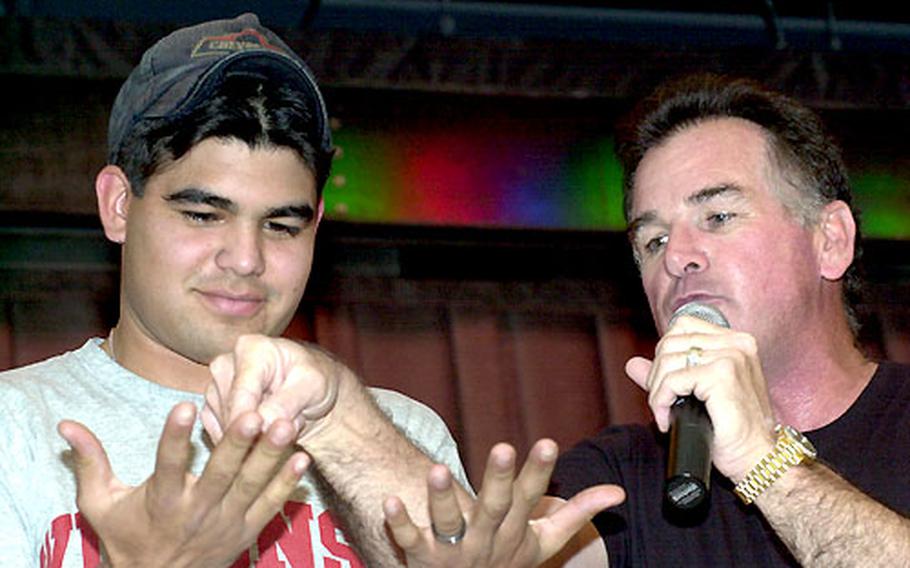 Hypnotized sailors were told the only way to cool off was to roll up their pant legs and churn their hands round and round. (Jennifer H. Svan / S&S)

On stage at the Mutsu Officers Club, eight of their friends fell under the spell of professional hypnotist Chuck Milligan.

Their behavior ranged from bizarre to goofy.

Petty Officer 3rd Class Sean Monahan didn&#8217;t seem to mind wearing a rubber ducky floatation ring around his waist, hollering at the audience to get out of his swimming pool every time Milligan uttered &#8220;water.&#8221;

And, upon cue, Navy Airman Emily Worcester struck the floor violently with a plastic bat trying to kill imaginary cockroaches.

Of the 16 sailors who volunteered to sit on stage, only eight fell into a hypnotic trance. Milligan said not everyone would be hypnotized. Some people can&#8217;t relax and get caught up in analyzing whether hypnosis is working. Others are so physically tired that while hypnosis works on them, they sleep through the whole program, Milligan said. And some people just fall into a light trance, he added.

In a deep, soothing voice, Milligan made the sailors fall asleep and wake up upon command; some fell flat on their face to the floor. Milligan played tricks on their sleepy minds, at one point telling them they were &#8220;butt naked.&#8221; The audience hollered with delight as the sailors squirmed in their chairs and tried to cover up.

Milligan has performed for sailors in Japan for 12 years. This was his first visit to Misawa. In the States, where he lives in San Diego, Milligan does shows for college students. A former San Diego police officer, he&#8217;s been a professional hypnotist for 18 years, he said.

&#8220;It was supposed to be a party trick and I got very good at it,&#8221; he said, noting that he went to school to become a therapist, and learned to use hypnosis as a therapy tool.

Worcester, who not only went after fantasy cockroaches but also danced and sang like Britney Spears, incredulously recalled the evening.