Huskies a hit at Hohenfels 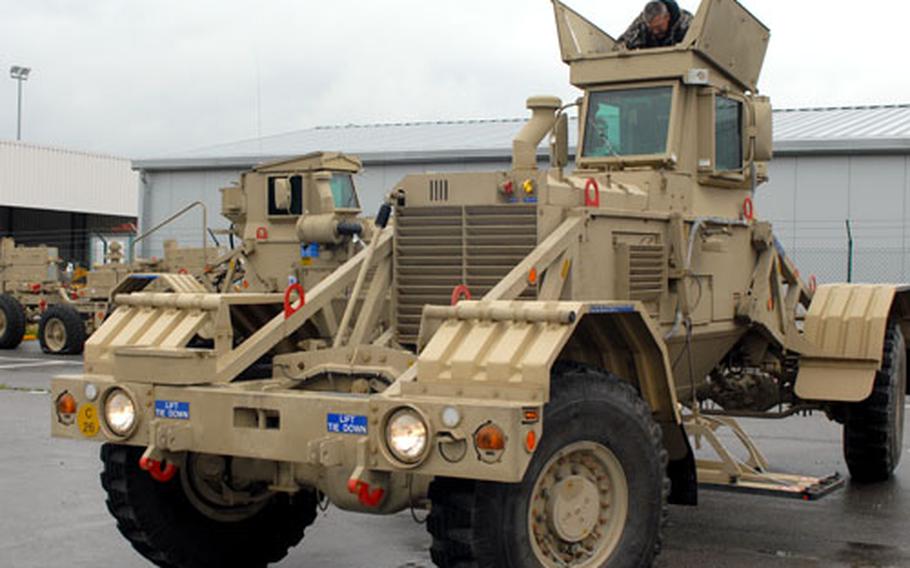 The vehicles, which fire electrical pulses to detect metal in buried mines or roadside bombs, will be used to prepare engineers for duty in Iraq and Afghanistan, where the vehicles are widely used. The new arrivals at the readiness center are the first based in Europe, according to Maj. Damon Knarr, who helps train engineers at Hohenfels.

Engineers at the center for pre-deployment exercises will use the Huskies to practice route-clearance missions and will learn how to maintain the machines, he said.

The vehicles at Hohenfels include spare-wheel modules that enable mechanics to quickly replace the front or rear of the vehicle if it is damaged by a roadside bomb, he said.

There&#8217;s also a trailer that can be dragged behind a Husky to make sure it hasn&#8217;t missed a mine. The trailer will detonate any undiscovered mines and is likely only to sustain a damaged wheel that can be easily replaced if it&#8217;s hit, said Hanna, who worked with Huskies as a soldier in Iraq from 2005 to 2006.

"They have four-wheel steering and an automatic fire extinguisher," he said. "The tire pressure can be adjusted from the cab, which can be handy for getting traction off-road."

Arroyo said his unit found a "daisy chain" roadside bomb of 155mm artillery rounds and a large weapons cache in Mosul in 2005 using the vehicle.

But he said he prefers other engineer route clearance vehicles such as the RG-31 &#8212; a heavily armored vehicle with good visibility &#8212; or the Buffalo, which features a robotic arm that engineers use to investigate possible roadside bombs.

"Some people like oranges and some like apples," Arroyo said. "I have a better view from the RG-31, and in the Buffalo I can use the (robotic) arm. Personally, I use my eyes more. After you get to know what you are looking for, and once you get to know an area, it is easy to spot what they (insurgents) do. When you move to another area, it is a different story and on the open road the Husky would be a primary means of detecting IEDs (improvised explosive devices)."

Another member of the 541st, Sgt. Harold Keiser, 26, of Phoenix, worked with the Husky for the first time at Hohenfels on Tuesday.

Keiser, a mechanic, said he likes that a Husky can be repaired on the spot after it is hit by a roadside bomb.

"In two hours it can be fixed and ready to roll again," he said.

The 541st doesn&#8217;t have any Huskies in Germany but Keiser said he expects to fall in on the vehicles when the unit arrives in Iraq later this year.