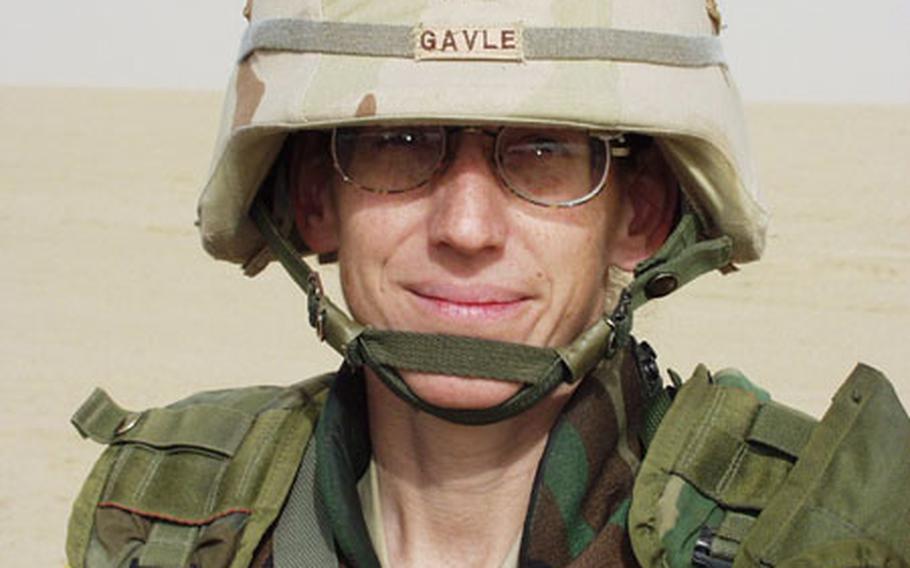 UDAIRI RANGE, Kuwait &#8212; Lots of soldiers serving in Kuwait over the holidays would probably like to know exactly where their spouses are at any given moment.

Maj. Brad Gavle can find out with pinpoint accuracy.

Inside the vehicle, Gavle can locate all of the leader vehicles on the Udairi training range, a vast expanse of featureless desert some eight miles east of the Iraq border.

His wife, Maj. Kathy Gavle, was working as an intelligence officer on another leader vehicle.

The Kuwait deployment is the couple&#8217;s first together since they were married five years ago. They now work closely as part of the staff team for the 3rd Infantry Division, which is participating in Operation Desert Spring, the coalition defense of Kuwait. They met while training in Hohenfels, Germany, and were married shortly afterward.

On this deployment, however, the Gavles left their 3-year-old daughter, Erin, at home with family. When Erin was a baby, Kathy Gavle, 38, served a year in Bosnia and Herzegovina and was gone during the holidays as well.

They know they&#8217;re not alone in their sacrifice. Dozens of active-duty couples with children have to deploy on a regular basis and plenty of soldiers, sailors, airmen and Marines are away from their families for the holidays.

Since the Gavles are part of a headquarters unit, they are unsure how long they will be in Kuwait. Kathy Gavle said her primary effort is focusing on work.

They taught Erin the song when she was 2 years old.