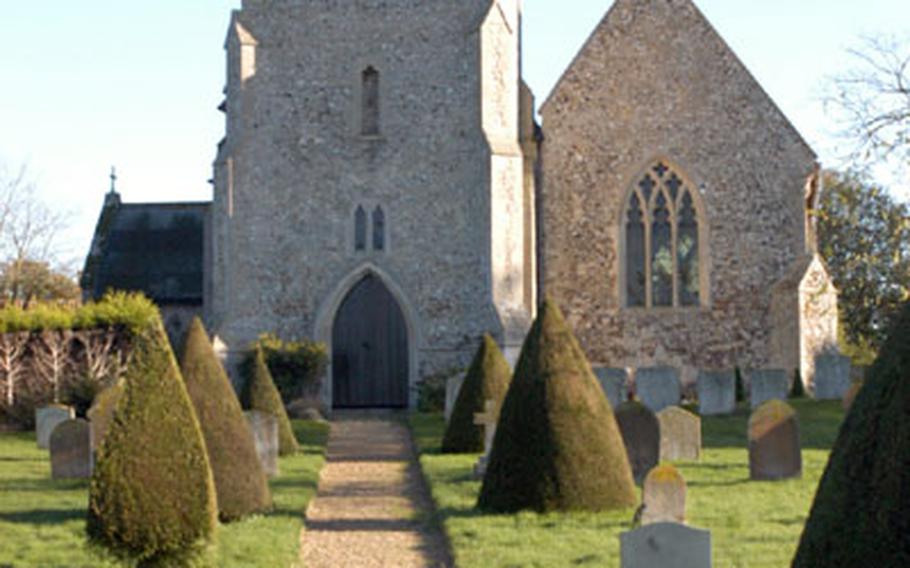 Lt. Col. Constance Huff and husband Peter Petty learned to ring the bells at the church of St. Lawrence — the bell tower is seen above — as a way to get involved in the community. (Ben Murray / S&S)

Lt. Col. Constance Huff and husband Peter Petty learned to ring the bells at the church of St. Lawrence — the bell tower is seen above — as a way to get involved in the community. (Ben Murray / S&S) 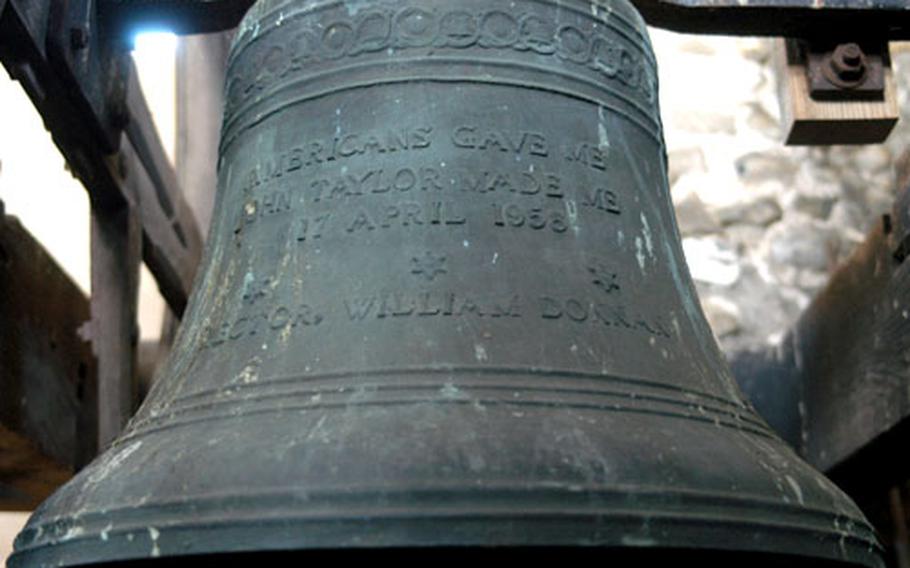 One of the bells donated in 1958 to the church of St. Lawrence in Eriswell bears the inscription “Americans gave me, John Taylor made me.” The name of the rector at the time, William Donnan, appears below. (Ben Murray / S&S) 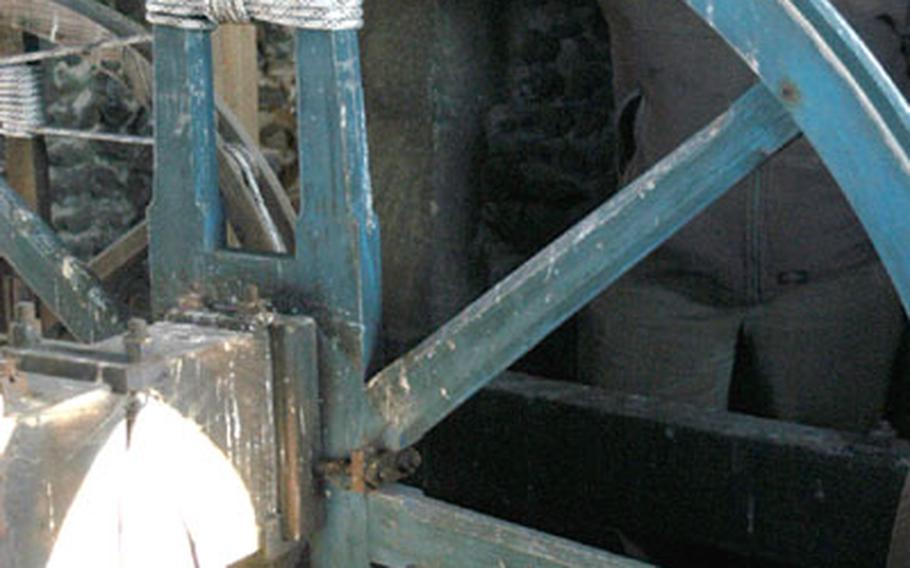 Church warden Michael Brunning stands in the belfry next to the tower&#39;s biggest bell, the tenor or "number five" bell. Church bells are normally numbered highest to lowest, with one being the lightest. (Ben Murray / S&S) 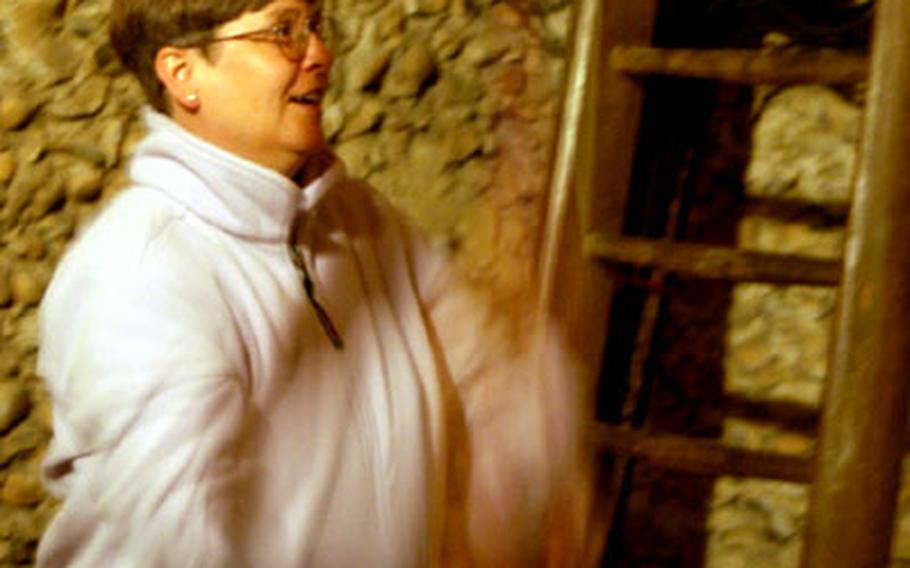 Lt. Col. Constance Huff draws her hands downward in a swift pull on the “sally,” or padded hand grip ringers use to grab the rope and toll a church bell. (Ben Murray / S&S)

ERISWELL &#8212; Ask Peter Petty and Lt. Col. Constance Huff to give you a ring, and you might get more than you bargained for.

To the married couple from this little village tucked between RAF Lakenheath and RAF Mildenhall, a &#8220;ring&#8221; involves rigorous physical activity, loud music and swinging hunks of heavy metal.

It&#8217;s church bells ringing, and you probably know the melody.

The pealing of the local church bells piqued the interest of the pair when they arrived here in 2001, when Huff was assigned to be chief of pediatric dentistry for the 48th Dental Squadron.

Looking for a way to get involved in the local community, Petty and Huff inquired at the town&#8217;s 1,000-year-old church of St. Lawrence about giving the bells a try, and soon found themselves among a small number of Americans who have learned the craft.

To ring a set of church bells requires a group of people, often referred to as a band, with each person manning a single rope due to the size and weight of church bells.

To start a bell ringing, a band member first turns the bell completely upside down to a position where it can rest against a wooden bar called a &#8220;stay.&#8221; The result looks harmless from the bottom &#8212; just a set of ropes hanging motionless in the ringing chamber.

But it takes just a slight tug on the cord to set an upside-down bell in motion, and when several hundred pounds of metal start swinging back and forth, violent-looking things begin to happen.

Huff was explaining as much recently when suddenly, after just an easy downward pull on the line in front of her, the rope in her hands rocketed straight up through the ceiling through a three-inch hole, yanked powerfully upward as her bell made its first 360-degree swing. Bong!

&#8220;If you&#8217;re holding on to the rope at the wrong time, it can pull you off your feet,&#8221; she said. And church bells get much more formidable than Eriswell&#8217;s mini set. In some of England&#8217;s bigger churches, they can weigh as much as a compact automobile, said Ruth Ogden, a veteran ringer who tutors Petty and Huff.

But aside from the physical challenges of church bell ringing, Petty and Huff stress that the biggest benefit of joining the local band is how quickly and deeply Americans can get involved in their local community.

In Eriswell, the connection also runs one level deeper. Bell ringing also has acted as a link between local British civilians and the Air Force, which donated two of the church&#8217;s bells in 1958.

And anyone can learn, Odgen said. A little bit of timing and coordination, an ability to remember simple sequences of numbers and an appetite for practice are all it takes.

Change &#8212; A pattern of ringing each bell in the tower once in a specific order.

Clapper &#8212; The arm in the center of the bell that makes the noise.

Soundbow &#8212; The widest part of the bell at the bottom, where the clapper strikes.