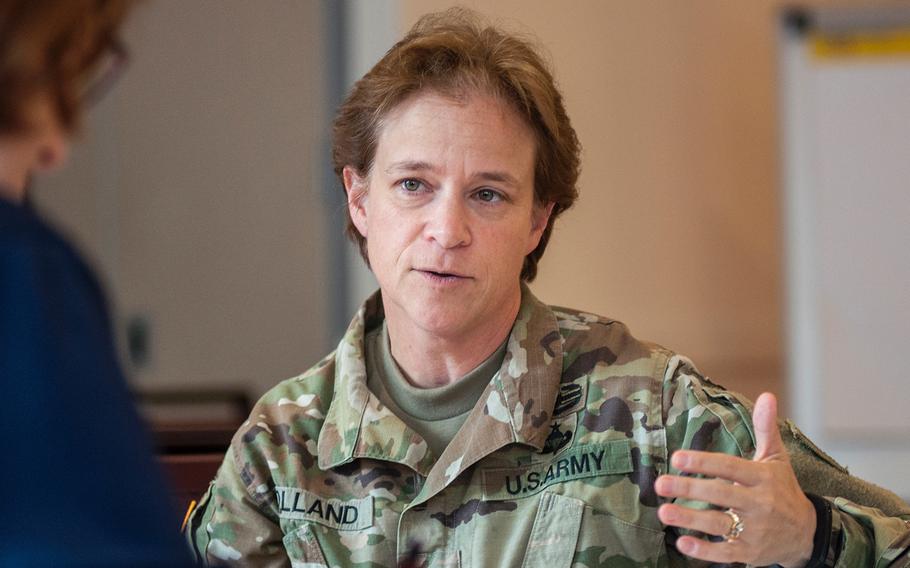 Buy Photo
Brig. Gen. Diana Holland explains how the Army Corps of Engineers is backing the Federal Emergency Management Agency in its recovery efforts in Puerto Rico on Nov. 10, 2017, nearly two months after Hurricane Maria devastated the island. “There is a long way to go,” Holland said of the recovery efforts on Wednesday Dec. 20, 2017. (Carlos Bongioanni/Stars and Stripes)

Buy Photo
Brig. Gen. Diana Holland explains how the Army Corps of Engineers is backing the Federal Emergency Management Agency in its recovery efforts in Puerto Rico on Nov. 10, 2017, nearly two months after Hurricane Maria devastated the island. “There is a long way to go,” Holland said of the recovery efforts on Wednesday Dec. 20, 2017. (Carlos Bongioanni/Stars and Stripes) 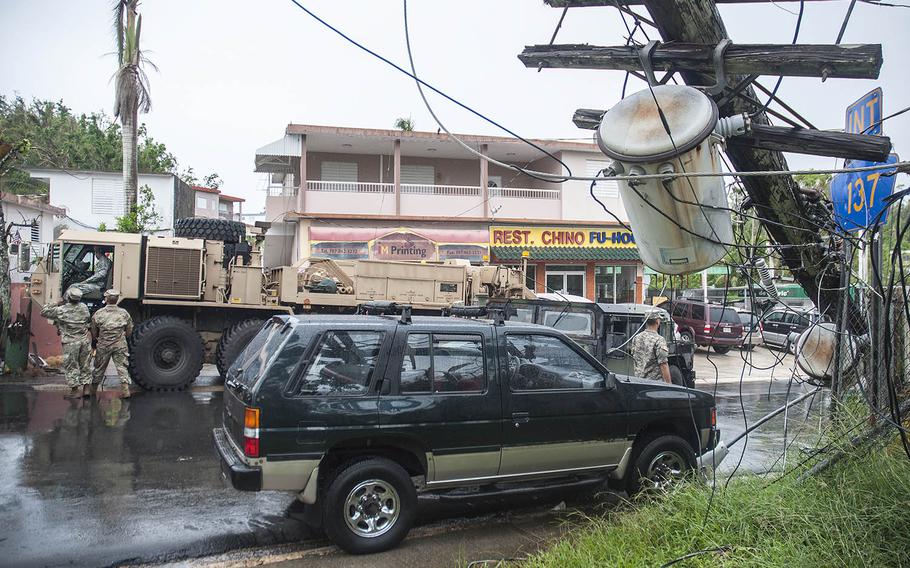 Buy Photo
Many power lines, blown over by the fierce winds of Hurricane Maria in September, remain down like this one outside the Jamie A. Collaza High School in Morovis, Puerto Rico, where a convoy of military transport vehicles personnel arrived Tuesday, Nov. 7, 2017, during a food and water humanitarian distribution event. (Carlos Bongioanni/Stars and Stripes)

WASHINGTON — The U.S. Army Corps of Engineers has thousands of staff and contractors repairing the electrical grid in Puerto Rico. But three months after Hurricane Maria, one-third of the electric service has yet to be restored, and it’s going to be many more months before the most remote households in the mountainous interior of the island have power, the command said Wednesday.

“There is a long way to go,” said Brig. Gen. Diana Holland, the commander in charge of the Army Corps’ hurricane recovery mission on the U.S. territory.

Holland assessed the Army Corps, working alongside the Puerto Rico Electric Power Authority, or PREPA, could have power restored to 95 percent of the island by late February/early March. But that last five percent – “the folks at the end of the line in remote areas” – could take until May, she said.

“It’s a human problem and for us, every day that goes by that they don’t get lights on, every day that goes by that we don’t have a blue (temporary) roof, just motivates us to keep going because we know there’s a family that isn’t back to normal, that hasn’t had their lives restored,” Holland said from San Juan during a teleconference with reporters.

Based on peak output numbers, the Puerto Rican government estimates 65 percent of the power grid has been restored since Sept. 20 when Maria slammed into the island head-on with 150 mile per hour winds and damaging rain. But while PREPA is able to measure how much electricity it is now generating, the storm destroyed the authority’s ability to measure how many homes are receiving that power, said Col. John Lloyd, the Army Corps commander in charge of the power restoration mission.

“They have not been able to get their system back on line to measure customer count,” he said.

The teleconference came ahead of the Christmas holiday, but also on the same day that Congress passed a controversial tax reform bill that Puerto Rico Gov. Ricardo Rossello warned had “completely sidestepped” the island’s flagging economy by taxing U.S. companies based in Puerto Rico as if they are operating in a foreign jurisdiction.

The conference also followed on the heels of a visit to the island by Department of Homeland Security Secretary Kirstjen Nielsen and Department of Housing and Urban Development Secretary Ben Carson on Tuesday. Carson was quoted by CNN as telling reporters in San Juan that he was impressed with the progress that’s been made and found the situation “better than what I had heard.”

But the cabinet secretaries did not go out of San Juan during the visit or see the hardest-hit and hardest-to-reach areas that are still struggling.

Helping to bolster its work restoring the power grid, the Army Corps has also been installing large generators to get power plants, hospitals, water treatment plants and other vital facilities up and running more quickly and to stabilize a power grid that was outdated and in some areas failing even before the storm.

To date, Army Corps has installed an unprecedented 870 generators in Puerto Rico since the disaster – more than installed after hurricanes Sandy, Rita and Katrina combined, Holland said. It expects to install another 400. As a point of comparison, the agency installed 50 generators following Hurricane Irma’s strike in Florida in early September, she said.

The Army Corps is also working on other aspects of the island’s recovery. It has collected some 1.4 million cubic yards of debris, which is slightly more than one-third of what is estimated, and it has installed some 23,000 temporary tarps on homes, known as blue roofs, just less than one-third of the some 75,000 that are needed.

It’s a long haul, but Holland promised the Army Corps would stay to finish the job.