This Black Hawk helicopter assigned to Company B, 5th Battalion, 159th Aviation Regiment was flipped when the clamshell structure it was housed in at Aviano Air Base was destroyed by strong winds Thursday afternoon. The tail section was broken and much of the rotor section was damaged. (Kent Harris / S&S)

This Black Hawk helicopter assigned to Company B, 5th Battalion, 159th Aviation Regiment was flipped when the clamshell structure it was housed in at Aviano Air Base was destroyed by strong winds Thursday afternoon. The tail section was broken and much of the rotor section was damaged. (Kent Harris / S&S) 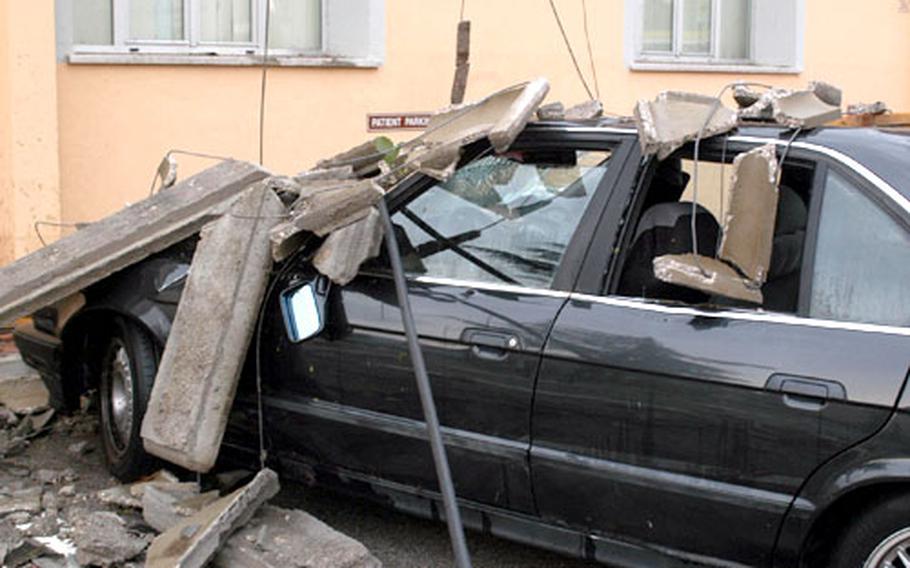 Several cars parked next to the Health and Wellness Center at Aviano Air Base were essentially totaled Thursday as strong winds collapsed part of the building&#39;s roof and spread debris all around. (Kent Harris / S&S) A wind-swept tree collapsed on the car port next to the Health and Wellness Center on Aviano Air Base on Thursday. The structure gave way, damaging the cars underneath it. (Kent Harris / S&S) 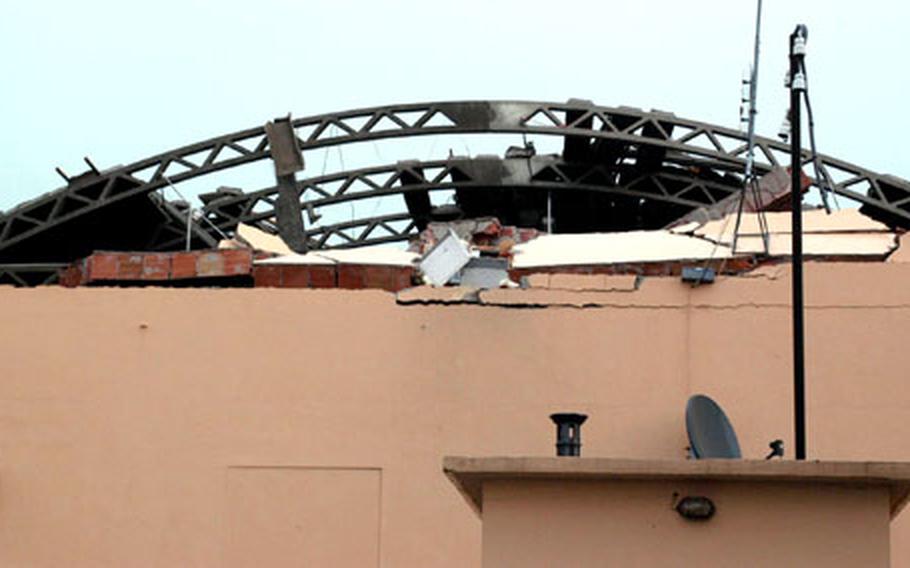 The damaged roof of the Health and Wellness Center at Aviano Air Base. (Kent Harris / S&S) 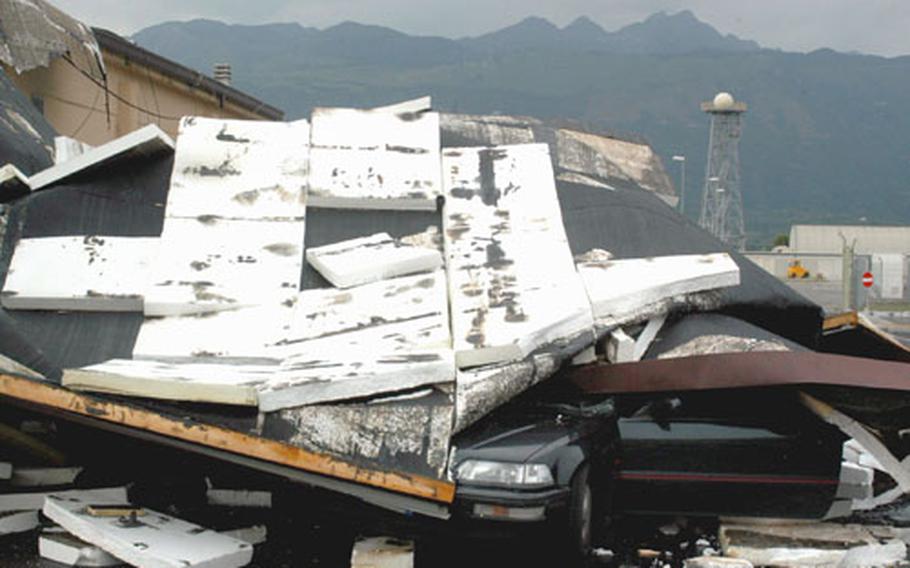 A carport attached to Building 907 on Aviano Air Base collapsed under strong winds Thursday afternoon and fell on the cars parked underneath it. (Kent Harris / S&S)

Part of the roof of the Health and Wellness Center collapsed, injuring at least three people inside. A Black Hawk helicopter assigned to Company B, 5th Battalion, 159th Aviation Regiment, flipped over when the clamshell building it was in collapsed. The tail section was broken and much of the rotor mechanism destroyed.

More than a dozen trees were torn from their roots across the base and even more cars suffered various degrees of damage.

Tech Sgt. Jerome Baysmore from the wing&#8217;s public affairs office said nine injuries were reported, none life-threatening. Apparently, none of the wing&#8217;s F-16s suffered any damage. C-130s from the 86th Airlift Wing from Ramstein, Germany, on hand to participate in training drops with the 173rd Airborne Brigade, appeared to be OK on the runway as well.

Asked Thursday about the scope of damage, Col. Roberto Sardo, the Italian base commander, said it was too early to tell.

Gary LaGassey, a recently retired colonel who&#8217;s an institution at the base, said he had never experienced such winds at Aviano before.

Baysmore said the base&#8217;s weather equipment measured gusts up to 82 knots before the power went out. He said the wing had no record of such heavy winds at Aviano.

The day started off like any other from the past week &#8212; hot and humid. But clouds started rolling in after lunch and the wind picked up, followed by spurts of heavy rain. People running errands huddled inside or braved the stiff winds to get to their cars.

Senior Airman Levi Hollandsworth was waiting for the bank to open up and decided to kill time at the nearby HAWC.

But he felt safe inside the building. Until part of the roof collapsed, sending debris everywhere.

A few people running for cover were struck by debris and treated by those inside until help arrived.

Staff Sgt. Kyle Grantham was teaching a class inside the building. He said signs of heavy winds were evident outside the windows, but the building initially weathered the storm. That suddenly changed.

Several cars outside the HAWC were pelted with debris from the roof and heavily damaged. Other vehicles were damaged elsewhere around the base as trees collapsed on them. Crews quickly cleared away trees strewn across roads, leaving others for later.

Other roofs around the base showed damage. A carport attached to Building 907, on the other side of the runway from the HAWC, collapsed on the cars beneath it and a Styrofoam-like substance in it was strewn for blocks around.

Two other of the large, tent-like buildings on the Army part of the base were damaged, but the one the helicopter was in was destroyed.

Army personnel on the scene declined to be interviewed or discuss the damage to the helicopter.

Power was out to most of the base as evening approached, though the sun was back and the mugginess returned as if nothing out of the ordinary had happened.