Hurdles take a bite out of Barracudas 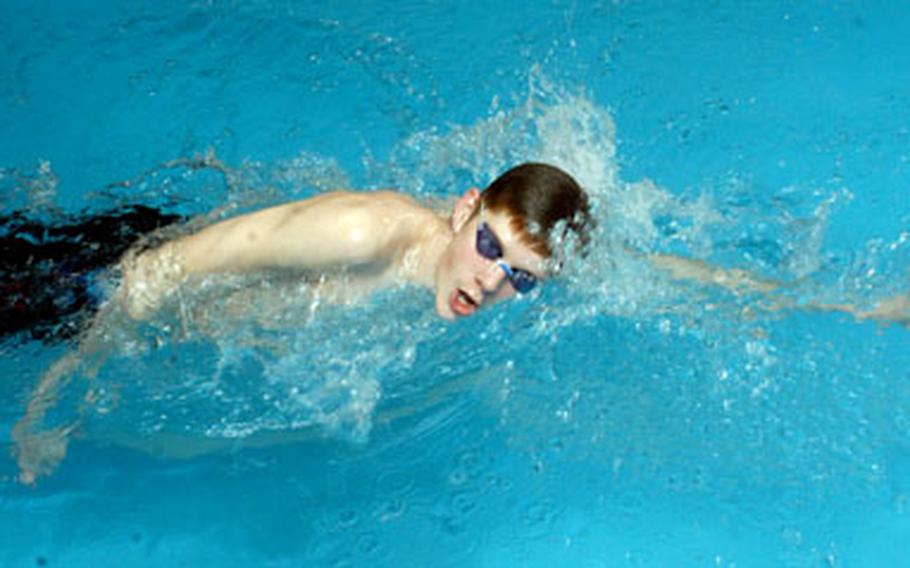 RAF HONINGTON &#8212; For a pointed, no-nonsense assessment of how Lakenheath Barracudas&#8217; season is going just weeks before the European Forces Swim League championships, it&#8217;s perhaps the youngest swimmers who put it best.

Everyone&#8217;s working on qualifying for the big meet in their best events, but there&#8217;s little illusion of the team taking home a title, he said.

That&#8217;s the goal for the Barracudas as they approach the end of the season of growth for the young, 40-member team, said head coach Cathy Wenner.

Many of the swimmers on this year&#8217;s team are young or in their first year on a competitive squad, and many have spent the season hammering out the basics at the team&#8217;s surrogate home at RAF Honington, a British air base.

To date, the squad has won both its home contests but hasn&#8217;t brought a title back from meets in mainland Europe this season, said veteran team member and assistant coach Konrad Korth.

Though the numbers in the win/loss column aren&#8217;t the team&#8217;s focus this year, coaches said, they are directly related to the unusually challenging circumstances that the team has to contend with.

Because swimming is not a Department of Defense Dependents Schools-supported sport in Europe, teams don&#8217;t have school backing and operate on a club basis, with parents chipping in dues to run teams and paying their own travel expenses.

While that&#8217;s the case for all teams in the European Forces Swim League, the Barracudas have an extra hardship in that RAF Lakenheath, the team&#8217;s namesake, doesn&#8217;t even have a pool.

The local facility has been closed since the base shut it down several years ago for repairs and never reopened it, Korth said.

As a result, the team practices on a British RAF base about a 40-minute drive from Lakenheath, in a four-lane pool housed in a drab little Quonset hut.

Coaches said they are grateful for the free use of the pool, but the situation has cut dramatically into the team&#8217;s roster, reducing it by about half in the years since it left Lakenheath.

The lack of DODDS support and the remote practice location have further marginalized an already little-recognized sport, adding especially to the decimation of ranks in the higher age categories, Korth said.

The circumstances require an extra measure of dedication from both swimmers and their parents to make several practices a week at Honington, some said.

Still, most swimmers don&#8217;t mind the commute to practice or the anonymity &#8212; they just want to be in the pool, several said.

Ryan Marso, 15, a swimmer with 11 years experience, shrugged off the difficulties of being a Barracuda.