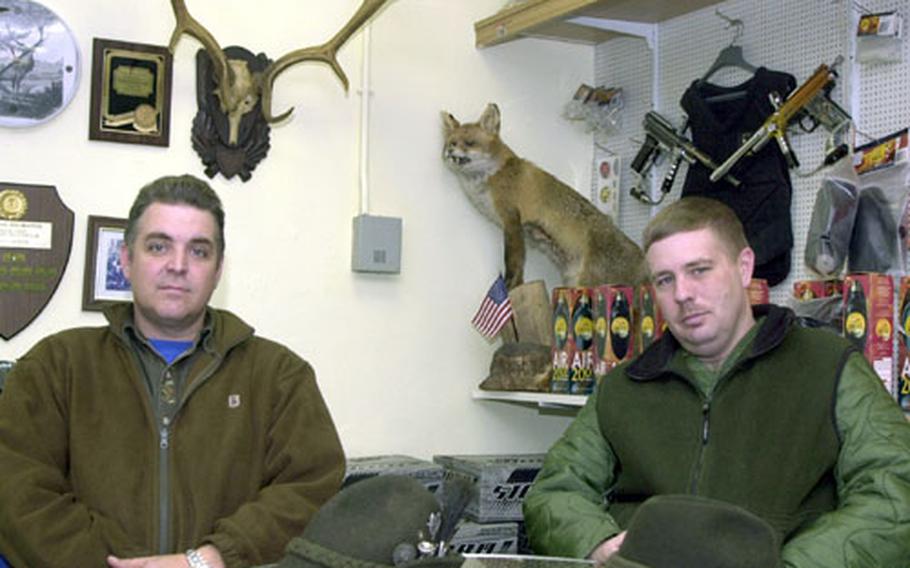 Myths about how it’s impossible for Americans to hunt in Germany never die, say Brandt Gardner, left, Baumholder’s Rod and Gun Club director. In fact, it takes just a couple of months to pass the hunting test and to get hunting guns cleared, said Capt. Paul Templeton, right, who’s been hunting in the area for a year. (Terry Boyd / S&S)

Myths about how it’s impossible for Americans to hunt in Germany never die, say Brandt Gardner, left, Baumholder’s Rod and Gun Club director. In fact, it takes just a couple of months to pass the hunting test and to get hunting guns cleared, said Capt. Paul Templeton, right, who’s been hunting in the area for a year. (Terry Boyd / S&S) Going through the hunting test that qualifies Americans in Germany opened doors to seeing places tourists never see and meeting Germans the average American never gets a chance to meet, said Pfc. Christopher Miller. Moreover, his wife, Jennifer, went with him, and the two found that hunting in Germany is far from a men-only world. (Terry Boyd / S&S)

BAUMHOLDER, Germany &#8212; Brandt Gardner has heard all the myths about bureaucracy and legal hurdles making it impossible for German-based Americans to hunt.

&#8220;All these things are wrong,&#8221; said the head of Baumholder&#8217;s Rod and Gun Club, and a longtime liaison between the 1st Armored Division community and local hunters and landowners in the forests and mountains of Germany.

Those misconceptions are causing a lot of hunters to miss out not just on exceptional hunting, but on an unrivaled cultural experience, say soldiers and officers.

A year of hunting around Baumholder has left Capt. Paul Templeton of the 47th Forward Support Battalion, deeply impressed. The roe deer in Germany may not be as big as the white-tailed deer back home in eastern Iowa, &#8220;but there&#8217;s more of them,&#8221; said Templeton, who rates hunting in Germany as better than in North Carolina or Louisiana, where he was posted before.

But the experience Templeton and other American hunters are most struck by has less to do with hunting than with the age-old German traditions around the hunt.

Traditions start with the hunter&#8217;s greeting &#8220;waidmannsheil&#8221; and the &#8220;waidmannsdank&#8221; reply, said Templeton, and goes to the last horn blown in the traditional post-hunt salute to the animals harvested, and to the hunters who return home safely.

Templeton said he was most impressed by the camaraderie extended to him by the local hunters &#8212; most of whom are professionals including doctors, lawyers and military officers &#8212; at post-hunt ceremonies. Food, drink and friendship flow to everyone from the hunt king, who bags the most game, to volunteer beaters who flush out game during big hunts, Templeton said, a point echoed by Pfc. Christopher Miller.

The most memorable part of hunting in Germany has been the cultural experiences, said Miller, 20, from Hyde Park, N.Y. Hunting has taken him and his wife, Jennifer Miller, &#8220;to places tourist would never go,&#8221; to sharing traditional hunter ceremonies with Germans .

Getting there wasn&#8217;t all that difficult, Christopher Miller said.

Assigned to the 123rd Support Battalion at Baumholder, a chance meeting with Gardner ended up with the couple going through the hunting class together. After a few months and about $200 per person for the class, the hunting license and insurance, they were in the field.

Hunting class &#8220;was easy and fun&#8221; with in-depth information, far more in-depth than hunting classes in the States, Miller said. That&#8217;s because the hunting experience is unlike any in the States, heavy on tradition and conservation, he said.

With open farmland and forests, the region around Baumholder is an outdoor enthusiast&#8217;s Valhalla; offering an amazing variety of game, say Gardner and local hunters. With only a few weeks of restrictions &#8212; hunting wild boars is limited in June, for example &#8212; &#8220;there is something to hunt here 365 days a year, 24 hours per day!&#8221; Gardner said.

Instead, Gardner said he&#8217;s nowhere near the 40-or-50-hunter maximum the Maryland native said he could manage while still keeping service personal.

Gardner recently got a call for a landowner looking for people for a boar hunt, then contacted Army officials in Heidelberg and Kaiserslautern. He got no takers even after the hunt was posted on Army Web sites.

For the few who know, the amazing thing about hunting in Germany is that they&#8217;re doing it after hearing all the reasons it&#8217;s impossible, said Templeton and Miller.