Hundreds race from Darby to Pisa 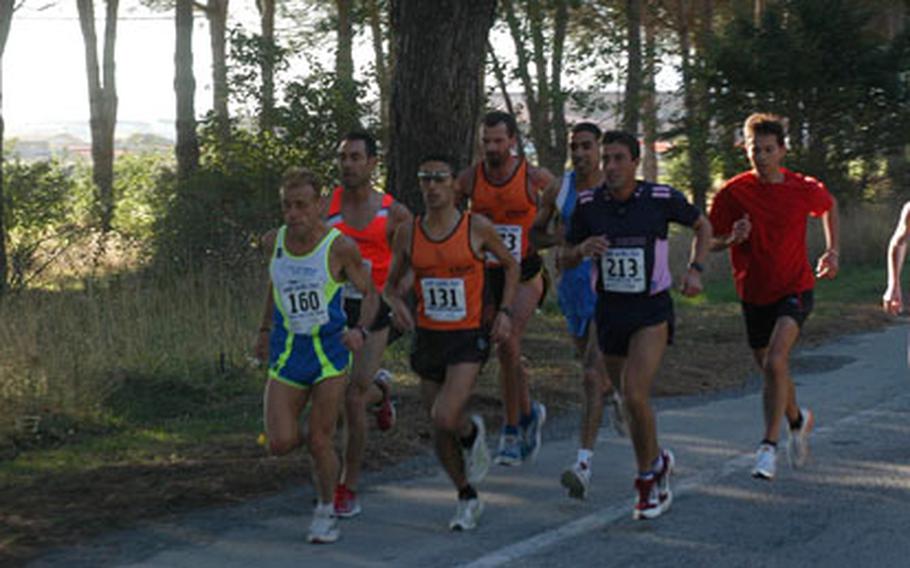 It didn’t take long for the lead group of runners to separate from the pack Friday during the 25th Run to the Tower, a 12-kilometer race from Camp Darby to the leaning tower of Pisa. The first part of the course had competitors running along Via Del Mare in and out of the shade of the area’s umbrella pine trees. (Kent Harris / S&S)

It didn’t take long for the lead group of runners to separate from the pack Friday during the 25th Run to the Tower, a 12-kilometer race from Camp Darby to the leaning tower of Pisa. The first part of the course had competitors running along Via Del Mare in and out of the shade of the area’s umbrella pine trees. (Kent Harris / S&S) 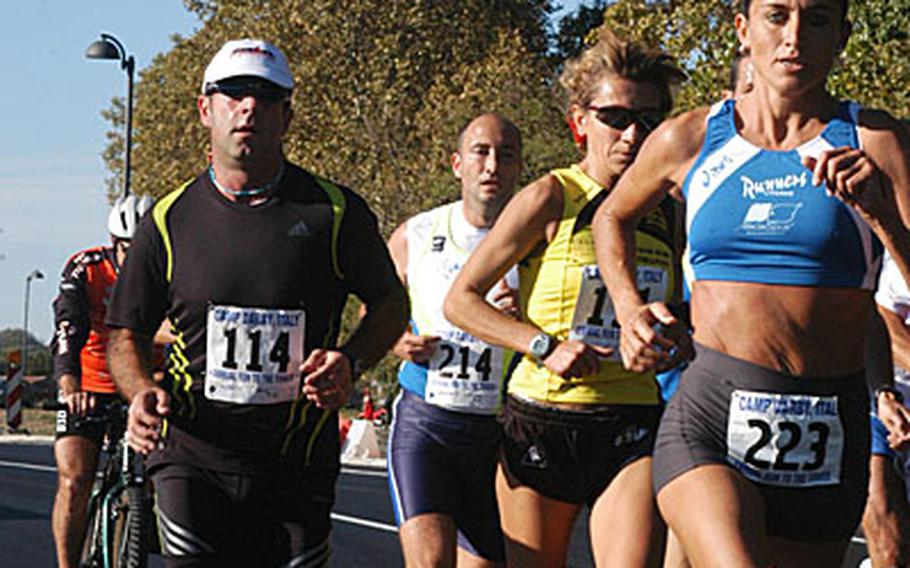 Federica Barsotti, the first female runner across the finish line Friday in the 25th Run to the Tower, leads a group of runners near the race’s halfway point. She finished in 46 minutes, 12 seconds -- good enough for 20th overall. (Kent Harris / S&S)

Salah Elghilnay, a Moroccan living in the Pisa area, was among those in the former category. He finished the 12-kilometer course that started at Camp Darby and ended at the foot of the famous leaning tower in 38 minutes and 50 seconds &#8212; 11 seconds faster than his nearest competitor.

About two dozen members of the 13th Military Police Company from Vicenza were in the other category.

Italians traditionally dominate the annual run. This year that was even more of the case, with the next 14 runners after Elghilnay all being Italian citizens.

Huseyn Kara, a 49-year-old military retiree who works at the central issuing facility in Vicenza, broke that streak by becoming the first American to cross the line in 45:33.

Capt. Stephanie Feagin, executive officer at U.S. Army Health Clinic-Livorno, was the first active-duty servicemember across the finish line in 47:29. She was the third woman to finish, but the top U.S. troop for the second straight year.

Feagin, 27, competed in the Army Ten-miler as well, but said she&#8217;s not as passionate about running as she used to be.

A few Americans were scattered among the top finishers in other categories, including boys 17 and younger, in which Matthew O&#8217;Brien, Frank Hernandez and Gabriel Babin took the first three spots.

The course, which begins on base near the main gate, is almost entirely on asphalt. Friday&#8217;s race was held under a cloudless sky, with the area&#8217;s famous umbrella pine trees providing some shade during the early part of the course.

Local police blocked off portions of the roads that connect the base to Pisa and shepherded the runners through traffic until they got to the tower complex. Authorities had a lane blocked off so runners didn&#8217;t have to wind their way through the tourists gathered around the leaning tower. Many race participants got an ovation or found themselves in a tourist&#8217;s lens as they neared the finish line.